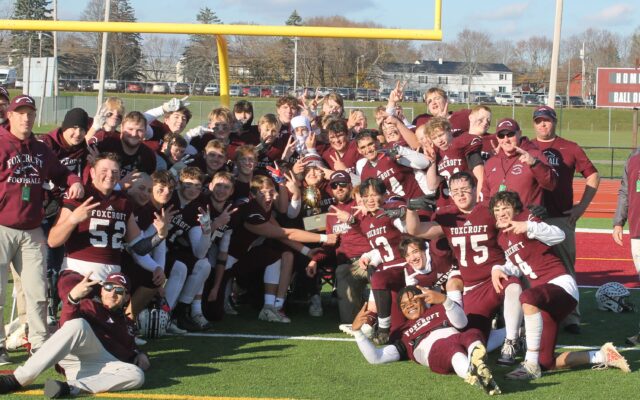 Stuart Hedstrom • November 21, 2022
BANGOR — After winning its first two playoff games by a combined score of 101-0, Foxcroft Academy found itself leading Lisbon High School 28-0 early in the second quarter of the 2022 Class D championship at Cameron Stadium on Saturday, Nov. 19.

BANGOR — After winning its first two playoff games by a combined score of 101-0, Foxcroft Academy found itself leading Lisbon High School 28-0 early in the second quarter of the 2022 Class D championship at Cameron Stadium on Saturday, Nov. 19. But unlike a 69-0 quarterfinal victory vs. No. 8 Madison Area Memorial High School and then a semifinal 32-0 victory vs. fourth-seeded Winthrop High School, the No. 3 Greyhounds would mount a comeback against the top-seeded Ponies.

Lisbon got to within 28-22 following touchdowns on three consecutive possessions, but Foxcroft took advantage of a fumble recovery at the Greyhound 1-yard line and made a stop on fourth down in the red zone to earn a 41-22 victory and claim the state championship for the second year in a row. The state title is the ninth overall in program history and the first to be back-to-back.

In Foxcroft Academy athletic history the school has had three state championship runs. Girls cross country won Class C titles in 1993-94 and wrestling won Class C crowns in 2004-05 and then three in a row from 2011-13.

The Ponies finished the season at 10-1, having won eight games in a row since falling to Lisbon 14-13 at Oakes Field back on Sept. 23. The Greyhounds end 2022 with a record of 7-4, having won four games in a row and seven of eight before Saturday. The 41 points given up ties Lisbon’s season-high, the team lost 41-20 to Class C York High School.

Foxcroft junior quarterback Wyatt Rayfield scored on a pair of short touchdown runs in the opening quarter, from the 3- and 4-yard lines. Senior Caden Crocker had a 51-yard scoring run in the second quarter — immediately after his halfback pass to freshman Lucas Sands was called back due to an illegal forward pass — and junior Kemsley Marsters added a 28-yard touchdown to help build the 28-0 lead at the 8:31-mark of the second quarter.

“The whole idea was we were going to put the ball in our playmakers’ hands and get the ball to Caden Crocker early in the game so he could have his impact quick and force their hand a little bit defensively,” Foxcroft head coach Danny White — who now has guided the Ponies to three state championships in his 14 seasons — said. “We were able to build a big enough lead so that when (Lisbon got back into the game) we were able to have enough of a gap so we could keep the separation and that was huge for us.”

In the regular season matchup Lisbon used its running game to keep the ball away from the Pony offense, with 61 of the team’s 63 plays coming on the ground and the 63 total more than double the 27 offensive snaps Foxcroft had all that evening.

With the exception of one incompletion, Lisbon kept the ball on the ground for 14 plays to move the football 80 yards before a 2-yard touchdown rush by senior Josh Carter. His 2-point conversion made the score 28-8 in the final minute of the first half.

The Greyhounds found the end zone on the first drive of the third quarter as senior Colby Levasseur ran the ball in from six yards out. He was tackled at the line scrimmage to keep the score 28-14 at the 5:37 mark.

White said his team knew the opposition would have momentum coming out of the locker room after scoring its first touchdown just before the break.

“Hats off to them, they did a great job marching down the field,” he said, saying that if Lisbon did find the end zone it would likely have come after taking a lot of time off the clock. “We didn’t want to give up a big play” but instead “force them to have a 10-12 play drive and use seven minutes. We were happy with that at that point. Sure we wanted a stop but we were content.”

The Greyhounds gambled with a short kickoff and this worked in the team’s favor with the loose football recovered at the Pony 39-yard line. Eight plays moved the ball to the Foxcroft-8, including a first down by the nose of the football on a quarterback sneak from junior Jimmy Fitzsimmons on a fourth-and-1. A play later Levasseur ran the ball in for the touchdown and Carter’s 2-point conversion run made the score 28-22.

Levasseur gained a game-high 170 yards on the ground in 30 carries, while Carter rushed for 106 in 26 attempts. The backfield pair accounted for all but 18 of their team’s yardage.

Lisbon’s defense forced a three-and-out from midfield as Marsters punted the football away. The pigskin hit the artificial turf and rolled toward the goal line, nearly going into the end zone but after conferring the officials ruled it was downed inside the 1 and was not a touchback.

Instead of having possession at the team’s own 20, Lisbon snapped the ball from as deep in its own territory as possible. Levasseur lost the ball on the ground and Foxcroft came up with the recovery a yard away from the end zone.

The Ponies needed only one play to take advantage of the miscue as Crocker dove up the middle and in. A Rayfield rush for two was stopped outside of the end zone but Foxcroft led by two possessions again at 34-22 in the final minute of the third quarter.

“Special teams wins and at the end of the day we were able to execute on special teams when we had to,” White said.

He said the team needed to maintain focus after Lisbon’s three touchdowns. “We were fortunate to be in the spot we were in with the lead,” White said. “We could withstand some bad things happening, but in order to do that we needed to maintain our focus and that wavered at times — that happens in competition. We just stayed true to the game plan. Ultimately it was just about the kids finishing the plan we put in place and they did it.”

The focus was maintained at the end of the ensuing drive as Lisbon kept advancing the ball on Carter and Levasseur rushes helped move the football inside the red zone for a fourth-and-4 at the Foxcroft-13. Levasseur got the football on fourth down and he ran past the line of scrimmage but was tackled for only a 1-yard gain as Foxcroft took over on downs with 7:40 on the clock.

The defensive stand paid off as six plays moved the ball 84 yards to the opposition’s 4-yard line, 59 of these came on a Rayfield to Crocker shovel pass. The senior slot back got the ball on second-and-goal from the 4, and he ran in for his third touchdown of the day and his team’s sixth.

Crocker finished with seven receptions for 102 yards and he carried the football eight times for 77 yards and three touchdowns. The seven catches made up the bulk of Rayfield’s 10 completions on 10-of-12 passing for 119 yards. The quarterback also gained 34 rushing yards in six attempts with his two first-quarter touchdowns.

“He’s everything that you want as a player, as a leader, as a kid,” White said in praising Crocker. “He is the epitome of what you’re looking for in high school football.”

In the regular season matchup Crocker only appeared in seven early offensive snaps before leaving with an injury in what turned out to be the only Foxcroft loss in 2022 and 2021.

“The kids were hungry, we moved on very quickly from that loss,” White said. “It hurt, it stung but at the same time it was ‘you’re not going to go undefeated, your goals are still intact.’ It’s just how mentally tough are you to move forward and they did.”

“For our school it’s history, it’s never been done,” White said about the back-to-back gold balls. “I think for high school sports winning a state championship is pretty remarkable in of itself. Two in a row, we feel very blessed and fortunate.”

The Ponies are the first Class D team to reach consecutive finals since Wells High School won it all in 2017 and 2018 (both were victories over Foxcroft under the old South/North format before the launch of 8-man football vastly reduced the number of Class D programs across the state). For Foxcroft the consecutive state championship game berths were the first for the program since the Ponies played in three Class C championships in a row from 2005-07. Lisbon won the 2005 and 2006 gold balls over the Ponies and Foxcroft defeated Boothbay Regional High School in the third game of this run.

The 2022 Class D championship is the ninth in program history for Foxcroft as the team has played in different classes over the decades based on enrollment and/or the number of different divisions of football offered by the Maine Principals’ Association. The Ponies were part of a four-way tie for the Class D title in 1963 and had sole possession of the 1983 Class D championship. Foxcroft claimed Class C championships in 1967, 1996, 2003, 2007, and 2012 before winning the Class D title in 2021.

Lisbon was playing for its first state championship since winning the 2019 Class D crown. That championship was the 11th overall in school history, a run that includes Class C championship game victories over the Ponies in 1997 and 2005 and 2006.