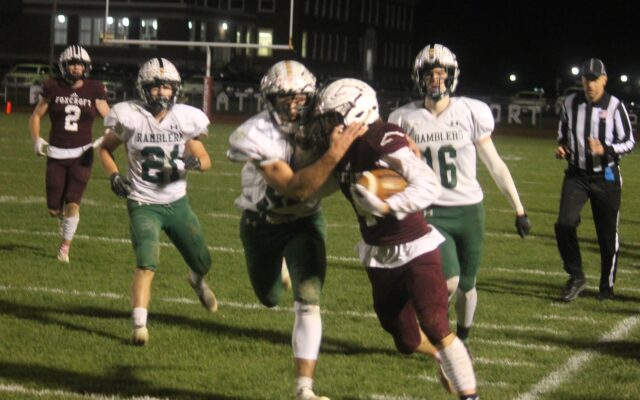 The Ponies (now 9-1 with the team’s seventh consecutive victory) built a 32-0 lead and won by this margin to advance to the program’s second consecutive state championship. A year ago Foxcroft defeated Winthrop 19-16 to claim the Class D gold ball.

Foxcroft will face No. 3 Lisbon High School (7-3 with four consecutive wins) as the Greyhounds defeated second-seeded Freeport High School 28-21 on Saturday, Nov. 19. Lisbon is the only team to defeat Foxcroft in 2022, winning 14-13 in Dover-Foxcroft on Sept. 23. The state championship is scheduled for Saturday, Nov. 18 at Cameron Stadium in Bangor – with kickoff at 11 a.m.

The Ponies are the first Class D team to reach consecutive finals since Wells High School won it all in 2017 and 2018 (both were victories over Foxcroft under the old South/North format before the launch of 8-man football vastly reduced the number of Class D programs across the state). For Foxcroft the consecutive state championship game berths are the first in program history since the Ponies played in three Class C championships in a row from 2005-07. Lisbon won the 2005 and 2006 gold balls over the Ponies and Foxcroft defeated Boothbay Regional High School in the third game of this run.

Against Winthrop (6-4) the Foxcroft defense posted its second consecutive shutout after defeating Madison Area Memorial High School 69-0 a week prior in a quarterfinal contest and third of the season, and held Winthrop scoreless for the first time in 2022. The shutout was made against a team that had scored the most points against Foxcroft this season. In week one the Ponies won at Winthrop 28-27 in overtime.

Aside from the all-important totals on the scoreboards, Foxcroft had a noticeable advantage in other statistics including out gaining the Ramblers 254 to 62 in yards, running 47 plays to the opposition’s 28, and having more than double the number of first downs at nine to four.

The Foxcroft defense forced Winthrop into a three-and-out on the game’s opening series after the visiting team elected to receive, and a 12-yard punt return by junior Kemsley Marsters set the Ponies up at the Rambler 39-yard line. Three plays moved the ball 32 yards for a first-and-goal, where junior quarterback Wyatt Rayfield and senior Caden Crocker connected on a pitch pass behind the line of scrimmage Crocker took to the end zone seven yards for what would turn out to be the winning touchdown just about four minutes into the game.

The Ponies forced a Winthrop punt on the ensuing possession, after one first down, but the snap was off and Rambler senior Isaac Oliveira was tackled at his team’s 29-yard line about 14 yards shy of the first down marker.

A flag for a block in the back helped prevent Foxcroft from reaching the end zone and the team soon faced a fourth-and-9 at the 17. The Pony field goal unit came onto the field and Marsters drilled a 35-yard kick to give his team a 10-0 lead.

Another three-and-out early in the second quarter helped keep Winthrop down by multiple possessions. Foxcroft took advantage of great field position by moving the football from the Rambler-41 to the 6 in five plays. Crocker took the handoff and he ran off right tackle for his second touchdown of the first half.

Crocker finished with more than 100 yards on offense including a receiving and a rushing touchdown. He caught six passes from Rayfield for 93 yards (making up the bulk of Rayfield’s 10 completions for 111 yards) and gained 26 yards in seven rushing attempts. Crocker also had a third-quarter interception at midfield on a deep halfback pass by Winthrop senior Nick Keezer.

Facing a fourth-and-3 in the second quarter, the Winthrop offense stayed on the field and senior quarterback Owen Harding called out a cadence in an attempt to draw the Ponies offsides. The defense stayed disciplined and did not move across the line until the snap, at which point Harding was smothered up at the line of scrimmage.

This led to the only one of the first six possessions Foxcroft did not score on, as instead the team ran off nearly three minutes of clock to preserve a 17-0 lead.

Rayfield found junior Jadon Richard open in the end zone for a 10-yard touchdown on the opening drive of the second half for his second touchdown pass of the night.

This was followed by another three-and-out by the Foxcroft defense to set up a punt from the Rambler 22-yard line. The snap was off, going over Oliveira’s head. He was tackled in the end zone for a safety as the Pony defense got into the scoring with two points of its own.

Marsters returned the free kick from the Pony-39 to the Winthrop-34 and five plays later Foxcroft had a first down just inside the red zone. A rush by Marsters beyond the 5-yard line was negated by a holding penalty to move the line of scrimmage back to the 22-yard line. The flag turned out to be inconsequential as Marsters ran all the way to the end zone for the final touchdown of the evening.

He gained a game-high 50 rushing yards on seven attempts. Marsters’ touchdown, field goal, and three PATs gave him 12 points on the evening.