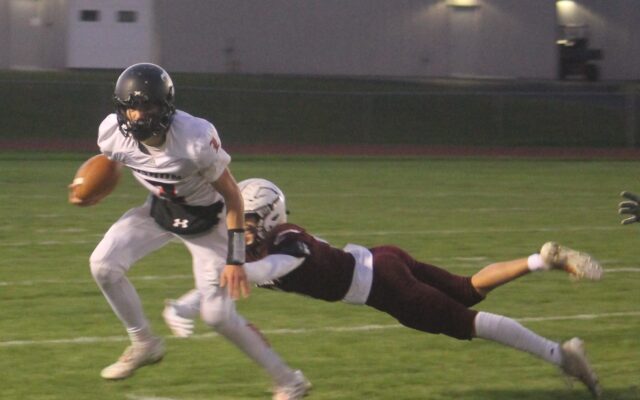 Lisbon keeps it grounded in 14-13 win over Ponies

Stuart Hedstrom • September 26, 2022
DOVER-FOXCROFT — During a Class D football contest on Sept. 23, the visiting Lisbon High School Greyhounds (just about literally) ran 63 plays with 61 of these coming on the ground en route to a 14-13 victory over the Foxcroft Academy Ponies.

DOVER-FOXCROFT — During a Class D football contest on Sept. 23, the visiting Lisbon High School Greyhounds (just about literally) ran 63 plays with 61 of these coming on the ground en route to a 14-13 victory over the Foxcroft Academy Ponies.

The five dozen-plus rushing attempts helped the team keep the ball out of the hands of Foxcroft Academy offense, which had just 26 plays all evening, and limit the scoring opportunities of a team that put up 74 a week prior.

Despite the visitors’ strategy, the Greyhounds were still in a dogfight as the team overcame a 7-0 deficit to lead 14-6 in the fourth quarter behind a 2-yard touchdown run from senior Cody Levasseur with 7:39 to go.

A wind-aided kickoff resulted in a touchback as Foxcroft took over at the Pony 20-yard line. The team used eight plays to get down to the Lisbon-1, including three receptions by junior Jackson Smith as part of his game-high four for 68 yards. The last was a 24-yard play from junior quarterback Wyatt Rayfield that ended with Smith being dragged down by the left pylon.

After no gain on 1st-and-goal, Rayfield took the shotgun snap and ran up the middle into the end zone for the touchdown at the 3:45 mark. Junior Kemsley Marsters followed by kicking the PAT through the uprights to, for the moment, tie the game at 14 apiece, but Lisbon ended up being flagged for encroachment on the point after.

Foxcroft opted to accept the penalty and have the ball at the Lisbon-1.5 for the opportunity to score two and take the lead rather than have the contest be tied in the final minutes.

On the 2-point try Rayfield handed the ball to senior Cameron Chase as he ran left. Lisbon defenders got past the line of scrimmage and tackled Chase for a loss as the Greyhounds remained ahead by the single point.

A on-sides kick went out of bounds and Lisbon took over at the team’s 49. The Greyhounds kept the football in Levasseur’s grasp – he rushed 22 times for a game-high 90 yards – as he gained eight yards in three carries to set up a 4th-and-2.

After a Pony timeout to stop the clock at 1:52, Lisbon lined up and tried to draw the defense offsides before a Greyhound timeout just before the play clock expired. Senior Josh Carter got the carry – the last of his 23 attempts for 88 yards – but he was stopped shy of the sticks.

Lisbon was otherwise 3-of-3 on fourth down in the second half, including both touchdowns from two yards out. The team was 5-of-9 overall on fourth down, only lining up in punt formation once all game but this ended up being a fake punt with the runner tackled shy of the first down marker to start the second quarter.

Foxcroft took over at the team’s own 42-yard line with 1:46 to work with. A 10-yard completion to junior Jadon Richard resulted in a quick first down, and Smith followed with an 11-yard reception to the Lisbon-39.

The Ponies kept throwing as Rayfield found freshman Lucas Sands along the right sideline near the first down marker. The officials ruled Sands’ momentum took him out a just shy at the Lisbon-25 for a 2nd-and-inches.

The Greyhound pass rush then got to Rayfield as a sack dropped Foxcroft back five yards. On third down the pass was incomplete, as was the throw on 4th-and-6 to end the game barring a Lisbon kneel down.

Lisbon got the ball to start after Foxcroft deferred to the second half and the Greyhounds used a 12-play drive to advance to the Pony-24 for a 4th-and-6. Here the Greyhounds threw the first of two pass attempts, but the football sailed over the intended receiver’s hands down the field.

Foxcroft needed just two plays for 76 yards to find the end zone. First Chase ran 53 yards from the Foxcroft-24 to the Greyhounds’ 23 – he led the Ponies with 84 rushing yards on only six carries. Rayfield followed by finding Richard for a 23-yard touchdown with a Marsters PAT putting the team ahead 7-0.

Lisbon would force three turnovers, a fumble in the second quarter and then an interception and fumble in the third quarter. The second half turnovers both led to Greyhound touchdown drives.

Lisbon (2-2 with the team’s second consecutive victory) handed the Ponies (2-1) the team’s first loss of 2022 and broke what was the longest winning streak among all Maine high school football teams at 13 games. The Ponies went 11-0 a year ago en route to winning the Class D championship, and with no tackle season in 2020 the program’s last defeat was a 2019 Class D semifinal game at Bucksport High School.

Next on the schedule for Foxcroft is John Bapst Memorial High School of Bangor (3-1), with the game taking place on the artificial turf at Husson University at 7 p.m. on Friday, Sept. 30.