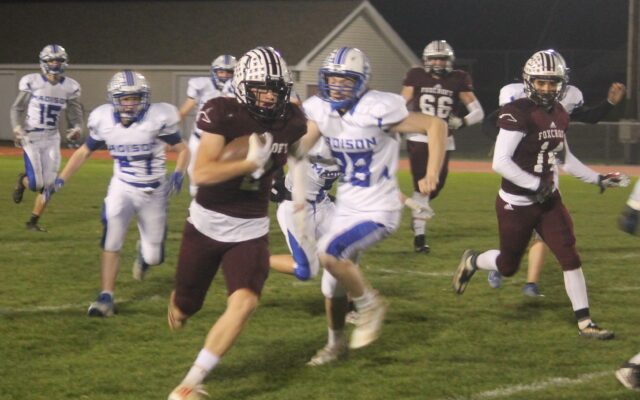 Stuart Hedstrom • November 6, 2022
Ponies to host No. 4 Winthrop in semifinal DOVER-FOXCROFT — Foxcroft Academy found the end zone seven times for a 48-0 lead in the opening quarter of a Class D quarterfinal vs.

Ponies to host No. 4 Winthrop in semifinal

DOVER-FOXCROFT — Foxcroft Academy found the end zone seven times for a 48-0 lead in the opening quarter of a Class D quarterfinal vs. Madison Area Memorial High School on Nov. 4. The big early advantage helped the top-seeded Ponies earn a 69-0 victory – the team’s sixth in a row — over the No. 8 Bulldogs to advance to the semifinal round where Foxcroft is scheduled to host fourth seed Winthrop High School on Friday, Nov. 11.

Against Madison (the team fell to 1-8 with its eighth consecutive defeat) now 8-1 Foxcroft followed four first quarter punts with scoring drives starting from inside or just about at Bulldog territory and then lasting all of two plays before reaching the end zone. The Ponies also brought an interception and punt back for a score and followed a fumble recovery with a touchdown.

The Foxcroft defense – which earned its second shutout of the season — started off by forcing a three-and-out and subsequent punt. The Ponies would finish the night holding Madison to only 4-of-27 passing for 22 yards with a pair of interceptions.

The football was downed at exactly the 50-yard line and on first down junior quarterback Wyatt Rayfield threw a quick pitch pass to senior Caden Crocker coming across in pre-snap motion. Crocker would not be tackled until he reached the Madison-10. A play later senior Cameron Chase ran up the middle for the touchdown.

A few plays later Madison threw on 3rd-and-10 and junior Jadon Richard picked off Bulldog junior Brode Strout at the Bulldog-35. Richard ran the other way to get across the goal line and a PAT by junior Kemsley Marsters made the score 14-0 just 1:28 into the game.

Foxcroft was just getting started by forcing another punt, and then Marsters carried the football twice to first gain 16 yards and then he had a 35-yard touchdown run.

Crocker would score his second touchdown in less than five minutes as he returned a Bulldog punt 43 yards into the end zone.

He had another touchdown on a 2-yard pitch pass reception from Rayfield. Crocker ended up scoring on two of the three times he had the football in his hands, with two receptions for 42 yards and the punt return touchdown.

Rayfield had pitch pass touchdowns on three of his four competitions. He ended the night 4-of-5 for 98 yards with three touchdowns and one interception on a deep ball thrown into the endzone. Later in the first quarter he and Richard connected on a 16-yard pitch pass touchdown and Rayfield’s pitch pass to sophomore Silas Toposki resulted in a 40-yard scoring play to help set up the 48-0 lead.

With the end result essentially settled early on, Foxcroft’s reserves got to see the bulk of the action. In Class D all eight teams qualify the playoffs whereas some other divisions across Maine feature bye weeks for high seeded schools.

Freshman Landon Smith carried the football seven times to gain a game-high 110 yards. Junior Jacob Johnson rushed six times for 21 yards, including a 5-yard touchdown run on a toss to the right in the second quarter.

Following a botched special teams play in which Madison could not get the punt off near its own endzone, Foxcroft took over at the Bulldog 5-yard line. On first-and-goal sophomore Justin Gibbs went up the middle for a touchdown.

Freshman quarterback Griffin Caruso scored his team’s 10th and final touchdown of the evening in the third quarter (the second half had the running clock rule in place). A pair of Smith runs moved the ball from the Madison-40 to the 9-yard line for a third-and-1. On third down Caruso gained the first and he kept going to reach the end zone.

Kickoff for the semifinal against Winthrop is scheduled for 7 p.m. on Friday, Nov. 11 and the game will be a rematch of the 2021 Class D championship which the Ponies won 19-16.

Foxcroft began the 2022 season playing at Winthrop (6-3) more than two months ago back on Sept. 2. The two teams went to overtime and the Ponies came out on top 28-27.