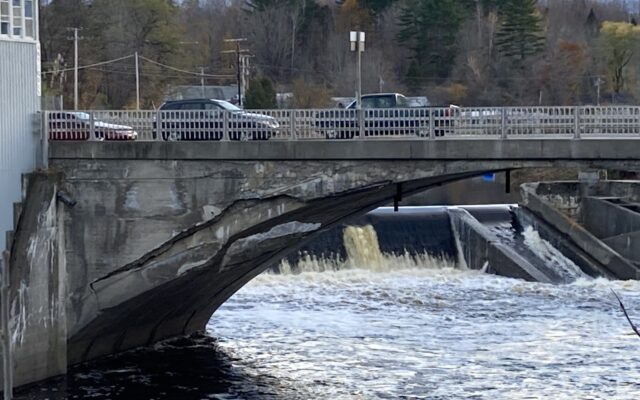 Valerie Royzman • November 9, 2021
DOVER-FOXCROFT — Maine Department of Transportation engineers are expected to remove unstable pieces of concrete on a bridge along East Main Street in December, Town Manager Jack Clukey said during the Dover-Foxcroft Select Board meeting Monday. In the spring, the DOT will return for a repair that would include refacing the area where concrete appears to be crumbling, he said.

DOVER-FOXCROFT — Maine Department of Transportation engineers are expected to remove unstable pieces of concrete on a bridge along East Main Street in December, Town Manager Jack Clukey said during the Dover-Foxcroft Select Board meeting Monday.

In the spring, the DOT will return for a repair that would include refacing the area where concrete appears to be crumbling, he said. During both repair periods, the sidewalk along the bridge will be closed, along with adjacent parking areas.

The announcement about upcoming bridge repair work marks a specific plan and timeline following multiple visits from DOT engineers, who have been monitoring the bridge. Residents have wondered whether more immediate steps would be taken and how soon, especially with winter approaching.

“They don’t have concerns about the structural capacity of the bridge,” Clukey said, “but they want to repair it because they don’t want the condition to lead to deterioration.”

Clukey and Dover-Foxcroft Police Chief Matt Grant met with the DOT on Friday, Nov. 5, where they learned that to redirect pedestrian traffic, the crew plans to put a crosswalk on both ends of the bridge.

“It does sound like there will be a few weeks … where they’ll have to build some scaffolding to pour new concrete and structure into the voids that have been created,” Grant said.

The DOT also recommended that a replacement of the East Main Street bridge be considered after another major bridge — the Dover Bridge, which crosses the Piscataquis River on Essex Street — is fully replaced, likely sometime in 2025, Clukey said.

The repair in the spring will fix the bridge in a way “to extend the life of the bridge several more years,” though there currently is no timeframe for replacement, the town manager said after the meeting.

“They’re going to advocate for this bridge being in the queue” for capital projects, Clukey said.

During the meeting Monday, Select Board members also discussed a property at 72 Lincoln St. Earlier in the year, the Select Board approved a dangerous building order for the house and attached barn. Later, when a plan was developed to renovate the property, members decided not to act on the order and gave a prospective buyer a Nov. 1 deadline to remedy the property.

Brian Gaudet, code enforcement officer for the town, and Ken Salvucci, building inspector, visited the property on Nov. 2 to check on progress.

About 90 percent of the barn was torn down and removed, and much of the lot had been cleaned, including removal of debris and trash. The front porch had new decking and structural repairs. There was no progress on electrical, plumbing and heating systems. Gaudet also observed no remodeling related to appliances and furnishings.

The property owner was fully informed, before he purchased it, “how frustrated the residents of Lincoln Street are, how frustrated we are,” Select Board member Gail D’Agostino said. “What has it been, 30 years? It’s a dangerous building. And he agreed to everything, no problem.”

Barry Hutchins, who joined the Select Board recently, recused himself from the conversation because he lives near the Lincoln Street property.

The Select Board agreed to contact the current owner, Paul Shea — who is incarcerated, the police chief said — and reconvene to discuss next steps.

Regional School Unit 68 Superintendent Stacy Shorey updated the Select Board about the construction of a new central office building, which would be located on the SeDoMoCha School campus.

“The long-term cost will be about $1,000 for electricity and heat,” she said. “We’re planning right now on using some of the solar power from the fieldhouse, and that should save us about 15 percent, which is about $15,000 a year.”

Residents from Charleston, Dover-Foxcroft, Monson and Sebec will have a chance to vote in a referendum Dec. 7 to appropriate $550,000 for the central office project, which Shorey expects will be covered by federal funding.

The district has scheduled an information session for the public at 6 p.m. Nov. 29.

When RSU 68 received $1.7 million from the American Rescue Plan in August, the district discussed how to spend the funds with staff and the community. Shorey highlighted some of the ideas the district is moving forward with, including expanded spaces for special education and an alternative education program, stage lighting for drama, new furniture for classrooms, outdoor instruments for music, a new roof for SeDoMoCha Middle School and more.

The district was required to put 20 percent of the funding (about $350,000) aside to support students. It will be spent on tutoring and extended day programming twice a week, including transportation.