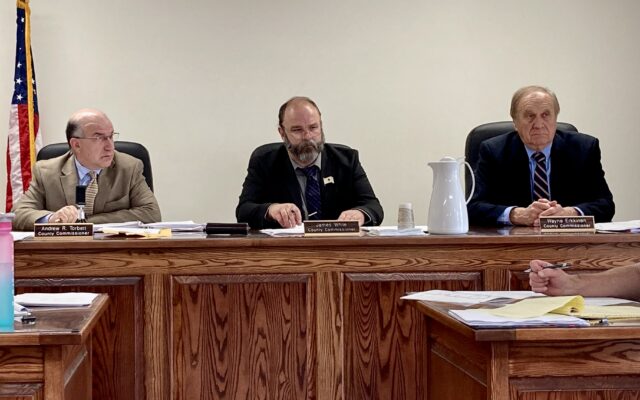 Valerie Royzman • May 4, 2022
DOVER-FOXCROFT — When a minor earthquake shook Sebec more than a week ago, Piscataquis County’s Emergency Management Agency director couldn’t get online to notify and update residents because of the spotty internet where she lives. “I could not get online from home in order to just update our webpage,” Director Jaeme Duggan said.

DOVER-FOXCROFT — When a minor earthquake shook Sebec more than a week ago, Piscataquis County’s Emergency Management Agency director couldn’t get online to notify and update residents because of the spotty internet where she lives.

“I could not get online from home in order to just update our webpage,” Director Jaeme Duggan said. “A lot of people heard it, felt it, thought houses were exploding because there was a bottleneck situation in our area [and] so many people jumped on Facebook.”

Duggan relies on the agency’s hot spot when she works from home, but the connection was poor when the earthquake struck.

Rural areas of Maine have long struggled with internet availability and function, especially in Piscataquis County with its mountainous terrain. On Tuesday, Duggan asked the Piscataquis County Commissioners to support using Starlink for emergency management employees to do essential work remotely. The earthquake was a perfect example of needing stronger resources in place for future emergencies, and Starlink would be a solution, she said.

The purchase and installation of equipment such as a downlink and modem would be covered by United States Department of Homeland Security funds that the agency receives annually, she said.

Duggan, Deputy Director Debra Hamlin and emergency planners John and Alsina Brenenstuhl would use the Starlink at their homes. Once the Homeland Security funding covers equipment costs, the employees would cover monthly expenses on their own, Duggan said.

“Costs have gone up since we first looked into [Starlink] in the fall,” she said. “The initial hardware cost was $599. The monthly cost is $110, which we as employees will pay.”

Duggan is the only one able to manage the agency’s website, social media and other tasks from home because she uses the hot spot. Hamlin has cable internet that works slowly and doesn’t allow her to download and upload information, Duggan said.

Starlink is the logical next step because it’s the most reliable option at this point, she said. A reliable connection matters not only for the agency to access the internet, but also to communicate with emergency management groups at the state and federal levels.

Commissioners rejected a request in February for $5,000 that would have allowed the county’s economic development council and a consulting firm to proceed with a broadband expansion project. Commissioners said they would dedicate American Rescue Plan Act funds to radio communications upgrades for the county’s emergency responders rather than invest them in broadband.

“All of the problems that you just mentioned about the internet at all three of your homes — none of those were addressed in the original internet study,” Chair James White said, referring to a $60,000 broadband planning study with which commissioners have expressed frustration. “None of them would have been remedied.”

Starlink is useful because it has the capability of being mobile, White said. For example, if a tornado strikes Piscataquis County and equipment needs to be moved five miles down the road to an area untouched by the natural disaster, the agency could do that, he said.

Commissioners gave the emergency management agency approval to move ahead with Starlink during a meeting Tuesday.