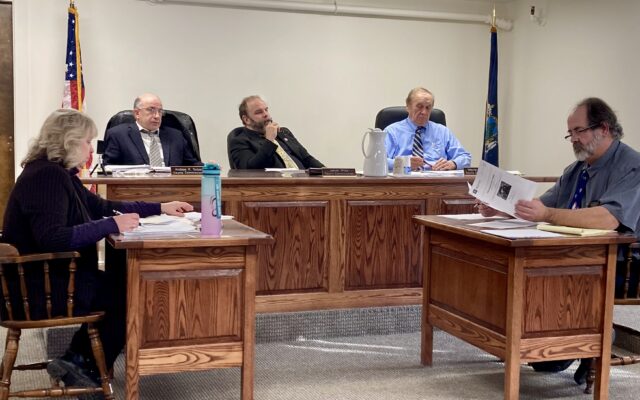 Casco Bay Advisers presented its findings on broadband infrastructure gaps throughout the county to commissioners Dec. 21. The consulting firm estimated it would cost from $22 million to $27 million to expand coverage to unserved areas.

At a meeting Tuesday, county commissioners discussed the Piscataquis County Economic Development Council’s recent request for $5,000. The funds, paired with another $5,000 from the PCEDC, would obtain a match to apply for a grant from the ConnectMaine Authority.

Commissioners almost voted to reject the request, but they ultimately tabled it to give PCEDC’s executive director, John Shea, a chance to attend the February meeting.

Piscataquis County provided a portion of the funding to hire the consulting firm and perform the broadband study, Chairman James White said. He was disappointed in the result because the study provided “a list of how many miles of wire it would take … and didn’t provide us with any options other than spending a bunch of money to run the wires,” he said.

Commissioners made it clear at the Dec. 21 meeting that they would prioritize emergency radio communications over broadband, White and Commissioner Andrew Torbett said.

Based on the excerpt that White read from the email, which he said town managers sent to him, Shea asked municipalities not to commit their ARPA funds to other projects until broadband needs in their communities have been identified.

Given commissioners’ feedback to Shea and the consulting firm, the email to town managers was disingenuous, White said.

“What I said at the end [of the conversation Dec. 21] to try to be conciliatory was, if there’s a way that we could layer the two with the priority being the communications, then we should look at that,” Torbett said.

ARPA funds need to be committed by Dec. 31, 2024, and they have to be spent by Dec. 31, 2026, County Manager Michael Williams said. “If you’re looking at something like six to seven years out [to get fiber in the county], that’s well past,” he said.

The chairman asked Williams to communicate to town managers that ARPA funds would not be designated for the broadband project at this time, and even if the commissioners decide the project is worth pursuing, they won’t dedicate half of their federal aid.

The broadband study completed in December provided a hypothetical funding strategy in which the county contributes half of its remaining ARPA funds, or 7 percent of total costs, Shea said Tuesday afternoon. Municipalities would give all of their ARPA funds (7 percent of total costs), state and federal funds would cover 49 percent and service providers would cover the remaining 37 percent, he said.

“While there are many ways to carve up these shares, it should be noted that the state of Maine’s strategy for broadband expansion assumed 50 percent from state/federal funding, which meshes well with this scenario,” he said.

Brownville’s emergency management director asked commissioners if they would be willing to commit funds to purchase a generator for the emergency shelter at Legion Hall. It would cost $9,525.

The town does not currently have its own emergency shelter because it shared with Milo for a number of years, Shawn Mitchell said. Due to populations growing and COVID-19 restrictions, the communities can no longer share a shelter.

With the help of the Piscataquis County Emergency Management Agency, the town has applied for grants, but it won’t have answers soon. It wants to order the generator because they’re from seven to nine months out, Mitchell said.

“The town is going to provide the facility in conjunction with the Legion, services for it, staff for it. … If we’re unsuccessful with getting a grant, we’re looking for some commitment from the county that they would assist,” he said.

Legion Hall — which is equipped with everything from space for overnight sheltering, a kitchen area and ADA accessibility, minus a generator — would help the town care for unorganized territories nearby, Mitchell noted. Brownville will support those communities regardless of the commissioners’ decision, he said.

Commissioners agreed to address the request at their next meeting.

Also at the meeting, they gave the Piscataquis County Sheriff’s Office the OK to purchase a 2022 Ford F-150 police responder vehicle for $36,229.