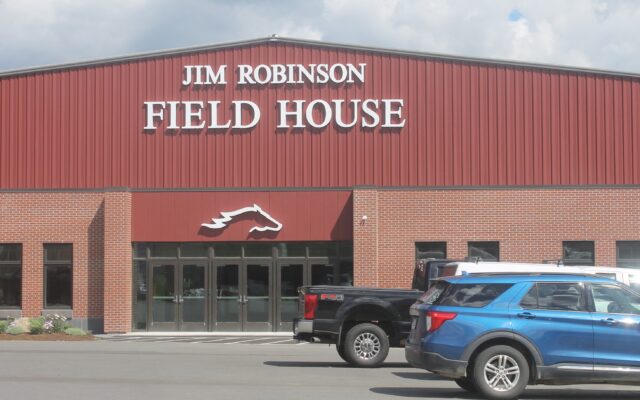 Stuart Hedstrom • December 7, 2022
DOVER-FOXCROFT — The roof of the newly-opened Jim Robinson Field House on Foxcroft Academy’s West Main Street campus will be the site of a rooftop solar project.  During the facility’s grand opening ceremony in August, UGE Vice President Tyler Adkins, a member of the Foxcroft Academy Class of 2003, said the field house will be topped by the largest rooftop solar installation in Maine with about 2,500 solar panels mounted.

DOVER-FOXCROFT — The roof of the newly-opened Jim Robinson Field House on Foxcroft Academy’s West Main Street campus will be the site of a rooftop solar project.

During the facility’s grand opening ceremony in August, UGE Vice President Tyler Adkins, a member of the Foxcroft Academy Class of 2003, said the field house will be topped by the largest rooftop solar installation in Maine with about 2,500 solar panels mounted. Adkins said energy produced by the panels will go into the grid and offset the power consumption of the entire Foxcroft Academy campus, as well as the entire RSU 68 facilities on the other side of town.

Project construction will be on-going with the panels potentially being up and running by March, but the RSU 68 school board voted to approve a contract with UGE during a Tuesday evening meeting at the SeDoMoCha School. The district joins the Foxcroft Academy Board of Trustees by formally approving agreements with the solar company.

RSU 68 Superintendent Stacy Shorey said the project will not have any costs for RSU 68 and the district will see a 15 percent savings on electric bills. She mentioned that a rate increase approximately doubled this expense for RSU 68 from $7,000 per month to $15,000.

The contract is for 20 years, but after the first five years, RSU 68 is able to withdraw at any time following a 90-day notice.

In other business, Shorey said work on developing the 2023-24 budget has started. She said information has gone out to staff on what they would like to see included in next year’s spending plan and administrators have met to discuss some of these ideas.

The finance committee will have its first meeting on Jan. 24. Shorey said RSU 68 usually gets its numbers on state funding at the end of January/early February, and the first draft of the budget should be ready in March.

The school board approved a calendar change to start the holiday vacation a day early for students. Wednesday, Dec. 21, will now be a professional development day. Shorey said the switch will reduce the number of days of classes by one to 176, which is still more than the 175 the state requires.

He said enrollment is 667 students as of that day, with a 294/373 split between the middle and elementary schools.

“I’m happy to report we did send home 45 meals for Thanksgiving,” he said, provided through the middle school’s all-inclusive food market. A similar number of meals are set to be given to students’ families for the holidays.

Gudroe said the second session of the after-school program will finish up later this month. He said the school would partner with Piscataquis Regional YMCA, Piscataquis Soil and Water Conservation District and University of Maine Cooperative Extension to offer enrichment opportunities during each week of the next after-school session. Previously there had been five weeks of academics and then a week of enrichment.

“We have not had to cancel any programs due to a staffing shortage,” Gudroe said.

The principal said 25-plus middle-schoolers would be caroling at the Hibbard Skilled Nursing and Rehabilitation Center, a first since before the pandemic.

Assistant Principal/Athletic Director Cameron Archer mentioned the Eagle basketball teams are off to a great start.

The A boys have a 3-1 record and roster of 14 players, A girls are 4-0 with 11 team members. The B boys are 2-2 with 14 players on the roster, and B girls are 3-1 with nine Eagles part of the squad. Archer said girls numbers are down slightly from recent seasons, but are still solid.

“Cheering has been present at all of our home games so far,” Archer said. He said the Eagle cheer squad has 17 members and will be taking part in some more competitions later in the season compared to years past.

The athletic director thanked everyone involved in winter athletics, which has allowed the gym to be at capacity and full concessions to be served, unlike the recent COVID-19-affected seasons.