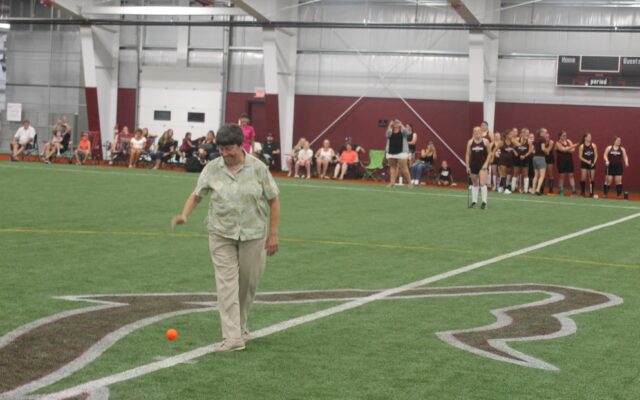 Stuart Hedstrom • August 12, 2022
FA alumni field hockey game christens Philpot Field DOVER-FOXCROFT — Foxcroft Academy student-athletes and the community will have a space to use for practices, activities and health and wellness year-round with the opening of the more than $7 million Jim Robinson Field House on Friday, Aug. 5, to kick off the school’s year-long Bicentennial celebration and the 2022 Alumni Weekend.

DOVER-FOXCROFT — Foxcroft Academy student-athletes and the community will have a space to use for practices, activities and health and wellness year-round with the opening of the more than $7 million Jim Robinson Field House on Friday, Aug. 5, to kick off the school’s year-long Bicentennial celebration and the 2022 Alumni Weekend.

The approximate 80,000-square-foot facility features artificial turf that is large enough to accommodate both field hockey and soccer games, inside a .2-mile, three-lane track around the building.

The field house is located on the western edge of the secondary school’s West Main Street campus, next to A.E. Robinson and a stone’s throw from the Piscataquis County Ice Arena.

Foxcroft Academy Head of School Arnold Shorey welcomed the grand opening attendees, “This is truly a community celebration as it took a community working together to raise the resources needed to construct this 80,000 square foot facility that supports a regulation size field hockey and soccer field. Over 400 donors pledged and contributed the funds to reach the original goal of $5.5 million and covered much of the overage caused by the pandemic.”

Shorey said many people were part of the “Building on Tradition” capital campaign, including the late Earl and Phyllis Wiley, who donated their home located between the school and A.E. Robinson to support the athletic facility.

He also thanked the Libra Foundation, which made it possible for the school to operate the ice arena.

The head of school said the Foxcroft Academy Board of Trustees led the planning and fundraising and were “role models in contributing 25 percent of the field house costs.” Each of the 19 trustees contributed “to support students, community, and for the love of the Academy.”

“This building, a wonderful facility, represents a tremendous opportunity for Foxcroft students,” said trustees Chairperson Dr. Richard Swett. He said the message to share is a thank you for the financial support, community support, and for coming to the grand opening.

He said he has read about a migration and influx to coastal Maine communities.

“I think that this facility and Foxcroft Academy in general are going to cause people to think hard and think twice about whether they really want to come to the coast because we have the facilities here that are equal to or superior to most any other place in Maine,” Dr. Swett said. “We have wonderful people who live here and we have plenty of room. I think this facility will be a strong driver of people moving to our area.”

Over the course of the presentation Shorey thanked many people who have been involved in the project, which began several years before the first construction in April 2021.

Gratitude was extended to the trustees’ building and grounds committee for its work overseeing the project.

Committee Chairperson John Wentworth said after all COVID protocols during planning and construction. “This is a breath of fresh air to be sitting here and looking at this fine facility.”

Wentworth said Foxcroft Academy has been actively investing in infrastructure for the last two decades, including building two dormitories and a new English wing, doubling the size of the tennis courts, upgrading the dining and food service areas, and improving the existing gymnasium.

He said it has been a challenge to accommodate all activities, such as basketball and indoor track. Wentworth said trustees looked at building an additional basketball court on the west side but quickly saw this would be cost prohibitive. After some brainstorming, an idea for a facility that could accommodate many teams was researched.

The process included looking at a campus location for a field house, but with grounds out back being too wet, the site of a former soccer field visible from the road was chosen. Wentworth said $2 million from the Libra Foundation got the project rolling and “then with the support of many folks right here in the community, many of you here today, it happened. It wasn’t easy, especially for the last two years with price increases, shortages, and supply chain issues.”

Sheridan Construction Corporation of Fairfield was the contractor and Jason Merriam, of Jason Merriam, Merriam Architects of Rockland, designed the building. Merriam said the 80,000 square feet “is enough space for 450 cars or 30 average sized homes or even a 747 if its wings were clipped.”

Merriam said brick on the facade was chosen to match the main academic building, and glass in the lobby makes it look more spacious to take away from what could have been the overwhelming field size. A mezzanine enables spectators to view from above, and translucent window panels allow for natural light.

“The project was completed at a high quality, on schedule, and drama-free,” Shorey said about Sheridan Construction.

Sheridan Construction Corp. Vice President of Construction Gil Thibeault said about 30,000 hours of labor was involved in the project. He told the audience the roof beams overhead weigh about 18 tons apiece, and about six acres was redone for the Jim Robinson Field House.

The building roof will be the site of a solar project.

“We’re actually about to start construction on the solar installation on the rooftop here,” said UGE Vice President Tyler Adkins, a member of the Foxcroft Academy Class of 2003. Adkins said the field house will be topped by the largest rooftop solar installation in Maine with about 2,500 solar panels mounted there.

He said work will start in the fall and go through winter to be operational in spring. “It’s a community solar project, so the energy produced by the panels will go into the grid and it will offset the power consumption of the entire Foxcroft Academy campus and also the entire (RSU 68) facilities on the other side of town,” Adkins said.

A long-term agreement between UGE and the two educational entities will provide power at a reduced rate for 20 years “So every time the sun shines our school districts get a discount on electricity,” Adkins said.

He said the solar project will generate 16,500 metric tons of offsets over its lifetime. “That’s about 40 million miles driven by car,” Adkins said.

“Generosity is essential to the success of a campaign,” Shorey said, asking those present to look at the Giving Wall in the lobby. “It’s very easy to add a name at any time.”

The head of school also said it was also very easy to raise money in the name of longtime field hockey coach and educator Gene Philpot, for whom the artificial turf field is named. Shorey said Philpot was a very successful coach — winning more than 350 games in her 35 years leading the Pony field hockey program, “but more importantly she’s a role model for students and adults alike. Kind, respectful, determined, professional, organized, and I could go on. It is rare to have the privilege to work with someone of the caliber of Gene Philpot, and there is no other name this field could be named after.”

“She is more than just a field hockey coach, she is a mentor and an educator, “ said Kelly Chase-Dennis, a 1999 Foxcroft Academy graduate. “She provided us with so many foundational skills.”

Residents Charlie Merrill and Jane Hibbard-Merrill gave the gift of the fieldhouse track. “In your honor, community members aged 65 or older will be able to use your track for free during walking times,” Shorey announced.

Speaking of Robinson, Shorey said, “His secret to success is treating employees like members of his own family. He cares for his employees, his family, and this community.”

Following the grand opening, the turf was used for the first time with the Foxcroft Academy alumni field hockey game. Philpot dropped the ceremonial first ball for many of her former players and other Ponies who took to the field after Philpot’s retirement to continue her legacy.