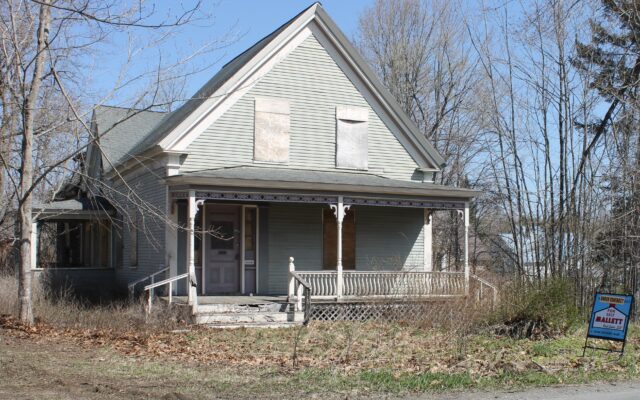 Stuart Hedstrom • March 29, 2022
DOVER-FOXCROFT — Planned demolition for the structure at 72 Lincoln St. has been halted for the next month while the sale of the property to a local business owner is pending.

DOVER-FOXCROFT — Planned demolition for the structure at 72 Lincoln St. has been halted for the next month while the sale of the property to a local business owner is pending. Late last year, the selectboard authorized the building’s demolition after a monthslong debate over whether the property, whose owner has been incarcerated, would be remedied and eventually occupied.

In a March 18 letter to the board, attorney Benjamin K. Cabot of Cabot Legal Services, LLC, said the owner’s representative contacted him and said that Cabot has initiated negotiations to see if the current owner might be willing to sell the property.

“I understand that an imminent destruction order has been issued such that the building could be demolished any day now; however, please consider this letter to be a written request to not proceed with removal of the building for at least 30 days so that I can complete due diligence regarding possible rehabilitation of the structure,” Cabot, a past member of the selectboard, wrote.

He has inspected the property and begun talking with contractors about potential work to save a portion of the house. Cabot said that the board would need to reverse its imminent destruction order, and “if I am able to purchase the property, I would anticipate forming a preliminary plan for saving the structure (if that is feasible), or a plan for demolishing it using my own resources, within 30 days of the transaction being finalized.”

“I know it’s become a big deal, it has been an eyesore for the town since the early (1970s) and I hope it’s not too late to do this in some fashion,” Cabot said during a selectboard meeting on Monday evening. His plan includes a new foundation for a salvageable portion of the home being moved and additions being made to the structure.

“My thought is if the ground is ready, to start digging conservatively June 1,” Cabot said, with this work being completed by July 1. He said the construction could be done within six months provided there are no major material supply issues.

“First and foremost the reason we kind of got involved in this, we were looking to downsize our family residence,” Cabot said. He said they would like to renovate their current home into a purely commercial property.

The 72 Lincoln St. property is under the auspices of First Choice Property Management, LLC, but Cabot said he could get the ownership signed over to him within the next few days. “We are trying to get this done immediately,” he said.

Cabot would assume responsibility for outstanding taxes and water and sewer and other property expenses, and he would need to refile permits as the new owner.

“It’s heartening to know there’s a plan to put some viable taxable property back on the tax rolls,” Selectperson Gail D’Agostino said. “That’s more promising than what we’ve seen in a long time.”

The board passed a formal motion asking town crews not to proceed with anything on the property for 30 days to give Cabot time to finish his transaction.

In other business, a public hearing has been scheduled for the next meeting on Monday, April 11, concerning a proposed moratorium ordinance pertaining to manufactured housing in the town’s Historic Districts.

Town Manager Jack Clukey said the planning board discussed the moratorium at its March 3 meeting. The focus was on Lincoln Street but has since expanded to include all Historic Districts while the town’s consultant Gwen Hilton drafts a moratorium.

“Basically it would put a halt to the issuing of permits for manufactured housing in the (Historic Districts),” he said.

“A moratorium is put into effect for an initial 6-month period,” the town manager said, with renewals possible. “That is time to look into the current land use ordinance for manufactured housing.”

Existing homes would be grandfathered, and Clukey said there are no proposed dwellings currently in the permitting process.

The board also approved a $165,000 bid from Clark’s LLC for the installation of a Grove Street culvert to address deterioration and erosion issues.

Clukey said two bids received earlier in the month both came in above budget. “We expected the project to come in at the low $200,000-range and the low bid ended up being $380,000,” he said.

He said the project scope has been revised with the contractor doing only the installation and the town supplying the materials. Clark LLC, which was the initial low bidder, would contract for $165,000 for installation and improvements. Town material expenses would be $99,000 for a total cost of $264,000.Clukey said a $125,000 DEP grant would go toward the Grove Street project.