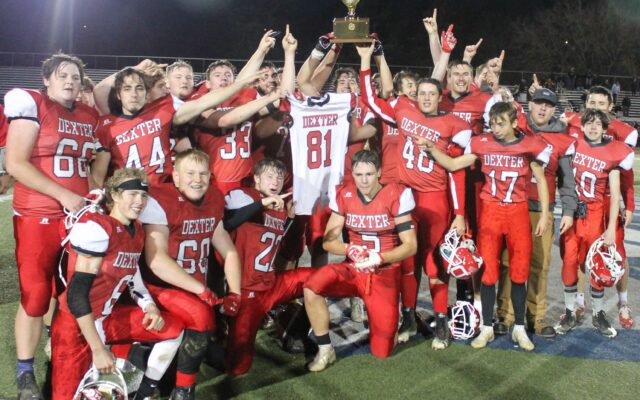 Stuart Hedstrom • November 15, 2021
Football title is first for Tigers since 1987 PORTLAND — History was assured heading into the game as Dexter Regional High School and Maranacook Community High School of Readfield squared off for the inaugural 8-Man Small School championship on the afternoon of Saturday, Nov. 13 on the turf at Fitzpatrick Stadium.

Football title is first for Tigers since 1987

PORTLAND — History was assured heading into the game as Dexter Regional High School and Maranacook Community High School of Readfield squared off for the inaugural 8-Man Small School championship on the afternoon of Saturday, Nov. 13 on the turf at Fitzpatrick Stadium. For the 2021 season 8-man programs were split into two divisions after just one state title was handed out in 2019 during the first year of the 8-player game in Maine.

Dexter (the team finishes at 7-2 having won seven of the last eight as the third seed in the North region) overcame a fumble trailing 30-28 in the fourth quarter by stopping the Black Bears (the South’s No. 5 seed who ended at 5-4) on fourth down. Maranacook looked to have converted on a fourth-and-7 completion, but the play was negated by a holding call.

Facing a fourth-and-18, Black Bear senior quarterback Chris Reid tried scrambling with no one open down the field. He was tackled only three yards beyond the line of scrimmage as the Dexter offense took over at the team’s own 41-yard line with 5:30 to go. The Tiger defense held Maranacook scoreless in the fourth and the final 18-plus minutes of game time after the South champions found the end zone four times in the first three quarters.

After six plays, Dexter faced a fourth-and-4 at the Maranacook-43. Here Connor found junior Will Kusnierz for a completion beyond the sticks as Kusnierz was tackled at the 26-yard line at the 1:11-mark. Kusnierz caught a game-high three passes for 50 yards.

Connor then ran for five yards — he led all players with 132 yards on the ground including a pair of touchdowns — as Dexter’s second timeout stopped the clock with 37.9 seconds remaining. After the break in the action, Connor kept the football and he ran for a first down to the Maranacook-15.

The Tigers took to the air on first down, but a pass intended for sophomore Wiliam Spratt in the end zone fell incomplete as the Black Bears called timeout.

On second down senior Nathan Schobel, back after missing the regional championship a week before due to an ankle sprain, gained a yard up the middle to move the football to the Maranacook-14. Despite the clock running, Dexter opted not to call another timeout despite still having one.

Connor took the snap and rolled to his left, looking for one of his three receivers to get open in the endzone. Planting his feet, avoiding the would-be tacklers as well as avoiding accidentally slipping as the buzzer blared, Connor scrambled back to the other side of the field.

He spied Gagnon at about the 5-yard line and threw the ball. Gagnon made his only reception of the game, cut inside toward the middle of the field for a clear path to the end zone as Dexter won its state championship since the Reagan Administration — more than a decade and a half before any of the current players were born.

“I hadn’t been doing much all game long, I was trying to get what I could get,” Gagnon said standing in the end zone where minutes earlier he scored the winning touchdown with the newly-presented gold ball in his hands.

“I just stood there. That’s all I did really, Bryce made the play. He was running around and I see him throw it right to me across the field.”

Gagnon said the designed play, waggle left, did not transpire as planned. “We’ve got about three receivers going that way and I’m the running back of course and I’m standing there for a check down and I’m just waiting. I thought he was going to get tackled, and I’m just standing there.”

Seeing the throw come his way Gagnon thought, “I got to catch it first, and get your eyes up field. I think there was like five defenders standing right there but it looked like they were stuck in mud and I ran around and cut it back inside the field.”

“I’m rolling out to my left, nothing’s open,” Connor said, also saying what happened was not how waggle left was intended. “I’m coming across the field, I have no clue. I didn’t know what I was going to do.  Hoping for a miracle and that’s what happened. I hit Avery over there and he went in, it’s just a miracle man.”

“He’s not even in the play and I come back to the other side and he’s an eligible receiver, so I hit him and he brought it in.”

The final score of 34-30 was the only lead for Dexter all game — the teams were tied 8-8 in the first. Nearly halfway through the third quarter Maranacook went up 30-20 on a 3-yard Reid rush, but the quarterback was tackled shy of the goal line by Connor and Gagnon to keep the score as it was.

Connor’s kickoff return put Dexter at the Maranacook-41, but three straight incompletions kept the ball right there. With Gagnon taking the long snap in punt formation, he threw rather than kick and found Connor for a 15-yard line completion and a new set of downs. Two plays later Schobel ran 12 yards up the middle for the touchdown. He ran the conversion in to make the score 30-28 at the 3:14-mark of the third quarter.

Schobel also had a 22-yard touchdown in the second quarter, part of 110 rushing yards in 16 carries as he and Connor both exceeded the 100-yard mark.

On the ensuing possession the Dexter defense made a stop on fourth down inside the red zone, aided by a bad snap on fourth-and-1 which moved Maranacook back from the Dexter-16 to the 29-yard line.

“This team it’s been all heart, it’s a brotherhood,” Gagnon said about Dexter fighting through the late stages of the game. He said head coach Andrew Shorey told the players not to give up when conditions get tough, both that day on the field and in life.

“Things got tough today, they sure did, but we pushed through together as a family,” Gagnon said.

“We focused so much all week studying their plays so we knew what was coming and we just couldn’t execute,” Connor said. “We weren’t wrapping up and they were breaking tackles and we couldn’t make plays. We started making tackles, they slipped up a couple of times and made a couple of mistakes and we capitalized on it.”

“I’m on top of the world right now,” Gagnon said. “This is everything I dreamed about and more, getting the game-winning touchdown. It doesn’t get any better than that.”