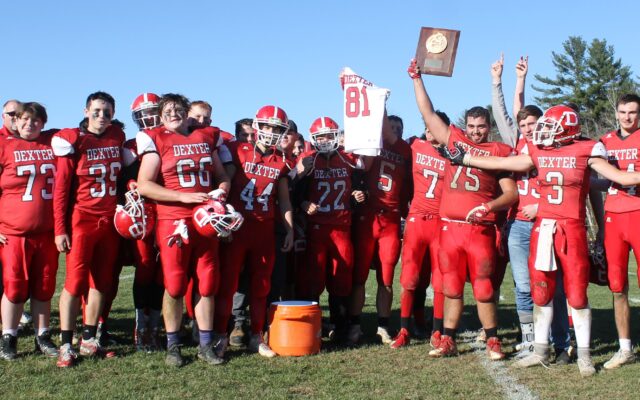 Contributed • November 7, 2021
By Ernie Clark, Bangor Daily News Staff DEXTER — Even in a high-scoring sport like 8-player football, the quest for a championship still often comes down to defense. The Dexter Tigers understand that quite well.

DEXTER — Even in a high-scoring sport like 8-player football, the quest for a championship still often comes down to defense.

The Dexter Tigers understand that quite well.

Last week they scored 60 points in a semifinal victory at Houlton, but on Saturday, Nov. 6 coach Andrew Shorey’s club yielded just a single touchdown while capturing the North region small school championship in 8-player football with a 22-6 win over Stearns-Schenck of Millinocket at Tiger Field.

“Offensively we really couldn’t block things up and we were struggling at times, but defensively we just played amazing,” Dexter junior quarterback and defensive back Bryce Connor said.

The victory sends Dexter to next Saturday’s 8-player small-school state final at Fitzpatrick Stadium in Portland. The Tigers will face South champion Maranacook of Readfield — the fifth seed in the region — which routed No. 2 Dirigo of Dixfield 50-7 in its regional final on Friday night. Kickoff is scheduled for 2:30 p.m. on Saturday, Nov. 13, following the conclusion of the large school championship between Waterville High School and Cheverus High School of Portland.

Third-seeded Dexter (6-2 which includes a 36-14 regular season win in Millinocket on Sept. 10) yielded just 164 yards of total offense with a defense that stymied No. 4 Stearns-Schenck’s passing game. Senior Cam Allen led the way with two pass interceptions and a fourth-down stop that ended a Stearns-Schenck drive at the Dexter 3-yard line.

“[Dexter] defending the pass and taking away the deep pass — something that we do a lot and have success doing — was big,” said Stearns-Schenck head coach Cody Herring, whose team managed just 67 yards through the air on 6-of-20 passing efficiency.

Dexter also generated a 55-39 advantage in offensive plays thanks to a rushing attack featuring Connor and senior Avery Gagnon that amassed 287 of the team’s 360 total yards. That came despite the Tigers being without senior fullback Nathan Schobel, sidelined with a right ankle injury after rushing for 307 yards and three touchdowns in the team’s semifinal victory a week ago.

Connor totaled 127 yards on 17 carries, including second-quarter touchdown runs of 57 and 13 yards to stake the Tigers to a 14-0 halftime lead.

Gagnon, who missed Dexter’s two previous games due to injury, returned to action and grew stronger as the game progressed, gaining 79 of his 107 rushing yards after intermission.

He also threw a 40-yard pass to junior Will Kusnierz on a fake punt play in the first quarter.

“We struggled a little bit in the first half,” Shorey said. “[Stearns] did some good stuff and we weren’t moving our feet and they’re physical up front, but we got it going a little bit and broke some big runs. We have some talented backs.”

Dexter drove 78 yards in five plays to take a 6-0 lead with 3:56 left in the first half on Connor’s improvisational longest run of the afternoon.

“It was a direct snap and I was just taking the ball and going,” Connor said. “It wasn’t blocked up right on the left so I cut back to the right and the field was wide open. It was a broken play but it worked.”

Schenck player and was recovered by sophomore Will Spratt at the Minutemen’s 30. Connor raced 13 yards through the middle of the defense to the end zone five plays later and Allen rushed for the two-point conversion for Dexter’s second touchdown within a 1-minute, 21-second span.

“The execution on special teams hurt us,” Herring said.

Stearns-Schenck (5-4) nearly got one score back before intermission after senior defensive tackle Alex Jacobs recovered a Dexter fumble at the Tigers’ 12-yard line with 27.6 seconds left, but Dexter’s defense induced four straight pass incompletions to get the ball back without yielding a yard.

“They love to pass, so we focused all week on shutting down the passing game and it worked,” Connor said.

Dexter used a four-play, 61-yard march to extend the lead on its second possession of the second half. Gagnon began the drive with a 24-yard cutback run and Connor did the rest with runs of 7 and 10 yards before he fired a 22-yard touchdown pass to junior tight end Kayden Kimball with 5:28 left in the third quarter.

Kimball added the two-point conversion run to make it 22-0.

Stearns-Schenck then earned its initial first down since midway through the opening quarter while driving from its 42 to the Dexter 12, but when Shearer found sophomore Caden Raymond wide open at 3-yard line with a fourth-and-goal pass, Allen raced over to make the tackle before Raymond could reach the end zone with 52.5 seconds left in the third.

The Minutemen finally broke through on their next possession as Shearer passed 15 yards to freshman Cameron Atkinson for the touchdown with 5:20 left in the game.

Stearns-Schenck got the ball back two plays later on a fumble recovery by sophomore defensive end Brady McAvoy, but while Shearer hit junior Jack Morris for a 26-yard gain to the Dexter 27 on the next play the Minutemen weren’t able to threaten further and eventually relinquished the ball on downs.

The regional championship is the first for Dexter since the 1989 team reached the Class C title game. More recently, Dexter played in the Class D North championship in 2016 and in 2019 when the program was still in the 11-player ranks.

History will be made on Saturday when Dexter and Maranacook play for the inaugural 8-player small school championship, as in 2019 there was only one division. The Black Bears of Maranacook will play in the program’s first football state championship at any level.

Stuart Hedstrom of the Piscataquis Observer contributed to this story.