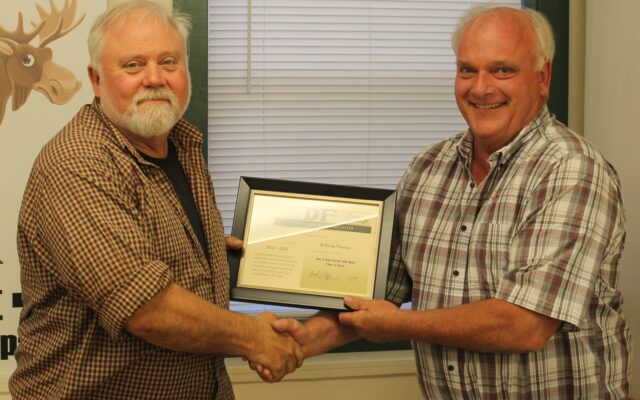 Stuart Hedstrom • June 15, 2021
DOVER-FOXCROFT — After recently replacing a ladder truck, the Dover-Foxcroft Fire Department will also be switching out a 1999 pumper truck for a new model sometime in 2022. The Select Board approved a purchase agreement during a June 14 meeting.

DOVER-FOXCROFT — After recently replacing a ladder truck, the Dover-Foxcroft Fire Department will also be switching out a 1999 pumper truck for a new model sometime in 2022. The Select Board approved a purchase agreement during a June 14 meeting.

“(Fire Chief Joe Guyott and Lt. Brian Gaudet) have been doing their homework. They got some information together from [Allegiance Fire & Rescue of Walpole, Massachusetts] and other vendors,” Town Manager Jack Clukey said.

Gaudet said that at the start of the year he, Guyotte and other members of the fire department began working with three companies to replicate the pumper truck that will be replaced. “They’re not the highest. They’re not the lowest. The reason we went with the Pierce is they can build what we are asking for and basically mimic the truck we have now,” Gaudet said, saying one company could not construct a vehicle at a size that could fit in the Dover-Foxcroft fire station.

Allegiance Fire & Rescue will manufacture a Pierce Enforcer 1500 GPM Top Mount Pumper for $702,965. If all of $682,241 is remitted to the company within 15 days of a fully executed contract and performance bonds, the balance due at delivery will be zero dollars for a savings of $20,724. Delivery is estimated to be June or July 2022.

The selectboard signed a bond anticipation note from Androscoggin Bank — the only lending institution to submit a bid — for up to $1.4 million as needed at a 1.7 percent rate through Sept. 1, 2022. The bond will be in place to assist while awaiting USDA funding for fire department apparatus, and the selectmen are scheduled to approve and issue bond documents for a USDA loan and interim financing during a special meeting set for Monday, June 28.

“This is part of the financing piece,” Clukey said. “Back in February we went to town meeting for $1.4 million for the fire apparatus.”

He said the ladder truck, the first piece of the expenditures, was delivered the week before and is now being readied for use. The second piece is the pumper truck and the third component is airpacks, and next month the town should learn if its airpack grant is successful.

Following the 128 to 13 affirmative vote — approximately 90.8 percent — at an early February special town meeting, Dover-Foxcroft officials proceeded with a plan to purchase the new ladder truck for the fire department.

The vote was for a $1.4 million U.S. Department of Agriculture loan to immediately replace the 1993 ladder truck, and start switching out a 1999 pumper truck with a new, custom model, plus purchase replacement airpacks. Of the $1.4 million, approximately $590,000 will be for the ladder truck, $690,000 for the pumper truck and $140,000 for airpacks.

The motor blew in December in the ladder truck the department has owned since 2015. Due to the age of the vehicle, a replacement motor is difficult to find and even more difficult to obtain a warranty for an extended period of time. New ladder trucks cost more than $1 million.

Gaudet began looking at dealers across the country in early December and a 2012 truck with a 100-foot ladder — which had been in service in Virginia Beach — was located at Brindlee Mountain Fire Apparatus. Guyotte, Assistant Chief Jerry Rollins and firefighter Timothy Perkins traveled to northeastern Alabama to inspect the ladder truck in person.

After some negotiating, a $590,000 price was settled on with the 2012 ladder truck to be delivered to Dover-Foxcroft. The current truck was included in the transaction by being sold for $40,000 and transported south. The newer truck comes with a three-year warranty that covers all components valued at $3,000 or more, and needed warranty work can be performed in Auburn.

Seventeen airpacks are 29 years old and are not as safety compliant as current models. The department has applied for FEMA funds but wanted to secure the extra funding in case the application is turned down.

In other business, the board accepted the resignation of member William “Ernie” Thomas, effective June 15.

In his resignation letter, Thomas said that due to taking a job abroad he will no longer be able to fulfill the responsibilities associated with the elected position. “I will add that it’s been a great privilege to serve the town of Dover-Foxcroft,” Thomas wrote. “I have enjoyed working with all involved in the running of the town; to the last they have served the town’s best interest with integrity. I believe Dover-Foxcroft is very fortunate to have so many exceptional professionals discharging the duties of town government and wish you success in all future endeavors.”

Thomas’ term was set to run through June 30, 2023, and the selectboard will look to hold a special election to fill the remaining time through the end of the 2022-23 fiscal year. No decision has been finalized, but this special election could likely be held on Tuesday, Nov. 2, in conjunction with a state ballot.

“For the past 12 months, we’ve talked about the need for a plow truck, this year we couldn’t delay it,” Clukey said.

The board received a pair of plow truck bids to replace a 2017 model, with Daigle & Houghton of Hermon submitting a low bid (by $1,045) of $190,230 for a 2022 International plow truck and gear. Daigle & Houghton estimates the chassis to be delivered in December and about 45 days will be needed for the equipment installation.

In his report, Clukey said the town has applied for federal funds to assist with the future replacement of the Lincoln Street bridge. He said Dover-Foxcroft applied for $883,225 through Congressional Directed Spending. If funding becomes available, design would be completed next year and construction would occur in 2023.

Clukey said 373 voters took part in the June 8 election, 13 percent of registered voters. This is an increase of 100 participants from the previous municipal-only election.