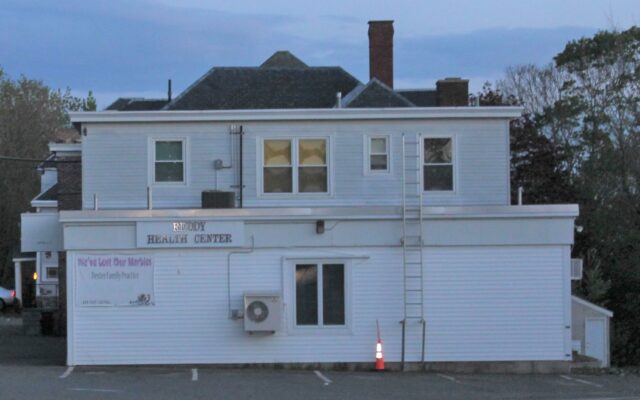 Stuart Hedstrom • May 14, 2021
DEXTER — After discussing it for months, the Dexter Town Council accepted the donation of the Reddy Building at 51 High Street, which once was Plummer Memorial Hospital, from Dr. Challa Reddy during a meeting on May 13.

DEXTER — After discussing it for months, the Dexter Town Council accepted the donation of the Reddy Building at 51 High Street, which once was Plummer Memorial Hospital, from Dr. Challa Reddy during a meeting on May 13. Short-term plans are to lease the building to Frank Spizuoco Commercial LLC and a finalized agreement should be signed in the near future.

Dr. Reddy has moved out of the building and told the town he wants to give the building to the community as a thank you for supporting him after two decades in practice. Next to the Reddy Building is Northern Light Health’s Hewitt Building, and there were some issues with easements and parking rights that needed to be resolved before property ownership can be transferred but progress has been made.

“He wants to call it the Dr. Reddy Community Center. That’s the only stipulation for now,” Town Manager Trampas King said.

Spizuoco had told town officials in the fall that programming at the Tri-County Technical Center in Dexter is growing, and uses space at the building on the Dexter Regional High School campus as well as at Millworks. He said the Reddy Building could be used to house future TCTC growth. Spizuoco also said the town would not have trouble selling the building should this decision be made down the road.

King said a lease with Spizuoco could be signed at the regular June meeting or at a special meeting before then, as councilors will hold sessions to work on the 2021-22 municipal budget.

“The easement made the most sense to me because it adds value to both properties,” Spizuoco said. “Now that it’s done it’s so much more marketable. They can drive through.”

Councilor Andrew Bermudez thanked Spizuoco saying, “If it was unoccupied it would look like many other buildings in town, so thank you for keeping it looking good.”

In other business, councilors approved an amendment to the shoreland zoning ordinance that had been tabled last month.

The amendment states all activities involving earthmoving or disturbing of soils on Big Lake Wassookeag and 300 feet north and south of the bridge on Little Lake Wassookeag shall be limited to the period between May 15 and Nov. 1.

“The reason we’re doing it is the ordinance is outdated,” King said during the March council meeting. He gave an example of foundation work on camps needing to be done only during the proposed time frame to reduce runoff in order to protect the source of town drinking water.

The full ordinance text is available at the town office, and projects within the shoreland zone still need to be reviewed by the planning board.

The council also approved a bond anticipation loan of up to $1.3 million for road/infrastructure improvements and equipment purchases.

Paving work for this summer was awarded to Roundy’s Paving of Palmyra with the company submitting the low bid for two different projects based on geographic area. Work on the Charleston Road, Park, Prospect and Oak streets and Lakeview Avenue will be done for $186,230. Roundy’s Paving other bid of $102,860 will be for McFarland Street, Skimmer Lane, Liberty, St. Francis, McClellan and Cedar streets and a portion of Water Street.

King said the work should be done in June, which is earlier than in other bids. He also said at the June meeting the council will discuss hiring an inspector for the paving project.

The council also accepted a $10,000 bid by Roundy’s Paving for paving at the Dexter Regional Airport.

A near $179,800 bid from the Bangor-based Freightliner of Maine was accepted for a Freightliner 1080SD with body and plow — the lowest of three bids. King said the vehicle should be delivered by the end of fall.

The town formally accepted several donations, including $3,500 from the Plummer Foundation for the Dexter Police Department.

“We ordered three aluminum boxes for the back of the police interceptions,” Chief Kevin Wintle said. “They’re made for fast thinking. Everything’s right there.”

He said currently the department has more heavy boxes of gear and the new models will allow for easier access during an emergency. Wintle said each box costs $1,000 and the remaining $500 will go toward the K-9 program.

Several donations were made to the Dexter Age Friendly Committee. These included $2,500 from the Plummer Foundation for raised garden beds and tablets for seniors, and $5,000 from the Maine Community Foundation.

Penobscot Lodge # 39 and Masonic Charitable Foundation of the Grand Lodge of Maine are contributing $350 apiece to the committee to aid the technology purchases for seniors.

“Our age-friendly group has started meeting again and hopefully next month we will be in Wayside Park enjoying music,” King said about summer plans. He also said there should be cruise-ins and a fly-in in the months to come.

The town manager said there will not be a Memorial Day parade on Monday, May 31, but the American Legion will conduct a ceremony at Memorial Park — time to be announced.

Town officials heard from Nancy Clifford of the Dexter Sunrise Kiwanis about the organization’s plans for welcome baskets to be given to new residents. She said a donation was made to the Kiwanis to fund this year’s items.

Clifford said her family received these when they moved while she was growing up and at one time Dexter had a welcome wagon program. Clifford said recently the Dexter Sunrise Kiwanis heard from a woman whose family bought a home in town after moving here from New Jersey and the new Dexter resident did not have much information on the community.

“We’re putting together a business service and organization directory,” Clifford said. “We’re just about done with the draft and are ready to start printing.”

She said 50-60 families have bought homes in town in the last year and another 20-25 are in the process of buying residences. Clifford said plans are for Kiwanians to visit each family with the directory, a basket of goodies donated by town businesses and a welcome letter to Dexter.

“The goal is to visit each of the homeowners with the basket of goodies with a welcome to the town and the neighborhood we’ve never had before,” Clifford said. “I’m really excited to show the town off and show how happy we are to live here.”