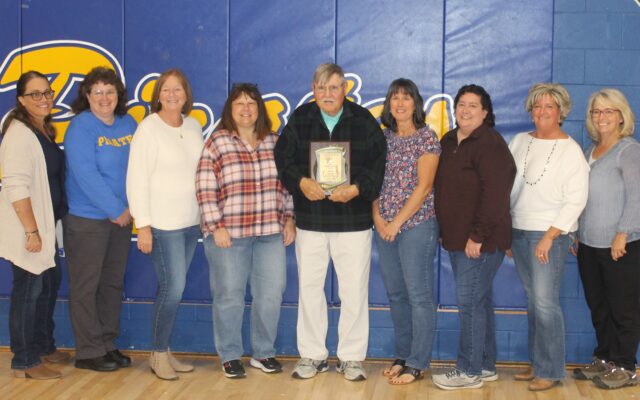 Stuart Hedstrom • October 5, 2022
GUILFORD — The sports history of Piscataquis Community High School continues to grow with the induction of five people, two teams and a contributor into the fourth class of the PCHS Athletic Hall of Fame.  The Class of 2022 was formally enshrined during an afternoon ceremony in the gymnasium on Oct.

GUILFORD — The sports history of Piscataquis Community High School continues to grow with the induction of five people, two teams and a contributor into the fourth class of the PCHS Athletic Hall of Fame.

The Class of 2022 was formally enshrined during an afternoon ceremony in the gymnasium on Oct. 1 as  part of the school’s annual homecoming festivities.

Russell’s first team in 2000-01 finished the regular season with a record of 18-0, scoring 73 points a game while only giving up 51. The team won all three games at the Bangor Auditorium by double digits en route to the Class C East championship (the Pirates fell to Boothbay Region High School in the state title game).

Nadeau is a 1983 PCHS graduate and was a three-sport star, including field hockey, which she went on to play at the University of Maine.

The 1987 softball team repeated as Class C East champions, a feat that has not been accomplished in the three and a half decades since. In the back-to-back title games, the Pirates fell to Sacopee Valley High School of Hiram.

Mike Graf, a 1983 graduate, played three seasons of varsity basketball during the early 1980s. He averaged 20 points a game to finish with 1,049 career points, while helping the Pirates go 45-9 in the three seasons.

Buddy Leavitt also reached the 1,000-point milestone, becoming the fourth Pirate to accomplish the feat. The 2001 graduate was a star player on the regional championship team his senior year.

Dennis Miles was a standout on the wrestling mat and in the thrower’s circle for the Pirates before graduating in 1965. Miles won a state championship in both wrestling and in the outdoor shot put, the only PCHS athlete to win an individual state title.

PCHS Principal John Keane said Gordon Contracting Inc. of Sangerville is being honored for the second year in a row for continual efforts giving back to the athletics program at PCHS and the larger SAD 4 community.

Keane said Gordon Contracting —  President/CEO Brian Howard is a PCHS graduate — worked on the soccer field by putting in a new drainage system and resurfacing and seeding the pitch. The company also redid the track around the field with a new paved surface being used by athletes and the community.

Teacher Trisha Moulton, a 2019 hall of fame inductee, said the late athletic director, coach and physical education/health teacher Joe Gallant had a dream to have an all-weather rubber surface on the PCHS track that would be suitable for meets. “I really want to keep Joe’s dream alive and continue his legacy,” she said.

Moulton said project costs have increased to around $150,000 from $100,000 and fundraising continues.

Keane said the names of the 2022 hall of fame inductees will be added to those of the three prior classes on a board in the lobby. He said the hall of fame committee meets annually in June to consider nominations. The final decisions are announced leading up to Homecoming.

The principal said plans are underway to create a PCHS Academic Hall of Fame.

“There’s been incredible people who have graduated from PCHS and we want to recognize them as well,” he said.