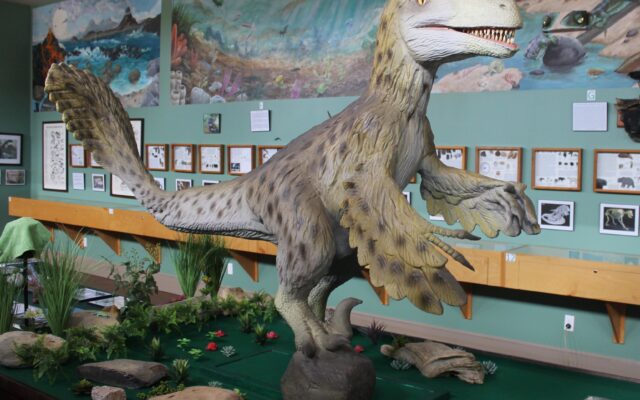 Stuart Hedstrom • May 11, 2022
MILO – When the Harrigan Learning Center and Museum reopens for the season on Sunday, May 15, visitors will be greeted by a dinosaur.  The full-sized robotic creature joins the collection of fossils, artifacts, gems and minerals, and much more accumulated by center namesake and director Tom Harrigan and now shared at the museum on Harris Pond Road.

MILO – When the Harrigan Learning Center and Museum reopens for the season on Sunday, May 15, visitors will be greeted by a dinosaur.

The full-sized robotic creature joins the collection of fossils, artifacts, gems and minerals, and much more accumulated by center namesake and director Tom Harrigan and now shared at the museum on Harris Pond Road.

The dinosaur is a deinonychus, Latin for “terrible claw,” which refers to the large sickle claw on the second toe of both feet. To find a name that rolls off the tongue more easily, the Harrigan Learning Center and Museum is holding a naming contest.

With the robotic figure moving and roaring in the background during a recent weekday, Harrigan said the addition “makes it a little nicer, a little more interesting and maybe will attract more people.”

Harrigan said he saw science author Don Lessem on “Shark Tank,” in which he won $500,000 from Mark Cuban for his business. Lessem is the CEO and founder of Dino Don, Inc., an animatronics company specializing in dinosaurs, dragons and sea creatures for museums and other displays.

He contacted Lessem and since then the two have become friends.

Harrigan ordered a dinosaur for the museum and is awaiting an accompanying collection of eggs which, like the deinonychus, is manufactured in China and will need to be shipped to the U.S.

“I picked it out of a catalog,” Harrigan said. “The reason I picked this one is because we don’t really have room for a bigger one and this one cost enough as it was.”

The deinonychus is a genus of theropod and a flightless species having many bird-like characteristics. It lived in the early Cretaceous Period from 115 million to 108 million years ago.

The contest is open to all ages. Entrants can visit the museum to experience the deinonychus for inspiration, then mail in their entry forms. Applicants can enter three times on separate forms.

First prize is a miniature T-Rex skeleton fossil replica, with a stand, scientist brush and gloves. First runner-up will receive a figure of a velociraptor breaking out of its egg, and the second runner-up prize is a walking T-Rex figure.

“Right here is going to be a big nest of eggs, 22 eggs,” he said. “They include eggs that other dinosaurs laid in this guy’s nest. Birds do that too and not only that they are going to be colored eggs blue with brown spots and splotches. I want to be able to tell people how birds got the colored eggs. They got them from the dinosaurs that made their nests above ground.”

Several members of the Three Rivers Kiwanis have so far sewn 48 dinosaur pillowcases which will be for sale at the museum for $10, as well as the upcoming Black Fly Festival and Maine Whoopie Pie Festival. The museum will also sell dinosaur figures and replica eggs.

The robotic dinosaur joins artifacts including bones, pieces of eggshells, dinosaur footprints in red sandstone from the Connecticut Valley, and coprolites or fossilized dung. Harrigan said museum staff have some younger visitors close their eyes and hold out their hand, then guess what they are holding.

Responses are often rocks or bones, but then Harrigan tells the children they are in fact holding “dinosaur poop.”

“The kids like this, it’s a T-Rex tooth,” said museum Assistant Director Lydia Richard, showing one of hundreds of items in the glass display cases lining the walls. In one corner is a baby T-Rex skull, named “Tony.”

Harrigan said “dinosaur hunting licenses” are available for children to fill out as they learn and think about the numerous species that used to walk the Earth.

The museum is one of several buildings Harrigan and his wife Nancy designed and hired Milo resident and business owner Ron Desmarais to build for them on 2.1 acres of business park land given by the town of Milo.

The Harrigan Learning Center and Museum is open 10 a.m. to 4 p.m. Wednesday and Saturday and 1-4 p.m. Sunday, or by appointment, May 15 to Oct. 15. For more see the museum page on Facebook.