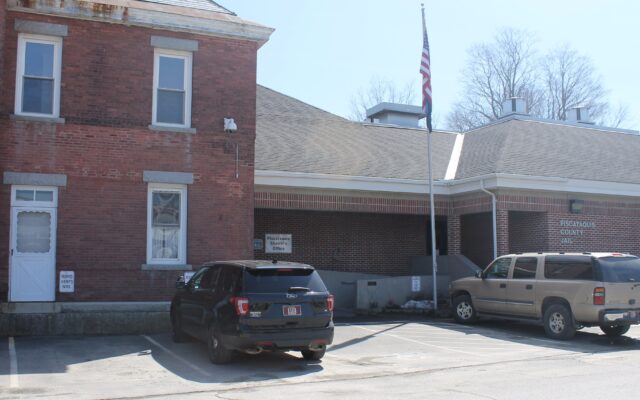 Valerie Royzman • April 6, 2022
DOVER-FOXCROFT — Piscataquis County’s dispatch center will have a new home in early 2023, but it won’t be the one that county officials have discussed for months as part of an overhaul meant to fix chronic radio communications problems for emergency personnel.  The dispatch center will be relocated from cramped conditions inside the Piscataquis County Jail to the administrative unit of the sheriff’s office on the first floor, Sheriff Robert Young said.

DOVER-FOXCROFT — Piscataquis County’s dispatch center will have a new home in early 2023, but it won’t be the one that county officials have discussed for months as part of an overhaul meant to fix chronic radio communications problems for emergency personnel.

The dispatch center will be relocated from cramped conditions inside the Piscataquis County Jail to the administrative unit of the sheriff’s office on the first floor, Sheriff Robert Young said. The facilities are located in the same building.

County officials had planned to move the dispatch center from the control room at the correctional facility in Dover-Foxcroft into the patrol and investigation divisions building in downtown Guilford. Financially and logistically, the sheriff’s office was determined to be a better home for dispatch, Young said.

Piscataquis County Commissioners approved an architect for the dispatch relocation during a meeting on Tuesday. The move is part of a major project to upgrade radio communications for fire and police departments struggling with outdated infrastructure and hilly and mountainous terrain. The overhaul is estimated to cost $5 million for the first phase, not including the dispatch center. Commissioners pledged to use American Rescue Plan Act funds for the project in recent months.

Officials hope to have the dispatch center relocated by Jan. 1, 2023, Young said.

Vicki Leavitt, based in Old Town, will serve as the architect on the dispatch project. The Piscataquis County Emergency Management Agency and sheriff’s office had already been consulting with Leavitt to understand what the project would entail.

Leavitt looked at three options for the dispatch center’s new location, including the basement of the Peaks House, which houses county offices and commissioners chambers; the basement of the University of Maine Cooperative Extension building; and the first floor of the sheriff’s office, Young said.

The architect recommended refurbishing the first floor of the sheriff’s office to meet the needs of administrative employees and dispatchers.

The dispatch center is too small for current and future operations, and office space is shared with corrections staff, according to a presentation from Communications Design Consulting Group of Barrington, New Hampshire. County commissioners paid the engineering consultant $27,000 for a feasibility study on radio communications.

The current dispatch set-up is inadequate for proper layout of the dispatch console equipment, the presentation from November 2021 said.

The new total cost of the project is unclear, but the newly chosen location comes with advantages, Young said. By moving the dispatch center to a space in the sheriff’s office, where cable is already in place, a tower would not need to be built, he said. The new tower was estimated to cost more than $100,000, he said.

“We expect that relocating dispatch within this building will be significantly cheaper than moving it entirely,” Young said. “However, this is a very old building, and our current [administration] section was once the sheriff’s residence. Refurbishing has challenges as well.”

Leavitt is working on several design proposals, and once ideas are fleshed out, officials will have a better idea of the cost, Young said. She visited the sheriff’s office and took measurements on Monday, he told commissioners.

The conference room could remain intact, but elements such as a low ceiling and the staircase are more challenging to work with, he said.