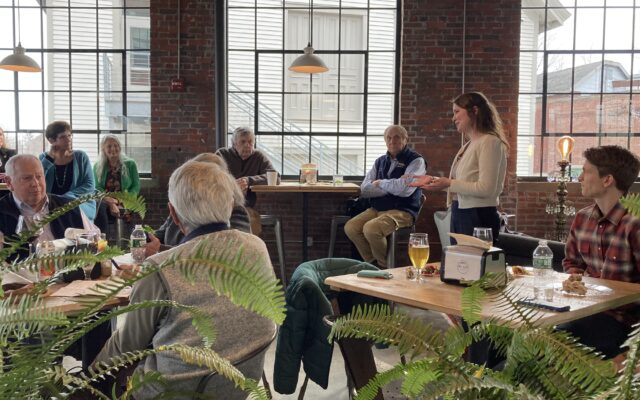 Commissioners said no to funding, but Piscataquis County will move ahead with broadband anyway

Valerie Royzman • March 29, 2022
Piscataquis County will soon have a point person to organize community efforts and serve as a guide to municipalities on broadband expansion. As part of the Maine Broadband Coalition’s new Community of Practice program, leaders across the state working to advance broadband — including John Shea, Piscataquis County Economic Development Council executive director — joined a cohort to share learning and resources.

Piscataquis County will soon have a point person to organize community efforts and serve as a guide to municipalities on broadband expansion.

This is a major step for broadband in Piscataquis, where internet is spotty in rural parts of the county. In recent months, the economic development group pursued a broadband study that identified gaps and how to fill them, which is serving as the groundwork for municipalities. In February, Piscataquis County Commissioners rejected a request for funding that would have allowed the economic development council and a consulting firm to proceed with broadband education and grant projects.

Although Shea is leaving in April to lead a nonprofit in Kansas, the new executive director will work closely with a volunteer called a connectivity booster, who will be given a stipend through the Community of Practice program. This person can answer questions, organize meetings, collect data and work with municipalities to find broadband expansion solutions that fit communities’ needs.

Most Piscataquis County municipalities have been approached by service providers since the study completed in December 2021 was released, Shea said. Town leaders have contacted him about the wisest ways to move forward and spend their American Rescue Plan Act funds, he said.

Shea recently heard from a group of six or so towns that are looking to collaborate with a vendor to grow broadband in their area, he said.

Although the Piscataquis County Economic Development Council does not have Brian Lippold of Casco Bay Advisors — the consulting firm that completed the broadband study — under contract, he is working with some communities and Shea has recommended him as a resource, he said.

The ConnectMaine Authority, the state’s broadband agency, provided the funding for the Community of Practice program, which will allow small towns with limited resources to work with a point person to get broadband efforts underway, said Clara McCool, regional broadband associate for the Greater Portland Council of Governments.

McCool spoke about the program during a Piscataquis County Economic Development Council meeting on Monday. She is co-chairing the program and efforts to find counties and regions a connectivity booster with Christa Thorpe of the Rockland-based Island Institute.

The connectivity booster will likely be chosen in the next month or two, McCool said. Ideally, the person would be someone already engaged with broadband efforts and geographically located in the area they’ll serve, she said.

As part of the Community of Practice program, the Maine Broadband Coalition helps the connectivity booster get ready for their role, including base education about the technology they’ll need, she said.

“With Piscataquis, where they’ve done this inventory and gap analysis, I think there are a lot of towns that have questions on what to do once they’ve figured out there’s a lack of broadband,” she said. “It’s like, what now? Hopefully the connectivity booster will be someone these towns can go to and someone they can trust.”

The connectivity booster will serve as an assistant to the Community of Practice leader for Piscataquis County. This person will be an educator, organizer and administrator, said Sam Naumann, grassroots advocacy coordinator for Maine Broadband Coalition.

For example, the connectivity booster would educate municipalities on funding, technology that makes sense in their area and next steps, he said. This volunteer might organize regional discussions that could lead to collaboration. They might also set up meetings and record minutes or help write grant applications, he said.

Naumann called Piscataquis County’s recent broadband study “game-changing.” The groundwork is critical to answering technical questions that the county and municipalities need answered before approaching a private provider about how to get to the finish line with broadband expansion, he said.

At Monday’s meeting, Shea also highlighted the economic group’s economic development strategy, which is finally making progress after a significant delay of federal funds, he said. The University of Maine’s Margaret Chase Smith Policy Center will serve as the consulting firm, he said.

“The process will basically start with the formation of a very broad and diverse stakeholder committee to lead the project, perhaps 25 or 30 people,” he said. “It’ll be businesses, municipal leaders, elected officials, NGOs [non-governmental organizations], other stakeholders and engaged citizens and of course partners like EMDC [Eastern Maine Development Corp.].”

The Piscataquis County Economic Development Council is looking for its next executive director. The opening was posted online earlier this week.