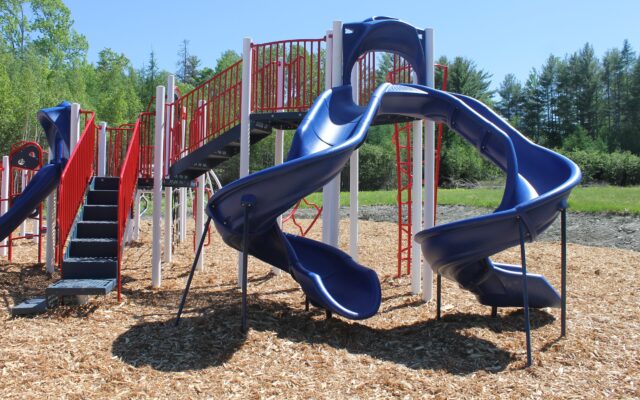 Stuart Hedstrom • November 5, 2021
MILO — Efforts to continue adding to the Penquis Valley Community Playground have received a boost with the awarding of a $6,906 grant from the Gloria C. MacKenzie Foundation grant, which will go toward the purchase of a swingset.

MILO — Efforts to continue adding to the Penquis Valley Community Playground have received a boost with the awarding of a $6,906 grant from the Gloria C. MacKenzie Foundation grant, which will go toward the purchase of a swingset. The SAD 41 school board formally accepted the grant during a meeting at the Penquis Valley School on Nov. 3.

Through its mission and vision, the East Millinocket-based Gloria C. MacKenzie Foundation hopes to improve economic growth and enhance the quality of life for the people of Maine. Two years ago the foundation gave SAD 41 a $200,000 grant to cover a portion of a $2.4 million funding package to upgrade the heating system at Penquis Valley.

The playground, all in red, white and blue school colors. opened in late May in a space behind the school that had little to offer younger middle school students during recess. Previously, the younger students at Penquis Valley Middle School had just a decades-old basketball court and a small area with a pile of dirt and two roads going by it to use for recess. Penquis Valley Middle School grades 5-6 social studies teacher Debbie Page and others saw the need and work began to change this with a new age-suitable playground.

SAD 41 fifth-graders moved to Penquis Valley several years ago, a few years after grade 6 students came over from the Milo and Brownville elementary schools.

Page told the school board that additions are planned as part of the next phases for the area beyond the equipment installed earlier in the year. She said these include finishing a basketball court and installing a soccer/kickball field.

The field can be used during recess as well as for Railroaders practices. The current practice area, located next to the Sebec River and down a steep incline, has drainage issues.

Page said a zipline and swingset were ordered in early June, but due to labor problems and supply issues the order arrival was delayed until early November.

“We have had local contractors donate time and materials,” Page said. “The community has generously supported all of our efforts.”

“It’s very nice to have a place up there to have fun,” board member Chris Hamlin. She thanked Page and Hamlin said she recently brought her grandchild to the Penquis Valley Community Playground.

In other business, the board learned more about what health and safety procedures may be in place for the upcoming basketball seasons.

Superintendent Michael Wright said this will be a topic at an upcoming meeting of the region’s administrators.

“We are trying to see if we can come to some sort of agreement on general guidelines for winter sports,” he said. “This year we have the challenge of people coming into the building, who’s masking and who isn’t.”

In 2020-21 the Walter “Eddie” Oakes Gymnasium was closed to spectators as the Patriot and Railroader teams took to the court and cheered from the sideline.

Wright said options include having only home fans in the gym and having 50 or 75 percent capacity.

“We are going to try to nail some of that down to have some consistency,” he said.

Penquis Valley School Athletic Director Jason Mills said he and his colleagues across the region have been having similar discussions.

“I would be ideal if everyone was on the same page, but that’s not going to happen,” Mills said about differences in school by school policies. He said this will include concessions, will food and drink be permitted in the gym or not or not and how would spectators be reminded to put their masks back on when finished.

“Games will be streamed again this year,” the athletic director said. Penquis games will be available through the National Federation of State High School Associations and away contests may be through other services through the home school.

Mills said middle school tryouts began earlier in the week, and players have been wearing masks.