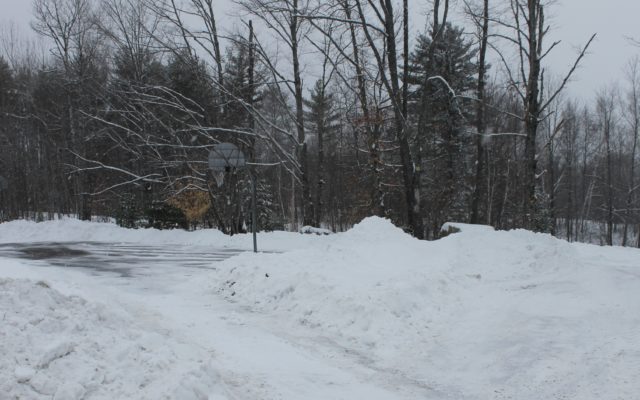 Stuart Hedstrom • February 20, 2020
Currently the younger students at Penquis Valley Middle School have little more than a decades-old basketball court and a small area with a pile of dirt and two roads going right by to use for recess but a group of educators, parents and community members are working to change this with a new playground.

MILO — Currently the younger students at Penquis Valley Middle School have little more than a decades-old basketball court and a small area with a pile of dirt and two roads going right by to use for recess but a group of educators, parents and community members are working to change this with a new playground.

Sitting in her classroom several days before the start of February vacation, grade 5-6 social studies teacher Debbie Page explained several years ago SAD 41 fifth-graders moved up to Penquis Valley, a few years after grade 6 students moved over from the Milo and Brownville elementary schools.

“There’s nothing, there’s just a piece of land with a road on two sides of it and a very dilapidated ball court, I think it’s been there for at least 40 years,” Page said, with an access road to D’Este Street and Penquis Drive each running by.

Observer photo/Stuart Hedstrom
PENQUIS VALLEY PLAYGROUND — A committee of teachers, parents and community members is currently working to put in a playground behind the Penquis Valley School in Milo. The recreation area would serve the younger middle school pupils during recess and the larger SAD 41 community.

Cheana Bavelaar, who has three daughters under age 10 including two in grade school, said the current recess space is inadequate and unsafe. “I’m part of a program that comes and cleans students’ teeth at school and I was talking with a fifth-grader and I said ‘so what do you do at recess’ and the kid said ‘oh we sit on the hill and talk’ and my heart just sank,” she said. “I thought my kid will be here in two years, her and her friends I can’t imagine them just not going outside and playing, just sitting there with the energy that these kids have and the imagination that these kids have. It just broke my heart so I caught a teacher out here after soccer practice and I mentioned it to her.”

Bavelaar learned in 2018 a committee formed to create a playground on campus and soon she was in contact with Page. “Two days later Debbie called me and it was just like that, and that was in September and three months later we’ve done so much already,” Bavelaar said.

Page said the group was comprised of teachers but with parents getting involved, they became reenergized.“We knew we needed to bring the community in to really make it happen,” she said.

The group can be found on Facebook under “Penquis Valley Community Playground,” and the page statement reads “We believe that every school deserves a safe playground. Children need time for free play at recess. Research shows that it builds social skills, confidence and coordination. We also promote healthy initiatives for students, and the SAD 41 community.”

Earlier in her career Page taught third grade for 14 years. “I pushed recess so much I was taking my kids out three times a day, it made such a difference for the kids that they had that break in-between having to sit and learn and study,” she said. “There’s so much research that tells that kids’ brains get reenergized and focused having that time to play outside and talk with their friends and laugh and be creative so we need this so badly.”

“We are going to start with our main piece and that will have climbing structures on it and little bridges,” Page said, as what is installed depends on how much funds are raised.

“A jungle gym type thing at the end I think it has a slide on one side, it’s a whole system,” Bavelaar added.

“Following that, the swingset is a separate structure and it’s going to be handicapped-accessible and we also have planned this special swing where kids can swing together,” Page said.

“Or a parent with a child so you can both swing instead of pushing them for an hour cause that’s all they want to do is swing,” Bavelaar said.

“There’s a net system that the kids can climb up, a 100-foot zipline and then this really new piece it’s called a ninja course,” Page said. “It’s basically a fitness course for teenagers, adults, even younger kids can use it but it’s geared toward the middle and older end of the spectrum. We’re going to have a picnic pavilion where families can come up, benches, there’s going to be a field that’s going to be dry instead of the soccer field.”

Bavelaar said it is not uncommon for practices on the field adjacent to the Sebec River to be cancelled as a result of the soggy conditions. Two and a half decades ago the site of the future playground was cleared by the United State Army Corps of Engineers, “So we’re hoping we can put the soccer field up there so the kids can play soccer, kick ball.

“So then when kids are at practice parents who are waiting with little ones, the siblings can be playing at the playground at the same time

Page said the plan is to have a walking trail around the playground and a nature trail — the total parcel is around two acres. “So parents can get their steps in, grandparents,” she said. “Milo doesn’t have anything for the people to get them outside, there’s nothing.”

“When you think about it, any school that’s thriving has a playground, has a place for people to go,” Bavelaar said. “I think adding this component will be huge for the kids and the community here.”

“We have a contract and it’s $205,000,” Page said with the company GameTime. “We have split it among the different pieces so we have the main piece (with an approximate $96,000 cost) and we’re targeting different grants with different parts of the playground. We’re hoping for success and we’ve got some great grant writers who are working with us.”

Funding is being sought from sources such as the Libra Foundation and Maine Community Foundation. Page said the playground committee should learn in the spring if the grant applications are approved.

“We’re doing the grants and we’re really hopeful but at the same time we’re working hard,” Bavelaar said. “We have done multiple fundraisers already, we did a fundraiser out to Wildwoods (in Brownville). They were so kind out there to us and we had success with the lunch with Santa. We had hat days. Milo Elementary has done a dress down day for the teachers. Our February raffle has been very successful, we’ve done a paint and sip so we’re working really hard and we have lots of future fundraisers. We plan to do a chili cookoff, a semiformal for the kids, the popcorn sale is this week, a kickball tournament in the summer, golf tournaments.

“So we have lots of ideas to raise money because our biggest thing is that we are not asking for a handout. We don’t expect anyone to just say ‘here’s all the money you need.’ I also want all these kids to learn in order to get something, you have to work for it, that’s the only way you’re going to get anything. I want these kids to see once the playground’s there, once everything’s there, once the community sees it there, they say ‘wow it’s made a difference.’”

“So many businesses, so many people have said ‘let us know when you want to do something,’” Bavelaar said “They are so willing to help.”

Nearly $8,000 has been raised so far and this amount is expected to increase to $10,000 by the end of the school year. “We’re hoping this summer to have some of it installed so kids coming in next year will have a place to play up there,” Bavelaar said.

“We’re really fortunate the school is allowing us to take over that space,” she added in thanking the SAD 41 school board.

For more information on the project, please visit the Facebook page which includes information on the upcoming events such as committee meetings and current fundraisers. Bavelaar and Page can also be contacted at 207-943-3903 and 207-943-2850 respectively.