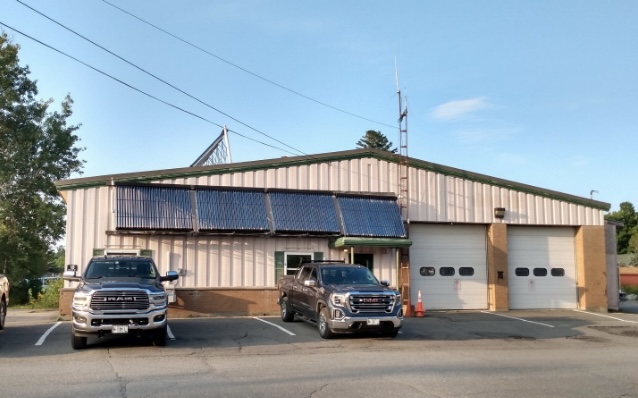 Stuart Hedstrom • September 8, 2022
GREENVILLE — Sheridan Construction Corp. of Fairfield has been selected as the contractor for the new Greenville Public Safety building.

GREENVILLE — Sheridan Construction Corp. of Fairfield has been selected as the contractor for the new Greenville Public Safety building.

The firm was recommended from a pair of bids examined by the public safety building committee and the selectboard approved a motion to proceed with Sheridan Construction during a meeting on Sept. 7.

Residents approved up to $5,150,000 in bonds at the annual town meeting in June to finance surveys, demolition, construction and related expenditures for the structure. The bond is expected to be issued in May 2023, with plans to repay it over the course of 15 years, according to the warrant article.

The building will house the fire and police departments to help with current outdated spaces and building code violations. It will be built at the site of the fire station on Minden Street across from the town office.

John Contreni of the public safety building committee said the select board formed the group in June 2021. Since then, the 11 members have met about a dozen times and reviewed bid specifications from Sheridan Construction and Bowman Constructors of Newport during recent sessions.

Contrenti said Sheridan Construction stood out for a multitude of reasons.

“First of all it was the quality and presentation,” he said. Contreni said the firm indicated a willingness to work with the town and stay within budget. And Sheriden would return 100 percent of cost savings to the town.

Sheridan Construction would have a project manager on scene even with subcontractors working on the project, Contreni said.

He said Sheridan Construction had a bid of $27,070 as a maximum price for the design, geographical work, and topographical survey, whereas Bowman Constructors’ estimate was several times more expensive.

Fire Chief Sawyer Murray said department vehicles would be covered from the elements before winter during construction. He said moving and storing gear will be a logistical nightmare, but it can be done.

Murray said others who have worked with Sheridan Construction spoke highly of the firm, including Foxcroft Academy with its newly opened Jim Robinson Field House.

Selectboard Chairperson Geno Murray thanked the public safety committee for its work, and said tours of the facility helped with the affirmative town meeting vote.

The new building would cut energy costs, and better meet the needs of the departments and a community that has grown, leading to increased calls for service. Murray previously listed a number of issues with the current 6,400-square-foot building, including one bathroom for all firefighters and no showers, lack of storage space, no hot water and floor drains that back up and sometimes freeze in the winter, leaving standing water on the floor.

Roy had said the structure is Greenville’s largest energy consumer. Other issues are poor lighting, outdated rooms and snow damage to the exterior. Firefighters’ jackets and boots are stored behind fire trucks, so gear is exposed to diesel exhaust when the vehicles are operating.

The police department, housed inside the town office, is struggling with a cramped space that doesn’t allow easy access to records and evidence for cases. Records are stored in a vault at the fire station.

The bond is expected to be issued in May 2023, with plans to repay it over the course of 15 years, according to the approved warrant article.

In other business, the board approved a $49,757 bid from Maine Highlands Contracting of Beaver Cove for masonry work at the Shaw Public Library, including on the brick exterior and front steps.

Maine Highlands Contracting was the lower of two bids by more than $15,000, but the price tag is still more than the $44,000 the town had budgeted. Roy said funds from other accounts could be used to make up the difference with the work to take place in the spring.

Chief Murray updated the board on a number of fire department items.

He said he has spoken to many classes at the Greenville Consolidated School on fire prevention, brought a fire truck to campus and firefighters have eaten lunch with students and gone outside for recess with them.

“It was little but large in the grand scheme of things,” Murray said.

The chief said he has spoken with the Rockwood Fire Department about coverage with all of the Moosehead Lake water being in Greenville’s area, but much of the western shore being in Somerset County.

“Even if we get on the road and get turned around it’s better than to need it but not have it,” he said.

Murray said the week before a structure on a lake island caught fire and the Maine Warden Service needed to shuttle firefighters from the mainland.

“It’s going to be work in progress to get a boat,” Murray said as grants and fundraising could help provide for this vehicle in the future. He said the boat could at times provide quicker transportation to wildfires compared to road travel.

Roy said the town would look at a public safety boat to be used by the fire and police departments. He said the boat would be on a trailer “to serve all the surrounding lakes and ponds.”

Murray said Greenville is no different from many other departments with its lack of firefighters —  currently there are about two dozen members with half being very active. He said coverage is especially difficult in the middle of the week, and there are no easy answers.

Greenville’s call volume has increased in the last half decade, Murray said. He said 65 annual calls were handled by the existing manpower without difficulty, but the number of calls this year already total 146.