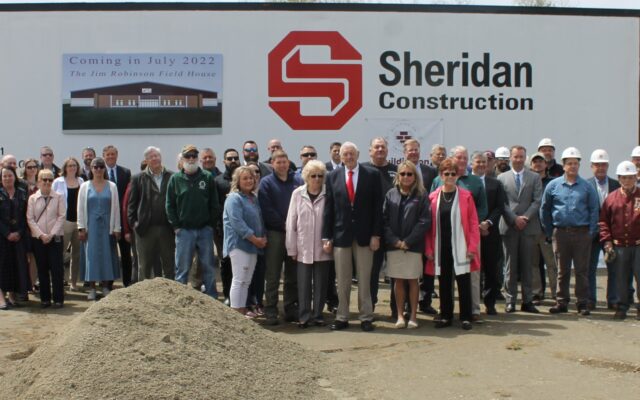 Stuart Hedstrom • May 5, 2021
DOVER-FOXCROFT — A legacy of improvements at Foxcroft Academy to benefit students and the community is continuing with the construction of the Jim Robinson Field House. Work is underway on the site on the western edge of campus and a formal groundbreaking ceremony took place on the afternoon of May 3.

DOVER-FOXCROFT — A legacy of improvements at Foxcroft Academy to benefit students and the community is continuing with the construction of the Jim Robinson Field House. Work is underway on the site on the western edge of campus and a formal groundbreaking ceremony took place on the afternoon of May 3.

“We celebrate another beginning in our ‘Building on Tradition’ capital campaign with a special groundbreaking event of the Jim Robinson Field House here at Foxcroft Academy,” Foxcroft Academy Chief Communications Officer Toby Nelson told those gathered by the track as the sounds of heavy machinery working on the soil of the former soccer field adjacent to Oakes Field could be heard.

Nelson said the campaign is the first for the secondary school in about two decades and the field house has been several years in the making. “With the help of several major benefactors, many gifts from supportive alumni and friends and the work of many people behind the scenes, this project is finally coming to fruition,” he said.

The Jim Robinson Field House — A.E. Robinson Oil Company owner Jim Robinson who is a 1959 graduate of Foxcroft Academy secured the naming rights for the $5.5 million building — will be utilized by future Pony athletic teams and “will be a building our community will use and be proud of for years to come,” Nelson said.

Nelson said since the school building opened on West Main Street in 1952 there have been several significant campus improvements, including new athletic fields shortly after the turn of the century and the addition of two dorms since.

Shorey said the Building on Tradition campaign has been a year-three endeavor, surviving the coronavirus pandemic, and “it was started with a desire to create necessary space to support Foxcroft Academy athletics.”

Originally an expansion to the gymnasium was eyed to support wrestling, cheering and indoor track. “The impetus of transformation from a gym addition to the field house started with meeting and developing a relationship with the Libra Foundation, who gave the lead ($2 million of $5.5 million) gift that launched Building on Tradition,” the head of school said.

“The Libra Foundation has accomplished incredible things in Piscataquis County, revitalizing downtown Monson, building and supporting the Piscataquis County Ice Arena and supporting this 81,000-square foot facility,” Shorey said. He said the foundation had no desire for the field house to be named after the organization, just that the space have artificial turf and be shared with the community

“We are forever grateful,” Shorey said.

“This facility will support the originally intended activities and house a regulation-size field hockey/soccer field, an indoor practice track supporting baseball and softball, community wellness activities and much more,” he said.

Libra Foundation Chairman/CEO Craig Denekas said the foundation has been pleased to work with Foxcroft Academy on both projects. “A facility like you are building here is so much more than a place to play field hockey or soccer or whatever it may be, it really is something that adds such a dimension to the community and helps people want to stay, want to have kids here, want to move here,” he said.

“We had a very active student body doing tons of stuff, trying to do all of that in a basketball gymnasium designed in 1961. It just didn’t work, it was impossible to schedule activities there,” Foxcroft Academy trustee and field house planning committee Chairman Tom Lizotte said.

He said possible solutions were examined, a capital campaign was developed in 2016 and then the priority of a multiple-use fieldhouse with a large enclosed space for numerous activities to be open to the community was developed.

A design committee was formed in 2017 and CCS Fundraising Consultants was chosen for a feasibility study. “The feasibility study provided a level of confidence that the board of trustees needed to begin this process,” Lizotte said. “Of course our confidence level also jumped into the stratosphere thanks to the Libra Foundation.”

Lizotte said the trustees committed to the project unanimously and each board member has donated to the effort.

He said a rule of fundraising is “donors only give to projects they believe in and where the need and benefit is clear” and praised Shorey and Director of Major Gifts Peter Ingraham for explaining the vision for the field house.

“It is clear to me that the more than 200 donors who have given to this project believe in Foxcroft Academy, our students and in the leadership provided by our head of school,” Lizotte said.

He said Foxcroft will be celebrating its bicentennial in 2023, “and we can also say with total confidence that our future is bright and full of promise.”

Shorey thanked the trustees and said the 19-member board rose to the challenge and has donated 28 percent of project funds to date.

Trustee Dr. Richard Swett said the community was asked what they would like to see. “An all-weather, multipurpose field house was the most popular choice. Several years later and with more than 200 generous donors, that is what we are building”

“The field house will benefit not only Foxcroft Academy students but also students from the surrounding communities and citizens of all ages,” Dr. Swett said. “We also believe it will stimulate economic development, drawing people from other areas for tournaments and sports camps and other events and these people will utilize our local businesses and lodging facilities.”

Shorey said Sheridan Construction Corporation of Fairfield is the general contractor and five local businesses will play a significant role in the construction. The Jim Robinson Field House will have one of the largest solar panel setups in the state on the roof.

“We still need to work to raise funds until the ribbon-cutting ceremony in August of 2022,” Shorey said, citing the spike in construction costs during the pandemic. He said the ceremony planned for next year’s Alumni Weekend will celebrate the various named portions of the field house and serve as the start of the Foxcroft Academy Bicentennial celebration.