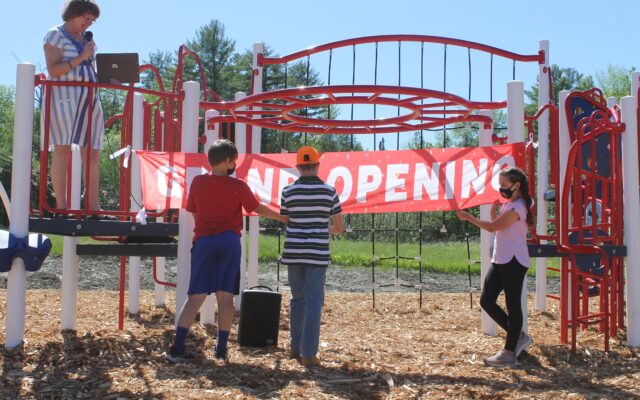 Stuart Hedstrom • May 28, 2021
MILO — A space behind the Penquis Valley School that previously had little to offer younger middle school students during recess now has a brand new playground. The Penquis Valley Community Playground was formally opened with a ribbon cutting at the end of the school day on May 27.

MILO — A space behind the Penquis Valley School that previously had little to offer younger middle school students during recess now has a brand new playground. The Penquis Valley Community Playground was formally opened with a ribbon cutting at the end of the school day on May 27.

Penquis Valley Middle School grades 5-6 social studies teacher Debbie Page, standing on a playground platform with microphone in hand, thanked the students, staff and community for coming to see the grand opening of the playground featuring equipment all in red, white and blue school colors.

“We’re so thankful to so many of you. You have been with us every step of the way so that this day would finally come,” Page said. “What you see here is a culmination of much hard work and generosity. We have raised, to date, $138,000,” she said to the first of many rounds of applause.

Page said some people may wonder why fundraising is still going on, and the reason is there is more to come at the site. “Well this is our phase one. Our phase two goal is a zipline, a swingset, repaving the basketball court and then a picnic pavilion and we won’t stop there,” she said. “Phase three you are going to look out back here, that’s going to be your new soccer field.”

The grand opening was to thank everyone who played a role in making the Penquis Valley Community Playground a reality. Page asked Tony and Cheana Bavelaar — the parents of three daughters including two in grade school — to come forward.

“They came to me in September 2019.They heard that I really cared about doing this project and they asked if they could help make this happen,” Page said. She said the Bavelaars led the way on many fronts, and Tony has been a key supervisor for project planning and construction.

Previously, the younger students at Penquis Valley Middle School had little more than a decades-old basketball court and a small area with a pile of dirt and two roads going by it to use for recess. Page and others saw the need and work began to change this with a new age-suitable playground.

SAD 41 fifth-graders moved to Penquis Valley several years ago, a few years after grade 6 students moved over from the Milo and Brownville elementary schools.

“COVID struck just when we were gearing up for several major fundraisers. We did not believe that we would be able to achieve our goals at that point,” Page said. “We were very discouraged but then I received a telephone call from a very special grandmother in our community.”

Page said this resident was excited about the prospect of her grandchildren having a school playground. “She wrote me a check for $50,000, that was her life savings. Her only request was to keep her name anonymous,” Page said. “It was this donation that helped us realize our dream would become a reality.”

“We couldn’t have done a project like this without a good, solid committee,”  Page said next as she called committee members forward to be recognized.

Page also thanked administrators of the school and SAD 41. “Thank you truly for all of your support you have given us along the way and given us your approval and encouragement for this playground,” she said.

Earlier this year a $28,734 donation from the Bill and Joan Alfond Foundation completed the first phase fundraising goal of the Penquis Valley Community Playground.

Page said Milo resident Paul Bradeen, who managed the Dexter Shoe Company factory in town, was instrumental in communicating the school’s needs to the Alfond Family. “He worked with me to tweak what our needs are and he presented it to the foundation and lo and behold we were able to finish up our phase one of this playground.”

She then recognized other businesses and organizations contributing to the playground. “Students notice all of the names I am calling, these are people who worked very hard either with their time or their money for you,” she said.

“This next group of people is the workers and boy did they work,” Page said, in calling more attendees forward to be acknowledged. “They dug the holes, they had to position the equipment and then cement had to be poured to secure everything.”

“We wish to thank all community members who donated by offering raffle items, large and small amounts of money, it’s all added up,” Page said. She then called the students who sold the most raffle tickets to come up and cut the ceremonial ribbon to open the Penquis Valley Community Playground.