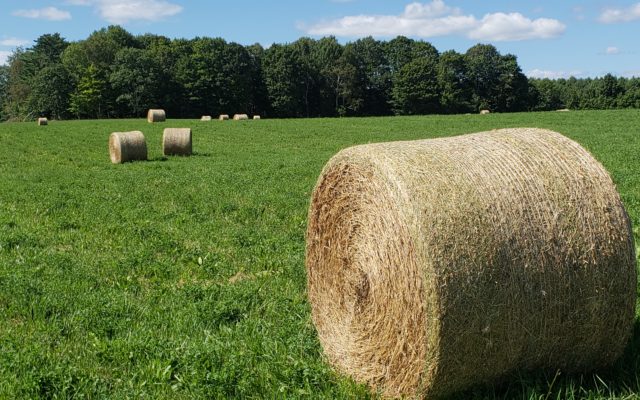 Ernie Clark, Bangor Daily News Staff • August 22, 2020
Despite recent rainfall, most of Maine is experiencing varying degrees of drought, and it’s left the state’s hay crop largely low and dry.   “We had some very nice hay weather in June.

Despite recent rainfall, most of Maine is experiencing varying degrees of drought, and it’s left the state’s hay crop largely low and dry.

“We had some very nice hay weather in June. We were fortunate in this area to get some showers that other people didn’t get,” said Barry Higgins, the owner of Maple Lane Farms in Charleston. “Then we went three weeks from the 22nd of June to July 13 before we ever baled another bale of hay. We never got a lot of water, and it got very dry.”

Both Higgins and Rick Kersbergen, a sustainable dairy and forage systems expert with the University of Maine Cooperative Extension, estimate that the state could end the year more than 30 percent off its average hay production — a shortfall that has ramifications for the state’s dairy, beef and equine industries. 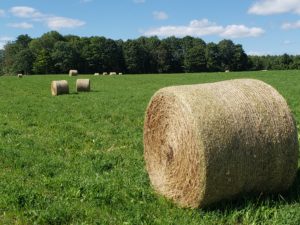 Bangor Daily News photo/Ernie Clark
HAY THERE — Round bales of hay sit in a field along Route 15 in Dover-Foxcroft.

Summer heat has slowed the growth of hay grasses in Maine that generally prefer cooler and moister conditions, and other sources of hay when the state’s crop is slow to grow, such as the Canadian Maritimes, are facing similar drought conditions that have slowed their own crops.

The COVID-19 pandemic also has complicated trade between the United States and Canada.

“Some farms are getting no second cuttings, some got some second cuttings but probably won’t get a third,” said Kersbergen of the Maine crop. “The shortage is really in the second and third cuttings.”

This marks the second straight year Maine’s hay crop has been a victim of the weather, but last year’s woes stemmed not from drought but from excessive rain.

The 2020 hay season actually got off to a good start, with plenty of lingering moisture — a May 9 storm dumped a foot of snow in central Maine — to boost water tables and leave fertile fields  ready for growth.

“The first cutting of hay, which is usually done in May and June, was a really good harvest,” Kersbergen said. “We had great weather for it and a lot of people got a lot of good quality, early cut hay.”

But when the frequency of rain slowed, the growth of both lawns and hayfields began to dry up.

The latest U.S. Drought Monitor map of Maine shows some degree of drought in all areas of the state save for some of the western mountains.

Much of the state, including the coast, central and northwestern Maine, is considered abnormally dry, while northeastern Aroostook County and parts of Piscataquis and Somerset counties in the center of the state are dealing with even worse conditions labeled severe drought.

“The [hay] quality changed a lot during those three weeks at the end of June and the beginning of July because we had so much hot and humid weather,” said Higgins from his farm in southwestern-most Penobscot County. “Then anyplace that’s high where the ledge might be close, it’s been a terrible crop.

“And when you get outside of this area, 50 miles north of us or 20 miles south of us toward the coast, it’s been worse than it’s been here.”

It’s not just the lack of rainfall that has diminished the hay crop but temperatures that have ranged near and into the 90s frequently throughout the first two months of summer.

Hay-growing conditions may be even worse in parts of Aroostook County, where Caribou reported temperatures of 95 and 96 degrees on back-to-back days in mid-June.

Higgins tells of buying 1,000 round bales from one hay producer in Sherman last year but was able to buy just 380 bales from the same man this year.

“I deal with people down south, too, and everybody’s crying about having no hay,” Higgins said.

The shortage of hay to the north may present an even larger challenge for farmers elsewhere in the state. The County and parts of eastern Canada are frequent hay suppliers when the market is tight in Maine, but the lack of rainfall in those regions means less product for farmers there to sell.

“You’ve got to think about it in terms of where some of the markets are,” Kersbergen said. “If you’re a commercial grower a lot of the hay actually goes out of state to Massachusetts, Connecticut and Rhode Island, and if we need to bring in hay it usually comes in from Canada.

“Some of the hay we get also comes from Aroostook County from fields that are in rotation with potatoes, but if you’ve followed Aroostook County weather, they’ve been extremely dry as well.”

“That was off some — not terrible — but this hay we’re getting the second cutting off was harvested before the middle of June so it had a long time to come back,” he said. “The stuff that we baled after July 13th has not done well at all because it’s been so super dry.”

Higgins and Kerbergen said there remains time for the hay crop to rebound before the end of the growing season, though one variable will make all the difference.

“Every time we get just a little bit of rain the hay takes a jump where it’s still surviving,” Higgins said. “There’s still time to improve — if we get the water.”