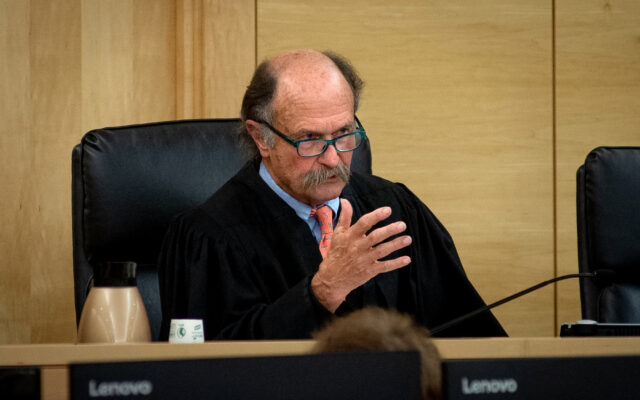 Contributed • November 28, 2022
By Judy Harrison, Bangor Daily News Staff A judge who presided over the Queen City’s most horrific murder trial and whose decision over a transgender student’s access to a school bathroom helped change the law stepped down last week after nearly three decades on the bench.  Superior Court Justice William Anderson, who presided most often in Bangor and Dover-Foxcroft, retired Nov.

A judge who presided over the Queen City’s most horrific murder trial and whose decision over a transgender student’s access to a school bathroom helped change the law stepped down last week after nearly three decades on the bench.

Anderson, 74, of Thorndike said that he decided to retire now because his seven-year term is up and he is frustrated with the backlog of cases in Bangor due to the pandemic. He also cited the crisis facing the Maine Commission on Indigent Legal Defense and is troubled by the lack of lawyers available to take court appointed cases.

“COVID has horribly impacted our work and it’s not as rewarding as it was before the pandemic,” he said last week. “It’s hard to have job satisfaction with so many obstacles.”

Anderson handled one of the most high-profile civil cases in Maine. The Maine Supreme Judicial Court in January 2013 reversed Anderson’s ruling for the Orono School Department, now Regional School Unit 26. In a  5-1 decision, Maine highest court found that it violated the Maine Human Rights Act to deny a transgender student, Nicole Maines, now 25, the use of the girls’ bathroom, the gender with which she identified. It was the first time a court in the U.S. had assured that right to a transgender person.

Maines is an actress in Los Angeles who appeared as the first transgender superhero on the television show “Supergirl.”

“I followed the law at the time,” the judge said. “I didn’t understand why the MHRC didn’t just change the rule about access to bathrooms in schools but I was told there had been pushback against that so the MHRC and the girl’s parents decided to bring the lawsuit instead.”

Anderson said that one of his most memorable cases was the murder trial of two Massachusetts’ men accused of killing three young adults in 2012 and setting the car their bodies were in on fire in the parking lot of a Bangor business. Testimony in the case took three weeks. Jurors deliberated for a week, the longest on record in a murder trial in Maine, before finally announcing the verdict.

Jurors found Randall Daluz, now 45, of Brockton, Massachusetts guilty of three counts of murder in the deaths of Nicolle Lugdon, Daniel Borders and Lucas Tuscano and one count of arson. The jury found Nicholas Sexton, now 41, of Warwick, Rhode Island, guilty of arson and killing Lugdon but deadlocked on the murder counts for the other two victims. Anderson sentenced Daluz to life in prison and Sexton to 70 years, a de facto life sentence.

Deputy Attorney General Lisa Marchese prosecuted the case. She said that Anderson “was firm while still maintaining a sense of humor and demonstrated incredible patience during the tedious jury deliberations.”

“There were multiple long arguments over heated issues and he always listened to all sides before ruling,” Marchese said. “May 2014 was a long month for all involved in this trial but Justice Anderson kept the trial going in a fair, methodical manner.”

Superior Court Justice Robert Mullen, chief judge of the Superior Court, said that Anderson “epitomizes what it means to be ‘a judge’s judge’ who never passed on an assignment no matter how complex the issues are or how controversial the topic might be.”

Anderson also was praised for his wry sense of humor, his thorough and thoughtful rulings and individualizing each criminal defendant who appeared before him.

Anderson was first appointed a District Court Judge in May 1993 by Gov. John “Jock” McKernan. Gov. John Baldacci elevated Anderson to the Superior Court bench in early 2008. Before becoming a judge, Anderson was the district attorney in the midcoast. He also worked as an assistant attorney general prosecuting homicide cases.

Before practicing law, Anderson worked as a sailmaker in Maine, Massachusetts and Ireland.

He is a graduate of South Portland High School, Trinity College in Hartford, Connecticut, and the University of Maine School of Law.

A consistent and winning contestant in the Kenduskeag Stream Canoe Race, Anderson said he will continue paddling but won’t be as able to convince law clerks to enter the race as he has for many years.

Cathy Stearns, 71, of Bangor and the court clerk who has worked closely with him the past 14 years, will retire on Wednesday. Stearns has been a court clerk in Bangor for 36 years, more than half her life. About 10 years ago, her colleagues started asking her when she was going to retire.

“I said I’d go when Justice Anderson went so I had to stick around,” she said last Monday.

Stearns is known for her sunny disposition, her positive attitude and a never empty candy dish. Maine Supreme Judicial Court Justice Andrew Mead, who worked with Stearns for many years as a Superior Court judge, described Stearns and clerks like her as “the front line players in the judicial system,” who are the justice system’s link to the public.

Lawyers were as quick to praise Stearns as were the judges she’s worked with.

“Cathy will be hugely missed because, in the most pleasant manner imaginable, she calmly mother-henned us — prosecutors, defense attorneys, pro se defendants, judges —  through complicated filing and scheduling issues,” Bangor lawyer David Bate, who defended Sexton in the triple homicide case, said. “If Cathy was on the case, she would work it out cheerfully and effectively.”

Stearns will take a month off, then return to the courthouse part time to help train the four new clerks at the Penobscot Judicial Center. Anderson decided not to take active retired status, which would have allowed him to take the bench occasionally.