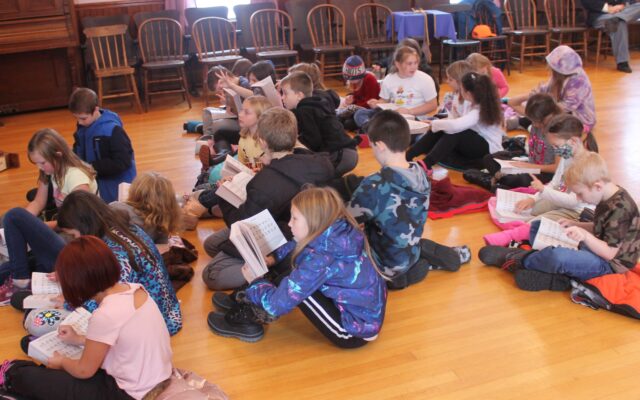 Valley Grange provides students with a tool for their trade

Stuart Hedstrom • November 21, 2022
GUILFORD — Commonly known as the Grange, the official name of the social organization encouraging families to promote the economic and political well-being of the community and agriculture is The National Grange of the Order of Patrons of Husbandry.  These words may not be in common vocabulary for elementary school children, but the Valley Grange No.

GUILFORD — Commonly known as the Grange, the official name of the social organization encouraging families to promote the economic and political well-being of the community and agriculture is The National Grange of the Order of Patrons of Husbandry.

These words may not be in common vocabulary for elementary school children, but the Valley Grange No. 144 of Guilford aims to give all third-graders across the region a tool to find out.

For more than two decades, the Valley Grange has given nearly 3,600 third-graders their own dictionaries thanks to the organization’s Words for Thirds Dictionary Project. The goal of this program is to assist all students in becoming good writers, active readers, creative thinkers and resourceful learners by providing them with their own personal dictionaries as gifts. Educators see third grade as the dividing line between learning to read and reading to learn.

The process for handing out dictionaries has varied over the years, including field trips to the Valley Grange at the corner of the Guilford Center Road and Butter Street and members of the Grange coming into the classroom. It was altered during the pandemic with some of the five schools across four districts only having boxes dropped off for distribution by staff.

For the first time in three years, Piscataquis Community Elementary School third-graders could take a short bus ride to the Grange Hall where 30-plus students from the two classrooms received their dictionaries on Nov. 17 to continue the long-time tradition.

With the third-graders gathered on the floor, and their teachers and a half dozen Valley Grange members watching, Valley Grange Program Director Walter Boomsma said, “Valley Grange is where you are, and we’re sort of like a club.”

After introducing those present, Boomsma explained the Grange was formed shortly after the end of the Civil War. To help the students learn a bit more about this period in United States history, 1st Sgt. (Wayne) Bennett explained he was dressed in a Union uniform.

Bennett also had another uniform and gear for a “recruit” as teacher Alicia Laweryson put on the coat, hat, pack and more to the students’ delight.

“The Grange started as a way to get people together, particularly farmers,” Boomsma said. He said the organization uses replica farming tools in its meetings, showing the spud (a weeding blade), shepherd’s hook, pruning hook and the owl, and explaining the role of each farming tool.

Boomsma said that during the 19th century most farmers lived out of town and had difficulty leaving their crops and livestock to travel to get their mail. So the Grange helped implement rural free delivery. With a mailbox on hand, a representative of each class came up to open the box and take out a letter.

The letters contained “patron” and “husbandry” respectively. “If we don’t know what a word means, what can we do?,” Boomsma asked.

Looking in their brand new dictionaries, the third-graders found the definitions of each word.

“Grangers call themselves patrons because we provide support,” Boomsma said, saying the dictionaries are a way to support the students.

“Grange people like to be good stewards and a steward is someone who takes care of things,” he said. Boomsma encouraged the third-graders to take good care of their dictionaries, which will be kept at school for now but later they will have these to keep forever.

The Valley Grange normally meets the third Friday of the month, at 7 p.m. with a 6 p.m. potluck. Next month the gathering will instead be on Friday, Dec. 2 with a fellowship breakfast at 6 p.m. (a morning-type meal will replace the traditional potluck fare) and Christmas program at 7 p.m.

Attendees can wear their pajamas and are asked to bring a breakfast dish to share. They are also asked to check in via the Valley Grange website or Facebook page.