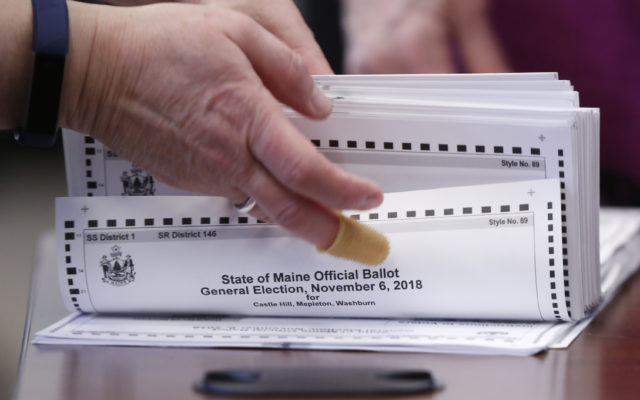 Contributed • November 13, 2022
By Judy Harrison, Bangor Daily News Staff A longtime Penobscot County commissioner was unseated Tuesday, Nov. 8 by a retired Millinocket man who worked in the Ronald Reagan administration and for the National Rifle Association.

A longtime Penobscot County commissioner was unseated Tuesday, Nov. 8 by a retired Millinocket man who worked in the Ronald Reagan administration and for the National Rifle Association.

Republican David Marshall, 72, beat Democrat Laura Sanborn, 74, of Alton, claiming 53 percent of the vote with results from about 90 percent of towns reported to the Bangor Daily News. As of late Thursday, Nov. 10, he had garnered 11,008 votes to Sanborn’s 9,668.

Sanborn, who represents Old Town and the municipalities north of there, was appointed in early 2013 by Gov. Paul LePage to fill the unexpired term of Democrat Stephen Stanley, 69, of Medway. He left the position after being elected to the Legislature. Sanborn was elected to the position in 2014 and reelected four years later, but by fewer than 400 votes.

The outgoing commissioner said Wednesday that she was saddened by her loss but hopeful for the future of the district she serves, especially the Katahdin region.

“I see profitable companies, good paying jobs and year-round recreational opportunities that will bring revenue into those communities where the companies are,” Sanborn said.

Sanborn has helped elected officials and municipal staff in her district solve problems by assisting them in contacting the right people in agencies that can give them the help they need.

“Municipal leaders know what they need, but often the number of hoops to jump through is challenging,” she said. “A little direction and some guidance is all that is needed to have the correct facts and data needed to make well informed decisions.”

She assisted organizations in the Katahdin region that help people struggling with substance use disorder and mental health issues to apply for and receive a portion of the $29.5 million in federal funds through the American Rescue Plan Act. The Millinocket Regional Hospital received more than $1 million to prepare for the next pandemic.

Marshall said that his top priority is relieving overcrowding at the Penobscot County Jail and addressing inmates’ mental health challenges. He said that commissioners need to move forward immediately on plans to construct a new facility, estimated to cost between $60 million and $80 million.

“The jail is antiquated to the point that it is nonfunctional and unsafe for the staff and inmates,” he said. “I know how much it will cost, but inaction will make it cost prohibitive to build.”

In other contested races in Penobscot County, independent Zachary Brandmeir, 41, beat Democrat Beth Seaney, 61, both of Hermon in the race for probate judge.

Brandmeir, a local lawyer, will replace Amy Faircloth, 62, of Bangor, who was appointed a District Court judge earlier this year. Edmond J. Bearor, 62, of Bangor will continue serving as probate judge through the end of the year.

Hiatt, who did not seek reelection and has refused to resign, has been charged with one count each of: possession of child pornography and aggravated invasion of computer privacy, both Class C crimes; stalking, a Class D crime; theft by unauthorized taking and violating a bail condition, both Class E crimes; and two counts of harassment, a Class D crime.

He has not yet been arraigned on those charges, and he remains free on bail.

In uncontested races, Sheriff Troy Morton, 53, of Eddington and Register of Deeds Susan Bulay, 69, of Old Town were reelected and Democrat R. Christopher Almy, 73, of Charleston was elected district attorney again after taking four years off from the job.

Republican Marianne Lynch, 61, of Bangor did not seek re-election after serving one four-year-term. Almy was first elected district attorney in 1985, in a special election, and held the job until 2018. He remained in the office working as an assistant district attorney under Lynch.