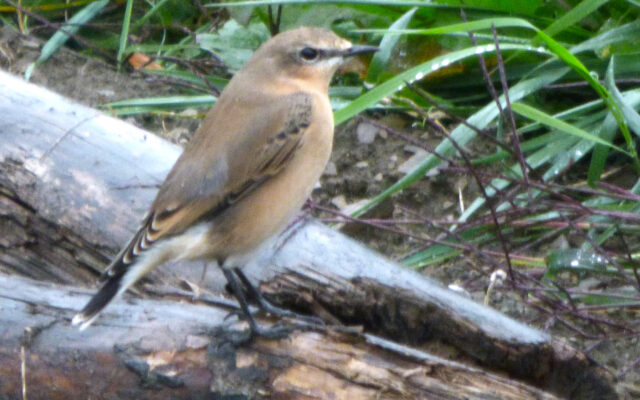 Contributed • September 22, 2022
By Bob Duchesne Maybe Mother Nature is trying to tell us something. Birds seem to be moving around the planet more than usual this autumn.

Maybe Mother Nature is trying to tell us something. Birds seem to be moving around the planet more than usual this autumn.

Earlier this week, an alert reader in Dover-Foxcroft sent me photos of a strange bird in her backyard. It was small and brownish, with a white butt. It looked like it might have white outer tail feathers. As is my custom, I promptly misidentified it.

Nope. Upon closer inspection, it was a very rare northern wheatear. This small songbird breeds in Arctic tundra. It was classified as a member of the thrush family for many years, but biologists now consider it to be more closely related to Old World flycatchers.

Wheatears nest widely across northern Eurasia. There are two distinct populations in North America — one in the eastern provinces of Canada, and a separate population in Alaska and British Columbia. What makes them so rare here is that all the world’s wheatears winter in Africa.

A wheatear wandering southward into the states is so rare, I know of only two other birds spotted in the lower 48 this month. One was on a beach in Kennebunkport two weeks ago. The other was at a sewage lagoon in New York City.

The odds of finding one in a Dover-Foxcroft backyard are astronomically low. This was the first wheatear ever reported in Piscataquis County.

It’s no surprise that wheatears across Europe and Asia migrate to Africa, but the fact that North American wheatears also winter there tells us something. Sometime since the last ice age, a few wheatears wandered over from the Old World and established colonies here. However, when it was time to fly south, they returned to their traditional wintering grounds, and still do.

Rarities seem to be less rare these days. Last winter, a Steller’s sea eagle made history by meandering from Siberia all the way to Maine. Less famous but equally unusual, another mega-rarity popped up on North Haven last month, and swiftly moved over to Weskeag Marsh in Thomaston.

It is the first European marsh harrier ever seen in Maine. Until the report spread like wildfire through Maine’s birding community, I had never even heard of that species.

Herring gulls, with their gray backs, are the most common gulls in Maine. The larger size and pitch-black topside color of the great black-backed gull sets it apart.

Lesser black-backed gulls are abundant in the Old World. They have a huge breeding range, from Iceland to Siberia. They have no known nesting colonies anywhere in the New World.

Yet, for some reason, many of them are now choosing to winter along our mid-Atlantic coast, all the way down to Florida. Though still unusual here, more of them are overwintering in Maine, too.

Since the dawn of time, birds have wandered. Some are merely lost or blown off course. Some are pioneers, seeking greener pastures. Considering the environmental changes on a warming planet, exploration for new suitable habitat elsewhere may be a good survival strategy for some species.

With bigger storms and longer droughts, Mother Nature may be suggesting to birds that it’s time to pick up their exploratory pace a little bit.

Perhaps there is a simpler explanation. Maybe nothing has changed in the bird world, but we’ve been getting better at spotting nomads. Birding has grown in popularity so much that there are simply more people with eyes on the natural world.

We’re also better equipped. With the proliferation of smartphones, nearly everybody keeps a camera in their pocket. Phones can be loaded with apps that help identify birds by sight and sound.

We’re also wandering ourselves a little more. As it happens, I’ve seen four northern wheatears this year. One was on a high mountain pass near Nome, Alaska. The other three were singing on territory in Denali National Park.

You’d think with all that recent experience, I would have known better than to declare “American pipit.”