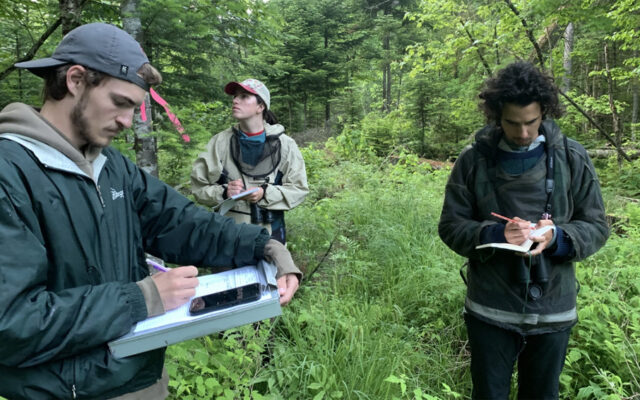 Contributed • August 15, 2022
By Susan Sharon, Maine Public Thirty years ago, as a paper company undertook a massive, 15,000-acre clear-cut near Moosehead Lake, a team of bird researchers had an idea. They wanted to document how songbirds are affected by commercial forest practices across a large landscape.

Thirty years ago, as a paper company undertook a massive, 15,000-acre clear-cut near Moosehead Lake, a team of bird researchers had an idea.

They wanted to document how songbirds are affected by commercial forest practices across a large landscape.

The results surprised them. They found that birds and logging can coexist with different ages and types of trees. Now, with the population of U.S. birds plummeting, the team is back to document how Maine’s North Woods may offer hope for their survival.

It was late June, about 4 a.m., when Jonah Levy and Jalen Winstanley, only half-awake, piled into their work truck to head into the woods.

Every morning, the two researchers, both in their 20s, were out before the birds woke up and began their full-throated chorus at dawn.

They’re one of several crews monitoring 300 different sites in this region across different forest habitats. On this day, they were counting birds just outside of Greenville on the west side of Moosehead Lake. Joining them was ornithologist and project director John Hagan of Our Climate Common.

He was part of the original study in 1992 that covered a million acres.

“Birds have declined continentally by like 30 percent since we did the original study,” Hagan said. “The forest has changed a lot. Used to be we talked about a lot of clear cutting going on at the time. There’s not much at all now.”

There are fewer paper companies now and clear cuts are limited to 250 acres in size. But Hagan said clear cuts have been replaced by partial harvesting operations, which means more of the forest is regularly cut each year. But the Ragmuff clear cut, the 15,000 acres that were harvested in the early 1990s, is now covered with trees.

“So, we want to know what all this change means for bird conservation and that’s why we’re back,” Hagan said.

The team parked the truck along a dirt road and walked 100 meters into dense, dark woods, dripping wet from a light rain. This was a mature hardwood forest. The trees were old and tall and there was a lush, closed canopy overhead. At the first stop Winstanley set a timer for 10 minutes and with the first hint of light, the counting began.

Each survey site covers a 50-meter radius. Anything larger, and accuracy suffers. That’s because all the recording, each and every bird, is identified by its call. So counting demands precision along with experience.

Jonah Levy described falling in love with bird calls after a friend’s mom shared a video of 30 common summer birdsongs in the Northeast.

“And I vividly remember the songs of the black-throated green warbler and the ovenbird coming up and having this sort of epiphany that I’d been hearing those every single summer day my entire life and I had never known what they were,” Levy said. “I wanted to learn what every other voice in the forest was and that’s a project that continues.”

Levy is now a Ph.D. student studying the relationship of land use to birds. At the 10-minute mark, the two compared notes about what they’ve heard inside and just outside the 50-meter site.

“Couple black-throated greens in” Levy said. “The scarlet tanager out was really nice. Black-throated blue, in.”

The data will be compared with the previous study and to bird populations in the rest of the country. So far, Levy said, they identified half a dozen new species that were not present in this area 30 years ago because their typical range was 100 miles to the south. There were also several species that were previously detected that have not been found — yet.

“Off the top of my head, I think those three are three-toed woodpecker, Philadelphia vireo and wood thrush, and I don’t think any of those were particularly abundant on the landscape 30 years ago,” Levy said.

So, there’s a chance that the birds just didn’t show up in their random sampling of the landscape. But that’s the purpose of this three-year study: to find out which species are moving in and which are in decline.

The precipitous drop in numbers over the past few decades is believed to be the result of habitat fragmentation and development, loss of wintering grounds, pollution and, of course, climate change.

Winstanley said he can’t imagine the voices of songbirds vanishing from the forest.

“Ultimately, our fates are entangled, so if they go down, we’re going down with them,” he added.

Back in the forest, Winstanley told Jonah, “All righty, shall I pull the flags and lead the way out?”

“Sure, yeah, sounds good. We can see a little better now,” Levy responded.

By late morning, the crew had recorded birds at five different sites and headed back to reconvene with the rest of the team at one of the houses they share in Greenville.

This is the gateway to Maine’s North Woods, the largest unfragmented forest east of the Mississippi River and at 12-million acres, one of the largest temperate forests in the world. It’s also considered a globally significant Important Bird Area by the National Audubon Society.

“I’m honestly bolstered because I think that this is a really important study,” said Hannah Mirando, a recent college graduate who’s been studying birds in the U.S. and internationally.

She’s encouraged that large landowners Weyerhauser, Landvest, Huber Resources and the Appalachian Mountain Club are partners in the three-year project. As timber managers, they’re in a position to respond to what the research shows is beneficial for biodiversity and for birds.

“Logging and timber seems like a very negative environmental thing, but I don’t think that it necessarily needs to be,” Mirando said. “We should be working towards both our goals together.”

Data gathered from the past two summers will be analyzed over the next few months.

Mirando said she’s especially eager to see how the findings affect forest management but also how they could influence other collaborative conservation projects going forward.