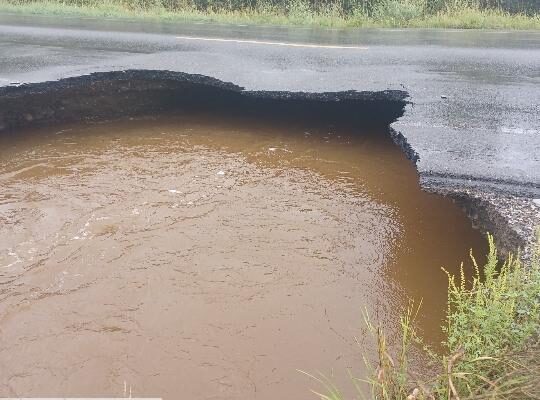 Around 10 a.m. is when patrons first stopped at the restaurant and inquired about the same spot along Route 6/15 that Calkins had driven over just a short while ago. A culvert collapsed, they said, and asked if she had seen the chunk of roadway that heavy rainfall took with it.

“I didn’t believe them at first,” she said Wednesday. She noticed rushing water near bridges and other spots along Route 6/15 the last two days, but didn’t think much of it.

The partially washed out road — and a 143-mile detour announced by the Maine Department of Transportation on Tuesday — was an inconvenience for nearly everyone traveling through Jackman before the road reopened late Wednesday. But the road closure wasn’t devastating to locals who know the town’s back roads and secret routes. The washout underscored how vulnerable Maine’s rural towns and infrastructure can be, especially when there are few roads to get to a community.

Maine Department of Transportation crews worked Tuesday and Wednesday to repair the section of Route 6/15 and reopened it Wednesday evening.

Mostly visitors and truckers faced delays as they diverted down Route 201 to Bingham and then followed Route 16 to Abbot to reconnect to Route 6 for those two days. Some changed plans altogether, like a family dining at Smokin’ Barrels that opted to go to the Skowhegan State Fair instead of visiting Greenville, Calkins said.

The restaurant saw an influx of customers Tuesday, with people asking for directions and looking at maps on their phones. By Wednesday, most people had figured out detours and plans, Calkins said.

And Jackman’s townspeople are resilient. They push through disruptions and help their neighbors, said Meg Welch, Northland Hotel manager, on Wednesday.

“It’s Jackman,” said Welch, who remembers when the road washed out in the same area more than a decade ago. “We’re kind of used to stuff like this. We can adapt. Delivery-wise, things seem to be showing up fine from what I can tell. Things come up [Route] 201.”

However, two hotel employees didn’t come to work Wednesday because of the road closure. They could have taken Route 6 Cutoff, a dirt road for logging trucks sometimes used by locals, but the rain also left back roads in poor conditions, Welch said.

Jackman, a town in Somerset County that hugs the border of Canada and the United States, is home to 782 residents, according to 2020 census data.

Rainfall observations are sparse in Jackman, according to the National Weather Service’s forecast office in Gray.

Between Monday and Tuesday, 2.25 inches and 1.83 inches of rainfall were reported in Stratton in Franklin County and Pittston Farm in Rockwood, respectively, a forecaster said Wednesday. Another half inch or so of rainfall was recorded between 4 and 6 a.m. Tuesday. Some locals said they measured 4 inches.

“Some vacationers are at a standstill,” Welch said. “Some are finding alternate routes. We try not to send too many people those ways because if something were to happen, they’re out in the willywacks, and they don’t know what they’re doing.”

For older drivers and those unfamiliar with the area, navigating a dirt road after rainfall could be risky, and some locals feared creating a bigger emergency, Welch said. Logging trucks also have the right of way, so people need to be cautious, she said.

Welch was calm about the situation, but people were concerned about emergency personnel responding quickly. A good number of people live on the east side of the washout and were cut off from the town’s service center, she said.

Before the road reopened, it was too soon for Patty House, manager at Jackman Trading Post, to say how the washout affected the souvenir shop. It was closed Tuesday, and customer presence didn’t appear to be any different than normal on Wednesday, she said.

House noticed a sign was placed near Route 6 Cutoff, giving motorists a more reasonable detour to the 143-mile detour. If it weren’t for that back road, House, who lives on Gilbert Street below where the road collapsed, would have been totally stuck, she said.