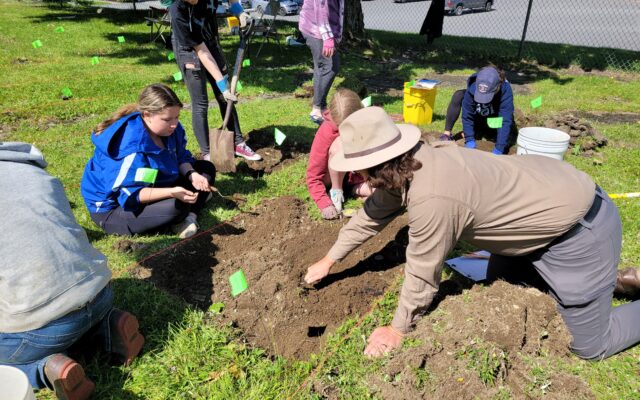 Valerie Royzman • June 23, 2022
DEXTER — An archeological dig has revealed bits and pieces of Dexter’s history from more than 150 years ago. Members of the Dexter Historical Society and a visiting archeologist have uncovered artifacts dating back to about 1860 during a three-day excavation at the town’s ice skating rink.

DEXTER — An archeological dig has revealed bits and pieces of Dexter’s history from more than 150 years ago.

Members of the Dexter Historical Society and a visiting archeologist have uncovered artifacts dating back to about 1860 during a three-day excavation at the town’s ice skating rink.

The Dexter Historical Society and David Keim, an archeologist based in San Antonio, Texas, and vacationing in Dexter this summer, led the dig, which wrapped up Wednesday.

The findings are likely tied to the Pleasant Street School that existed on the site from 1886 to 1968 and circuses, Fourth of July celebrations and other events that took place there, said Historical Society Director Rick Whitney. Unearthed items are being carefully documented and will eventually be showcased as an exhibit at the Abbott Museum & Gift Shop.

Whitney hopes to have the display ready for the public to view by Aug. 13, when thousands are expected to travel to Dexter for the annual Red Hot Dog Festival.

More than 20 volunteers participated in the dig, including children and adults. Others stopped by to view progress at the site at the corner of Pleasant and Common streets.

Among the findings are a piece of pottery, part of an 1860s inkwell, a slate pencil and many shards of glass and square nails, Whitney said about halfway through the final day of digging. Volunteers also discovered a chip of marble, which is surprising because the rock is not native to Maine and there isn’t a cemetery at the site, he said.

Community members uncovered fire pits that appear to date back to a time before the school was built, which is puzzling, Whitney said. He suspects that circus performers had tents and campfires set up in the area.

“You always find things that are unusual when you do a dig,” he said.

The site dates back to 1816, when Dexter was founded. Its many uses in the last 200 years included militia and fire musters, a fire company and a variety of town celebrations, according to the historical society.

Whitney and Keim planned the exploration after connecting in December while Keim was visiting family in Dexter, Whitney said. Keim works for SWCA Environmental Consultants, but the event was not affiliated with his workplace.

A flat 20-by-30-foot area below the ice skating rink that hasn’t been graded or touched, or 60 plots, was identified for the dig. Volunteers dug in 21 of the plots, and they noticed that most of the findings were concentrated in one quadrant, Whitney said.

They used a sod cutter before switching to a trowel to dig through the ground. A pickaxe was needed to break through tar in some areas. Sometimes dirt needed to be sifted through to find small items, Whitney said.

“It’s hard and tedious work,” he said. “The sun is hot. Now we’ve got to backfill these.”

Archeological digs are a good way for communities to learn about their history and what life was like for inhabitants centuries ago, Whitney said. Leaders from historical societies in Monson and Winthrop stopped by the event and expressed interest in doing something similar in their towns, he said.

“It’s something you can do in almost every town if you have access to an archeologist who can head up the site,” he said. “It’s a great educational experience for people.”