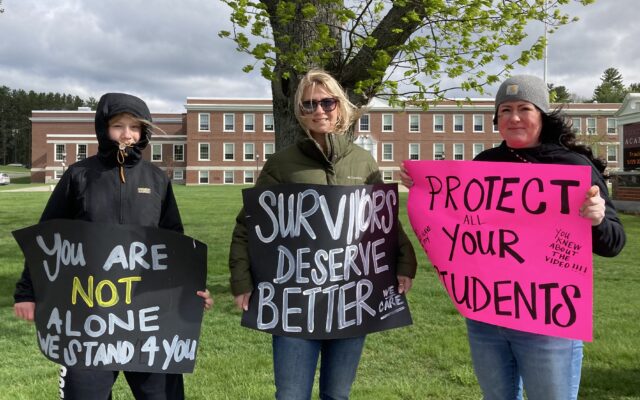 Valerie Royzman • May 18, 2022
DOVER-FOXCROFT — Community members and several students protested Wednesday outside Foxcroft Academy in support of a student allegedly sexually assaulted by two classmates in February. Just under 20 people, including parents and area residents, held signs reading, “You are not alone.

Just under 20 people, including parents and area residents, held signs reading, “You are not alone. We stand 4 you,” “Down with rape culture,” and “Believe victims, not rapists.” Some people driving along West Main Street honked in support.

Organizers of the protest originally planned a walkout, where students would leave the school as the first bell rang and join other people peacefully protesting outside. The goal was to support the alleged victim and get the two teens accused of sexual assault removed from attending Foxcroft Academy in person, said Elizabeth Walsh, one of the organizers. Last week, a district court judge decided that the 17-year-old from Dover-Foxcroft and 16-year-old from Charleston may attend school in person, though they are to have no contact with the victim and witnesses.

After a school official said late Monday that the teens are not attending classes on campus, and announced on Tuesday that Foxcroft Academy would switch to remote learning, the event still was held to support the victim.

The transition to remote learning Wednesday was in response to threatening comments made toward the school, officials said Tuesday. There was no information about the nature of the threat, so it is not known if the comments are connected to the alleged sexual assault.

The teens accused of the sexual assault have not attended school on campus since the court date, which was May 13, Head of School Arnold Shorey said Wednesday. He declined to say whether they were learning remotely or whether the decision was made by the school or requested by the teens and their parents.

Outside Foxcroft Academy on Wednesday morning, Ashley Gosselin held a sign that read, “Protect Victims!” Family members, including her husband, sisters-in-law, nieces and children joined her.

“I’m a victim myself of previous sexual assault, and I know how it feels,” she said. “The repercussions of that go on for so long. My goal is for this victim to just feel the love and to know that his community is behind him.”

Gosselin, who doesn’t know the victim or the teens accused of sexual assault, said she is praying for everyone involved and hopes the two accused students get the help they need.

When sexual assault incidents unfold, not only locally but everywhere, there appears to be a lack of support for victims, said Walsh, whose daughters attend Foxcroft Academy.

The private preparatory high school is handling the situation by not addressing the alleged sexual assault incident publicly, said a student who asked not to be named. The student held a light pink sign that read, “Do better, FA!!!”

“The [accused] students who were here until very recently were just allowed to go to school around the [alleged] victim,” the student said. “Just imagine how hard that would be. That’s not OK. That’s not right.”

Since news about the alleged sexual assault broke on Friday, it has touched the small town, said Dover-Foxcroft resident Bill Pike, who has followed news stories and interactions between community members online.

“From what I saw myself and watching the comments of parents and everyone else, this should have been handled a lot better,” he said. “Understandably anybody is presumed innocent until proven guilty, but more has come out. There’s video of it [the alleged incident] and those videos were distributed to other students. That sets the tone for a lot of other issues.”

A student, who is not listed in the Penobscot County Sheriff’s Office incident report obtained Friday, allegedly told Foxcroft Academy’s headmaster about a video of the alleged assault that was circulating around the school, prosecuting attorney Janice Stuver said during a court appearance last week.

Foxcroft Academy was made aware of the alleged sexual assault incident the Monday after February break, Shorey said Wednesday. Students were set to return to campus on Feb. 28, according to the school’s 2021-22 calendar.

“Then we followed protocols and educational laws,” he said. “There’s a big difference between something that happens on campus versus something that doesn’t happen on campus, which includes communication.”

When situations take place on campus or at school events, information is communicated to parents as quickly as possible, he said.

Two counselors employed by the school, who work year-round with students, are available to the student body for support, Shorey said. The school is offering support while also taking care to be sensitive toward the alleged victim, he said.

“With the recent controversy, we’ve been talking to our students about being supportive and respecting different points of view,” he said.

The school has dealt with issues of sexual assault involving students before, Shorey said, but he declined to comment on specifics.