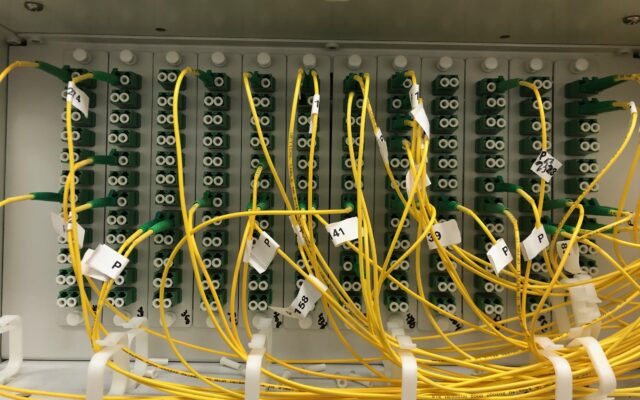 Maine sees broadband expansion as an opportunity to cut emissions

Contributed • May 17, 2022
This story is part of our series “Climate Driven: A deep dive into Maine’s response, one county at a time.” By Charlie Eichacker, Maine Public The coronavirus pandemic has shown how critical the internet can be during a disaster — especially to those who don’t have access to it.

This story is part of our series “Climate Driven: A deep dive into Maine’s response, one county at a time.”

The coronavirus pandemic has shown how critical the internet can be during a disaster — especially to those who don’t have access to it.

Early on, when it became clear that the virus is spread through in-person contact, many institutions were able to keep operating by shifting their activity online. But not all Americans could join that digital migration.

In Maine alone, some 15 percent of households still don’t have access to high-speed broadband. So while doctors increasingly saw their patients over video, that was less possible for patients without a computer or smartphone with a reliable connection. Or when schools shifted to remote classes, some families had to drive to the nearest public Wi-Fi hotspots.

“It creates huge challenges,” says Deb Rountree, who leads the Katahdin Higher Education Center, a remote learning facility in East Millinocket. “We literally during the pandemic had people come and sit outside in the parking lot, to use our Wi-Fi to connect to school, or to have their kids connect to the school.”

Now, those lessons are shaping how Maine officials are responding to another, even larger threat: global warming.

Just as the pandemic showed that many people could work from home on the internet, it also had an effect on the planet. Vehicle travel, which normally produces 54 percent of Maine’s greenhouse gas emissions, fell by a third during the early part of the public health crisis, according to state transportation data.

Based in part on that experience, the comprehensive Maine Won’t Wait climate action plan developed by the Mills administration includes a goal of extending high-speed broadband to 99 percent of Maine homes by 2030, up from the roughly 85 percent that now have it.

Administration officials say that Mainers would be less likely to use their gas guzzlers if they have an internet setup allowing them to work, study, receive health care or do other tasks from home.

But the evidence is mixed on whether expanding broadband would, by itself, lead to less driving or lower emissions.

While driving dropped sharply at the outset of the pandemic, Maine and national data show that it mostly rebounded by the second half of 2020, as health restrictions were lifted and the economy reopened. They’ve hovered around pre-pandemic levels since then, despite the fact that many Americans continue to do some work from home.

And while research on remote work has suggested that it could reduce the amount of driving that workers do, it could also increase vehicle use for workers who move further from their office to more car-dependent rural areas, and increase other forms of energy usage such as the heating required in home offices.

Even so, a variety of groups and institutions believe that broadband has a role in reducing Maine’s vehicle emissions, especially when paired with other transportation initiatives.

“Intuitively, if you’re working from home three or four days a week and planning trips so you’re not really going outside your town, I would think there would be some sort of drop in vehicle miles traveled,” says Joyce Taylor, chief engineer at the Maine Department of Transportation, who helps lead the transportation portion of the state’s climate initiatives.

While vehicle travel has rebounded over the last two years, Taylor says it’s hard to draw broad conclusions from that data because of the unusual circumstances of the pandemic. People may have driven more because public transit and ridesharing no longer seemed safe, or they sought outdoor recreational opportunities further from their homes — or they had no other option because their towns don’t have reliable broadband.

There are plenty of Mainers who could fall into that last category: the Mills administration estimates 78,000 locations around Maine don’t have access to high-speed broadband, according to the Bangor Daily News. High-speed is classified as download speeds of 50 megabits per second and uploads of 10 megabits per second.

Many of those gaps are in sparsely populated communities throughout Maine’s wooded interior or along the Down East coast — communities that are now hoping to tap a pool of up to $500 million in state and federal dollars that have been reserved for broadband expansion projects in Maine.

One example of those efforts is happening in Dover-Foxcroft. Chris Maas, a retired technology consultant who sits on the town’s climate action advisory committee, is trying to rally a coalition of towns in Piscataquis, Somerset and Penobscot counties to seek funding to extend high-speed broadband service.

Maas, who is active with a number of organizations, estimates his own driving fell from 15,000 miles a year before the pandemic to 12,000 miles today. He says that videoconferences have replaced many of the meetings in Bangor for which he previously might have driven 500 miles a week — at a cost he estimates at about $60 in gasoline today.

“That’s $60 dollars worth of gasoline that I’m not spewing the CO2 in the atmosphere,” he says. “And it’s less traffic on the roads.”

There are plenty of similar anecdotes about online services replacing the need to drive during the pandemic.

At the Katahdin Higher Education Center, Rountree says that the internet, however limited in the region, has been a crucial resource for non-traditional students who can take courses at the University of Maine at Augusta and Eastern Maine Community College without commuting to Bangor. She thinks there will continue to be strong demand for studying from home now that it’s been proven to work during the pandemic — especially as gas prices soar.

Health care providers have also greatly expanded their online presence during the pandemic, deploying videoconferencing to see their patients from afar. The number of monthly telehealth visits by Northern Light Health, a Brewer-based network of 10 hospitals, exploded from 1,538 in January 2020 to 22,010 the following January.

“Everyone knows about telehealth visits now,” says Luke Knowlton, a primary care provider at Northern Light CA Dean Hospital in Greenville, who uses Zoom to see patients at their homes or workplaces, or after they’ve traveled to clinics in Sangerville or Monson.

One patient got a checkup last summer from the inside of an excavator he was operating at a distant construction site. “The most important thing was that he got good care,” Knowlton says. “But an ancillary benefit was he didn’t need to use any gas and spend his money and take time off from work.”

Ultimately, it’s hard to predict whether the online shift that started during the pandemic will make a dent in the state’s fossil fuel consumption, or whether Mainers will simply find new ways to burn the energy.

Jonathan Rubin, an economist who researches transportation at the University of Maine, says remote work could eventually help keep driving down, but only if it’s supported by other policies that help people leave their cars at home. He also thinks that the high gas prices of late could make Mainers more reluctant to drive.

“Telecommuting can reduce emissions if done well,” Rubin says. “If a teleworker who used to drive to a central location stays at home, walks to the grocery store, walks to the neighborhood for some exercise, that all saves energy. But if they move further from their central location, or they start driving further to go to a grocery store because it’s no longer convenient on the way home for work, then it’s more.”

In addition to expanding broadband, Maine’s climate action plan also seeks to improve the ability of residents to get around by foot, bike or public transit, and encourage more densely developed communities in which homes are near shopping and other amenities. The Mills administration is also trying to reduce emissions by promoting electric vehicles and renewable energy sources.

Nick Battista, who chairs the ConnectMaine Authority, a state office that works to spread broadband, sees some other ways in which that expansion could help the state fight climate change. He said that high-speed internet could help Mainers use web-enabled programs to more efficiently heat their homes, for example, or to seek out rebates for buying electric vehicles or weatherizing their homes.

Additionally, Battista, who also serves as policy director of the Rockland-based Island Institute, says that expanding broadband could help rebuild trust in government programs among rural communities left behind by “the digital revolution” of the early 2000s.” With slow or nonexistent internet connections, those communities particularly struggled when kids had to switch to online learning during the pandemic.

“They have experienced firsthand the failure of our government to meet our needs,” Battista says. “We can’t solve climate change without taking care of some of those basic services.”

This story appears through a media partnership with Maine Public.