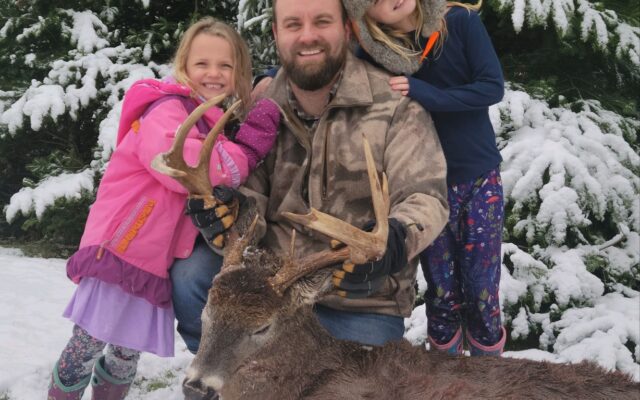 Contributed • January 11, 2022
By Pete Warner, Bangor Daily News Staff Chris Richards grew up in Dixfield immersed in Maine’s hunting and fishing culture. His parents and grandparents were avid outdoor enthusiasts who taught him an appreciation for those opportunities.

Chris Richards grew up in Dixfield immersed in Maine’s hunting and fishing culture. His parents and grandparents were avid outdoor enthusiasts who taught him an appreciation for those opportunities.

“Some of my earliest hunting and fishing memories are like fishing Wadleigh Pond [in Piscataquis County], staying in a tent with my grandfather,” Richards said. “Those traditions of going up into the big woods have always been the norm.”

Richards became a Registered Maine Guide, although the husband and father of two daughters has a full-time position as the vice president of enrollment management at the University of Maine.

When he can find the time, the Hermon resident serves as a guide for his favorite pastime, moose hunting, with OMM Outfitters of Eagle Lake. Richards also enjoys deer hunting, but doesn’t usually have much free time in November.

The day after Thanksgiving, he headed north for a day of late-season hunting. Yet even with his extensive experience and passion for hunting, Richards could never have anticipated the challenges he would face.

Unknowingly suffering from COVID-19, he shook off illness, exhaustion and stormy weather to experience one of his greatest thrills in the woods.

On Nov. 25, Richards rose at 2:45 a.m. bound for Wildlife Management District 4, north of the Golden Road, in search of a big buck.

“I had been moose hunting up in this region and actually had seen a fair amount of deer and deer sign in five days of hunting in this particular area,” Richards said.

Driving in the dark, the snow intensified. There were no other tire tracks on the road. Perfect.

Upon his arrival, as the excitement started to build, he was overcome with fatigue and a headache. He leaned back and took a nap.

“When I woke up the sun was completely up and bright and it was snowing like crazy,” Richards said, chalking his up the malaise to lack of sleep. “I’m like, alright, I feel better now.”

He jumped out and walked two miles, but never cut a track. He retreated to the truck and decided to visit an area that was being cut during moose season.

There he discovered the fresh track of a nice buck and followed it for about 20 minutes. He saw the flash of a deer tail on a distant ridge and pursued. Richards’ optimism gradually waned.

The deer never slowed, turned around or laid down.

“We zigzagged and went through the most brutal Maine cedar swamp you could imagine,” Richards said.

Finally, the deer turned to the north, away from the truck parked more than two miles to the south. With the snow unrelenting, he decided to abandon the chase at 2:30 p.m.

Richards, who had walked 17,000 steps, began the long trek back to the truck. He was thinking about the next day when it struck.

“All of a sudden, I got hit with the biggest wave of exhaustion I’ve ever experienced in my life,” said Richards, who suffered from a pounding headache and lightheadedness.

“I actually had to sit down and build a fire and get myself together. I felt that sick.”

The respite helped him regroup and get back to the truck. He sent a satellite message to his wife Jeanne, telling her how sick he was.

It was almost 3:30 p.m. Richards ate a peanut butter and jelly sandwich and took a few sips of coffee before heading home.

Before he could get more than a mile or two, Richards rolled past another large buck track crossing the road. He slammed on the brakes and backed up.

“It’s snowing as hard as it can snow and there isn’t even like a flake in it. Smoking fresh,” Richards said of the hoof print.

The adrenaline and his hunting instincts took over. He couldn’t resist.

“I kind of forget that I feel so sick. I said, ‘screw it, I’m going to follow it for half an hour,’” Richards said.

Within a half-mile, he came around a stand of young maples and there it was standing broadside, 35 yards away, feeding.

“He snapped his head up and looked at me and I touched one off and he was gone,” said Richards, who flashed back to his buck encounter six days earlier.

He found the buck 40 yards away.

“It was just a textbook, classic, flat-footed Allagash buck, a big, heavy eight-pointer,” he said.

The deer dressed out at 215 pounds, his second largest ever. Richards could hardly contain himself and sent Jeanne another message.

“Just shot a giant buck, I can’t believe it. Let everyone know,’” he said, noting the contrasting tone of the messages sent 35 minutes apart.

The saga was far from over.

“I was humbled,” he said, sensing the magnitude of the task.

He realized that it would be a shorter drag if he walked away from the truck toward a parallel winter road. Richards knew his truck could make it in there.

He walked to the truck and drove back to the deer. He struggled to coax it into the back of his pickup.

“It was that romantic north woods hunt that we all dream about,” Richards said.

Rather than go home, he drove west to Jackman to stay with his in-laws. He stopped often along the 97 miles of snow-covered logging roads to make sure the deer was still in the bed.

Still ecstatic from the hunt, Richards arrived at his in-laws’ house. He told them he wasn’t feeling well and kept his distance. He headed home in the morning.

On Sunday, after losing his sense of taste, Richards tested positive for COVID-19. Jeanne and daughters Kennedy, 6, and Ella, 5, also contracted the virus. They all spent two weeks in quarantine and recovered completely.

“I certainly didn’t think I was going to go up north, [later] find out I had COVID-19 and shoot a huge buck like that despite it, but that’s exactly what happened,” Richards said.

“It was definitely a blessing to get that buck, especially in the condition I was in,” he said. “I’m glad I had that little last push of motivation to try it.”