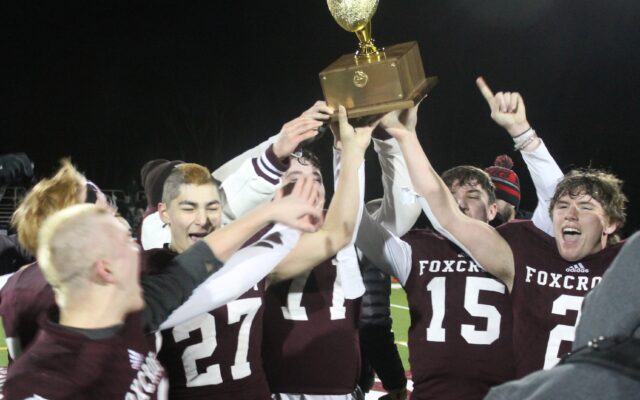 Contributed • November 22, 2021
By Ernie Clark, Bangor Daily News Staff BANGOR — The Foxcroft Academy football team has thrived on balance throughout the 2021 season and used its best on both offense and defense during the fourth quarter Friday night, Nov. 19 to hold off Winthrop-Monmouth-Hall-Dale 19-16 and win the Class D state championship at Cameron Stadium.

BANGOR — The Foxcroft Academy football team has thrived on balance throughout the 2021 season and used its best on both offense and defense during the fourth quarter Friday night, Nov. 19 to hold off Winthrop-Monmouth-Hall-Dale 19-16 and win the Class D state championship at Cameron Stadium.

Senior quarterback Austin Seavey’s 3-yard touchdown run with 11:33 left in the final period was the difference as the undefeated Ponies captured the program’s first state title since 2012 and capped off an 11-0 season.

Winthrop, seeking its first state crown since 2000, ended its season at 7-2, with both of the losses coming against Foxcroft.

Seavey’s scoring run came just three plays after Winthrop had taken a 16-12 advantage on a 2-yard run by fullback Dominic Trott with 29 seconds left in the third quarter.

“Coach brought us together and told us, ‘Guys, this is what we’ve been working for all year. We’ve really got to put it all into this drive. This has got to be the drive of the year,’” Seavey said.

“We were pretty amped up and getting a little nervous after they went ahead, so we just had to go out and execute and that’s what we did on those three plays.”

First senior halfback Jesse Drury took a handoff immediately after the kickoff and raced 33 yards into Ramblers’ territory, then Seavey lofted a deep pass over a defender into Caden Crocker’s hands along the left sideline for a 30-yard completion to the Winthrop 3.

Seavey ran a keeper to the end zone on the next play, and Kemsley Marsters booted the extra-point kick to give Foxcroft its 19-16 lead with 11:33 left in the game.

“That was the response that we needed to win the state championship,” Foxcroft head coach Danny White said. “We trusted Austin to make that throw down the sideline, we kind of knew that’s what we were going to do. We had two plays and that was the first one because of the look they gave us and he really delivered an unbelievable strike to Caden down the sideline. Then it was just a matter of punching it in from there.”

From there it was left to the Ponies defense to stop Winthrop twice on forays into Foxcroft territory.

The first drive ended when sophomore defensive back Jadon Richard broke up a fourth-down pass by Winthrop quarterback Andrew Foster to give the Ponies the ball back with 7:14 remaining.

Winthrop’s final chance, which began at its 26-yard line after the Ramblers recovered a Foxcroft fumble, ended on a fourth-down quarterback sack by senior tackle Anthony Smith near midfield with 55.2 seconds to play.

“It’s an unreal moment right now, said Smith while clutching the gold ball after the post-game awards ceremony. “Our defense stepped up in the second half. We started off slow, made many mistakes but we stepped up and won the game. This is crazy.”

Crocker, a junior slotback, made five pass receptions for 60 yards and a touchdown.

Winthrop used its potent ground game to control the clock for much of the night, as senior halfback Logan Baird rushed for 131 yards on 18 carries and Trott added 85 yards and two touchdowns on 12 rushes.

Foxcroft overcame a turnover on its first possession to build a 12-8 halftime lead.

A 38-yard return of the game’s opening kickoff by Drury gave the Ponies the ball at the Winthrop 47, and Foxcroft reached the 22 before fumbling the ball away to the Ramblers.

Winthrop then drove 79 yards in eight plays, all on the ground, to take a 6-0 lead on Trott’s 3-yard run off right tackle with 5:32 left in the first quarter. Trott’s scoring run came after he ran 21 yards up the middle on the previous play to advance the ball deep into the red zone.

Crocker returned the subsequent kickoff 27 yards to the Foxcroft 49, setting up a 10-play, 51-yard march to pull within 8-6 on a 13-yard pass from Seavey to Crocker with 52.3 seconds left in the period.

Seavey kept the drive alive with a 7-yard scramble on fourth-and-6 to give the Ponies a first down at the Winthrop 14, and Seavey found Crocker open in the middle of the end zone one play later.

Foxcroft took the lead on its next possession, driving 72 yards in eight plays. The Ponies were set to punt from its 36, but Marsters turned a mishandled snap into a 17-yard gain for a first down near midfield.

Drury scored one play later, taking a first-and-15 handoff from the Winthrop 48 and initially running to his right before reversing field back through the Winthrop defense all the way to the end zone to complete a 52-yard scoring run with 4:17 left in the first half.

Trott scored on a 2-yard run to give Winthrop back the lead at 16-12 with 29 seconds left in the third quarter.

The eight-play, 68-yard march began with a tackle-breaking 24-yard run by Baird and was aided by an unsportsmanlike conduct penalty against Foxcroft that kept the drive alive after the Ponies’ Gage Beaudry had stopped Baird for no gain on a third-and-5 play from the Winthrop 39.