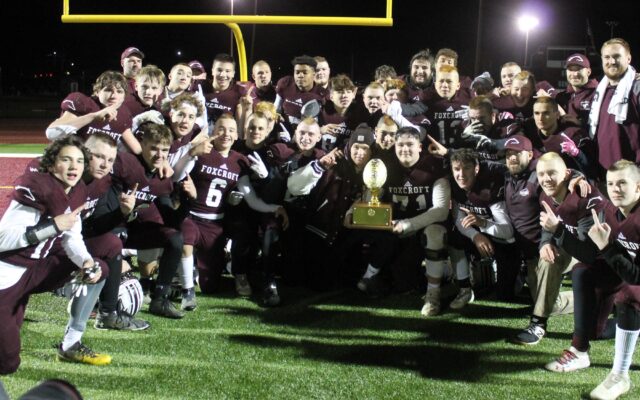 Ponies get past Winthrop to win state championship

Stuart Hedstrom • November 22, 2021
BANGOR — Trailing 16-12 at the start of the fourth quarter in the 2021 Class D championship on the new turf at Cameron Stadium on Nov. 19, Foxcroft Academy needed a touchdown in order to retake the lead for the first time since the first half.

BANGOR — Trailing 16-12 at the start of the fourth quarter in the 2021 Class D championship on the new turf at Cameron Stadium on Nov. 19, Foxcroft Academy needed a touchdown in order to retake the lead for the first time since the first half. The top-seeded Ponies would also need several stops on defense against No. 2 Winthrop High School (a cooperative program with Monmouth Academy and Hall-Dale High School of Farmingdale).

Foxcroft got what the team needed on both sides of the ball to win the gold ball by a final score of 19-16, the program’s first state championship since winning the Class C title in 2012. The berth in the Class D championship was Foxcroft’s third in the last four seasons of tackle football, joining 2017 and 2018.

The Ponies finished the season with a perfect record of 11-0, the first undefeated season for the program since the 2007 team went 12-0 on the way to winning that year’s Class C title. This year Class A champion Thornton Academy of Saco joined Foxcroft in compiling an 11-0 record. Eight-man large school champion Cheverus High School of Portland also won all its games, ending with an 8-0 mark.

With 29 seconds remaining in the third quarter, Winthrop (the Ramblers fell to 7-2 with both losses coming against Foxcroft including a 24-14 Pony road win on Oct. 22) scored as junior Dom Trott ran off right tackle from 2 yards out. Junior Robby Feeney followed by running the ball in for two to give Winthrop a 16-12 lead.

Junior Cameron Chase covered up the ensuing kick at the Foxcroft 34-yard line. On the first play from scrimmage, Pony senior Jesse Drury gained 33 yards to move the ball to the Winthrop-33. Drury tied for the game-high in rushing yards at 131, but he did so in only nine carries or half the 18 for Rambler senior Logan Baird.

On first down senior quarterback Austin Seavey threw a strike to junior Caden Crocker down the left sideline, moving the ball to the Winthrop-3. Crocker led all players with five receptions for 67 yards.

Following the Ramblers’ first timeout of the second half, Seavey kept the ball and spun around a would-be tackler to get into the end zone as Foxcroft retook the lead at 18-16 with 11:33 to go.. Seavey then held as sophomore Kemsley Marsters kicked the ball through the uprights to make the advantage 19-16.

“That was the response that we needed to win the state championship,” Foxcroft head coach Danny White — who won the second state championship in his 13 years leading the Ponies — said. He said the team “trusted Austin to make that throw down the sideline, we kind of knew that was what we were going to do. We had two plays and that was the first one because that was the look that they gave us. He really delivered an unbelievable strike to Caden down the sideline and then it was just a matter of punching it in from there. But that response, that was a championship-level response.”

Winthrop still had plenty of time to work with as the team got near Foxcroft territory on three consecutive first down runs. The Ramblers crossed the 50-yard line for a fourth-and-6 at the Pony-47. Winthrop senior quarterback Andrew Foster threw on fourth down but Foxcroft sophomore Jaydon Richard knocked the football down to allow his team to take over on downs at the 7:14-mark.

Five plays on the ground moved the football to the Winthrop-29 and ate up clock as Foxcroft faced a fourth-and-1. Seavey kept the football and ran four yards for the first, but the pigskin was knocked out of his grasp and Winthrop junior Gavin Willet recovered the fumble at the Rambler-26 to give his team life with 3:22 to play.

Four plays on the ground moved the football 27 yards to the Foxcroft-47 inside 2:00. After Foster was tackled at the line of scrimmage, Winthrop called timeout at the 1:16-mark.

The break in action gave the Ramblers time to go over a trick play as Baird tried a halfback pass. Crocker knocked the ball down for an incompletion and set up a third-and-10. Foster threw on third down but sophomore Jackson Smith made the play for another incompletion and forced a do-or-die situation for Winthrop.

Foster took the snap and rolled to his right as he looked downfield for an open receiver. He failed to sense Pony senior end Anthony Smith rushing from behind as Smith brought the quarterback down before he could get a throw off.

Taking over on downs at the team’s 48, Foxcroft went into victory formation with Seavey taking a pair of knees to run out the clock and close out the state championship game.

“It worked out and now we’re here,” Drury said before joining his teammates in celebrating with family, friends, and other fans outside the fence enclosing the field. “We just had to get our heads back in the game.”

“Those kids played well over there and they controlled the ball, they controlled the line of scrimmage a little bit too much, they controlled the clock,” White said about the Winthrop squad. “It forced us to execute at a high level in that third quarter on offense because time was running out and we were only going to get a couple of possessions and we had to make it count with at least one score. We got that one score and our defense got a couple stops because we gave the ball back to them one time too many times. You never know what’s going to happen and you have got to keep playing.”

“That was the big thing after that fumble, we were getting stops so just get one more,” he said.

“It’s not how you draw it up, but you know when it’s a state championship game and you’re playing for a gold ball you have got to play to the last snap,” White said. “It could be ugly at times and it could be uncomfortable at times and you just hope and pray that the position you put your kids in and the conditioning you’ve run them through that they’re prepared for a moment when things aren’t going well and tonight certainly we were uncomfortable and that’s a credit to them. They played a great game and we were just able to make a couple more plays and that was the difference.”

Winthrop opened the scoring with a 3-yard touchdown run by Trott just over halfway through the first quarter, the first points given up by Foxcroft in the postseason after shutouts in both the Ponies’ quarterfinal and semifinal contests played at Oakes Field. A rush by Fenney put the team ahead 8-0.

The Ponies responded with a 9-play drive to go from the team’s own 49 to the opposition’s 13-yard line. Here Seavey and Crocker connected on a 13-yard touchdown play with Crocker making the reception in the endzone to put Foxcroft on the scoreboard at 8-6 (the PAT was wide left).

Later in the second quarter, with a brief snowshower passing through, Foxcroft lined up to punt on fourth-and-12 at the Foxcroft-36. Marsters took the long snap and, after briefly bobbling the football, ran instead of punting and he gained 17 yards along the right sideline for a first down to keep the drive alive.

A false start pushed the line of scrimmage back to the Foxcroft-48. Here Drury took the handoff and he ran all the way to the end zone for a 12-8 Foxcroft lead (the 2-point rush attempt was not successful).

The 2021 Class D championship is the eighth in program history for Foxcroft as the team has played in different classes over the decades based on enrollment and/or the number of different divisions of football offered by the Maine Principals’ Association. The Ponies were part of a four-way tie for the Class D title in 1963 and had sole possession of the 1983 Class D championship. Foxcroft claimed Class C championships in 1967, 1996, 2003, 2007, and 2012.

Winthrop was playing for its first state championship since winning the Class C crown in 2000, and the Ramblers were in the finale for the first time since the 2008 Class C championship.