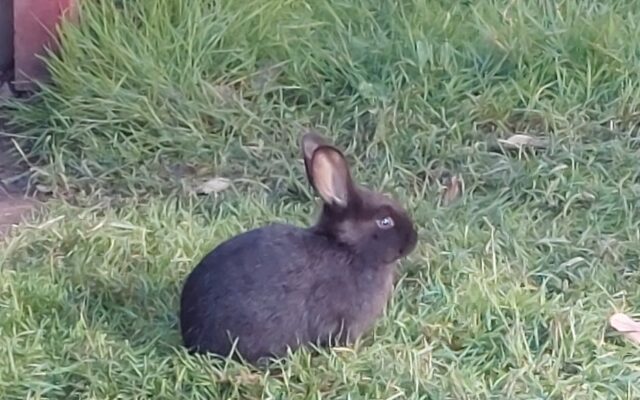 A teacher first discovered a family of cute, big-eared bunnies last week. It’s unclear how the domestic creatures arrived on school grounds. And, as bunnies do, they’re multiplying.

Over the last several days, the school has captured a few baby rabbits, but more siblings and the parents are still on the loose, and school officials worry it could be an ongoing problem if they aren’t caught soon. The babies are being placed with school employees and families who can provide good homes.

School employees suspect the rabbits were pets that escaped, or more likely, were deserted.

In the last several months, news stories from across the country have revealed that people are leaving their pet rabbits at parks and other places, and pet rescue groups are often swooping in to rescue the animals.

Principal Steve Bell first learned about the rabbits from a teacher who was having class outside and snapped some photos. Then talk of the bunnies started to spread.

“All of the sudden, you start talking to the kids and people around, [and] they’re like, ‘No, there’s multiple rabbits out there and they’re showing up all the time,’” Bell said, laughing.

The bunnies have mostly taken up residence under a wooden building behind the school, a space that some teachers and students use as a hands-on classroom workshop.

On Thursday and Friday, teachers and administrators caught four baby rabbits using traps that don’t harm animals, filled with carrots and lettuce. They almost had a fifth, but it got away, said special education teacher Kelly Tobin, who took on the task of finding interested families and rehoming the bunnies.

“They come into my room when we catch them,” she said. “Steve [Bell] and I both had cages and brought them here. We feed them and water them and my kids help clean their cages.”

The school has a policy that prevents keeping classroom pets long term, Bell said, “but we did selfishly keep one over the weekend so Kelly’s kids could get a chance to play.” For Tobin’s students, many of whom have severe disabilities, it was important to squeeze in some cuddle and care time with the bunnies, she said.

“I jokingly say that they’ve become like therapy animals,” Bell said. “They are cute and cuddly. They’re just babies.”

During a teacher workshop on Friday, staff members paid visits to Tobin’s classroom to hold the sweet creatures before they went off to their new homes.

“I’m not going to exaggerate and say all of my staff, but a high percentage of my staff were all down in her room holding them and petting them, which was a good thing,” Bell said. “It’s been a high-stress year with COVID and everything, so it was nice to have a diversion.”

Special education teacher Brian Salsbury didn’t assist in catching the rabbits, but his students did. He heard a rumor from some that a man in the neighborhood has “free-range rabbits that he lets run around,” and for some reason, they hopped over to the school to grow their family.

Females often have more than one litter a year because gestation lasts about a month, according to the Animal Diversity Web, an educational resource from the University of Michigan. The average litter size is five to six, though females can sometimes give birth to as many as 14 babies.

When Salsbury first told his wife, Jana, who works at the Tri-County Technical Center, about the bunnies, she said they didn’t need a new pet. She quickly changed her mind after she saw one gently resting in her husband’s hands.

“She decided we needed to get one for my stepson, Jameson,” Salsbury said. “We went out and bought him an expensive cage and food and everything.”

Salsbury feels good knowing his family has done its part in rehoming one of the rabbits. The animals weren’t likely to survive in the wild.

“I don’t think I would have taken one if we couldn’t provide him a good home,” he said. “I know he’s going to get a lot of attention, and he’s going to have a safe place to live.”