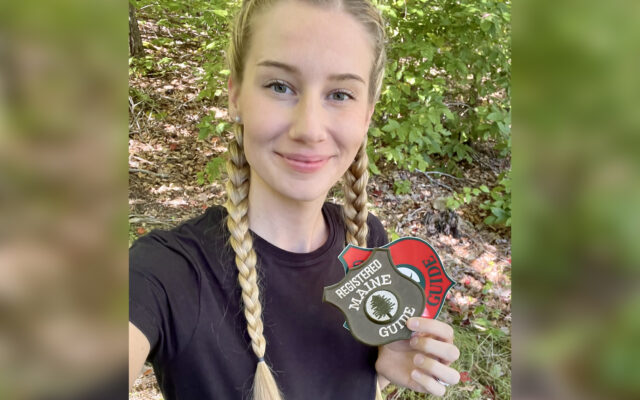 Contributed • October 8, 2021
By Aislinn Sarnacki I arrived early to my scheduled Maine Guide exam, then sat in the parking lot, attempting to put on a brave face. I was so nervous that I felt like I was going to vomit.

I arrived early to my scheduled Maine Guide exam, then sat in the parking lot, attempting to put on a brave face. I was so nervous that I felt like I was going to vomit.

A breakfast sandwich sat half-eaten in the seat beside me. And I started to worry that the coffee I’d ordered wasn’t actually decaf. I set the drink aside. I didn’t need to be any more of a jittery mess than I already was.

The clock struck 7 a.m. With a deep breath, I shoved my compass in my pocket, exited my vehicle and headed to the door of the Department of Inland Fisheries and Wildlife building.

“Are you carrying any weapons, firearms or your cell phone?” asked the woman who greeted me at the door.

I wasn’t. I had read the email stating the exam rules carefully. So I was allowed into the building. Without any small talk, the DIF&W employee handed me a booklet of 100 multiple choice questions, along with a pencil, then motioned to the cubicle where I could sit and get to work. I had 1.5 hours to complete the written portion of the test.

The silence stretched as I carefully read through each question, and I quickly realized that I didn’t know all the answers. However, I was fairly certain about most of them, thanks to months of studying.

I had toyed around with the idea of becoming a registered Maine Guide for years, but it wasn’t until the winter lockdown of the COVID-19 pandemic that I made the decision to go for it. Burnt out from years of writing nonstop, I needed a change. I considered going back to school, then — all at once — it hit me. Through my writing, I’d been guiding people on outdoor adventures for years. What if I could do it in person? What if I could walk beside them and point out everything that I find to be so wonderful about the Maine wilderness?

It sounded too good to be true, but that’s exactly what Maine Guides do.

So I did what any perfectionist does: everything. I ordered and read books suggested on the DIF&W website, studied animal print charts and practiced canoe strokes while out on the lake near my house. I attended a four-day Maine Guide training course offered by the Maine Outdoor Learning Center. And I drove to the western edge of the state for a wilderness first aid course led by Jon Tierney, an instructor for Wilderness Medical Associates International and a legend in Maine’s outdoor community.

I filled a notebook with handwritten notes, over-highlighted material and created a stack of notecards that my two cats enjoyed knocking over frequently. I YouTubed different methods of tying knots such as a square knot and trucker’s hitch, then tied the legs of my kitchen table together.

I practiced finding bearings and measuring distances between points on a topographical map — over and over and over. In the process, I think I found every way there was to mess that up. And in the search for the perfect compass for that specific task, I switched three times. (Anyone need a compass?)

The more you learn, the more you realize there is to learn. I first noticed this when writing newspaper articles. A topic would carry me down a rabbit hole of information until I was reading a scientific study about the eating habits of opossums. So, while I studied a great deal for the Maine Guide exam, I knew there was no way I could ace every question thrown my way.

Lucky for me, the two examiners for the second part of my exam, the oral portion, understood that. In fact, that’s one of the first things they told me: I wasn’t expected to know everything.

But I still had to know a lot.

The oral exam started in a room with chairs for me and the examiners, plus a map and navigational tools. There aren’t really any secrets that I’m at risk of giving away. The exam is different for everyone because they take into account what you want to do with your license. It’s similar to a job interview — plus a hypothetical catastrophic event that you had to solve to the best of your ability.

I’d heard that the examiners try to intimidate you and trick you, but I didn’t experience that. They did ask tough questions, and they didn’t tell me whether my answers were right or wrong. I think they must practice their poker faces.

The map and compass portion was pass or fail. That meant that if I messed up, I’d have to return and try again in a month. Talk about nerve wracking. My hands, which never shake, were shaking — which was inconvenient when trying to draw a straight line from point A to point B and place my compass on that line just so.

We then walked into another room, which contained all sorts of items for identification and demonstrating skills. They asked me about two knots that I didn’t know how to tie. But I nailed most of the animal and plant IDs, and I was well prepared for anything that had to do with canoeing or boating. When our hour ran out, they sent me back to my cubicle while they discussed my fate.

“Your ears should be burning,“ one examiner said. “We’ll come get you when we’ve made a decision.”

A few minutes passed before I was beckoned.

“So I have some good news, and some bad news. What do you want first?” one examiner said.

For some odd reason, I chose the bad news. Maybe I’m a bit of a pessimist.

“You’ll need to find a seamstress,” he told me.

I got the joke straight away. He meant that I’d need to have my guide’s patch sewn onto some of my clothing.

I felt tears well up in my eyes but I forced them away as I listened to the kind things they both had to say. Their words will always stick with me, but some things I’d like to keep private.

Of course, I called my family right away. I couldn’t wait to tell my father, whose father, my “Grandpa in the Sky,” was a Maine Guide for many years. I never got to meet him because he died before I was born. But I have his hazel eyes. I’m proud to carry on his and my father’s love for the Maine outdoors.

Now I can share that love in a new way with others, out on the trails, as a guide.