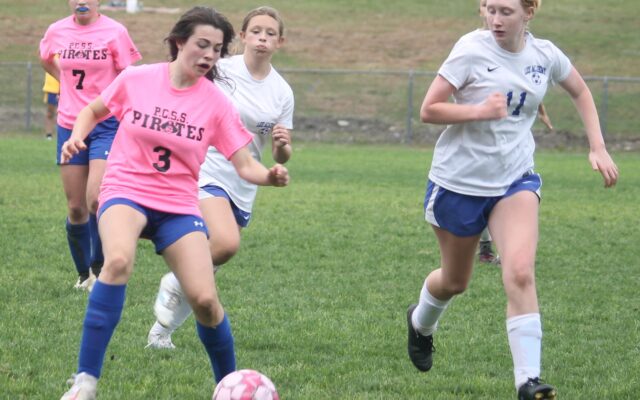 Stuart Hedstrom • October 4, 2021
GUILFORD — There was a lot to celebrate off the field for the Piscataquis Community High School girls soccer team prior to and after a game against Lee Academy on the afternoon of Oct. 2.

GUILFORD — There was a lot to celebrate off the field for the Piscataquis Community High School girls soccer team prior to and after a game against Lee Academy on the afternoon of Oct. 2. The school was celebrating its 2021 Homecoming with the other Pirate teams playing earlier in the day — the field hockey and boys soccer squads both won, it was Senior Day for the girls soccer team, and the latest class in the PCHS Athletic Hall of Fame was being enshrined Saturday evening.

The Pirates also had a lot to celebrate on the field against Class D North Lee Academy, as the home team earned a 3-0 victory with two goals coming in the second half.

PCHS (the team improved to 2-4 with the win) dominated in shots on goal, putting the ball on net 17 times in both halves compared to just two shots in 80 minutes for the Pandas (0-7). Pirate keeper Lauren Robinson made a save in each half for her first shutout of the season. Lee was held scoreless for the sixth time in seven games this season.

The Pirates also had a 5-0 corner kick advantage.

Lee goalkeeper Harmony Vermanzani had a very busy day as she made 22 saves, nearly evenly divided between the 40-minute sessions at 12 and 10 respectively.

The only needed goal for PCHS came with 9:30 to play in the first. Kendall Kimball fired off a crossing pass from the left side of the box as Ariana Fanjoy ran in. Fanjoy received the pass and directed it in for the 1-0 advantage.

Kimball would have a goal of her own in the second half. Molly Sipple dribbled toward the box when she passed the ball down the field to Kimball. From the left side of the net Kimball put the ball in for a 2-0 lead at the 20:20-mark.

Grace Buehne scored goal No. 3 with 3:17 remaining as she snuck a shot inside the left post. Abbey Ricker picked up an assist on the play.

The two teams are scheduled to play again in Lee on Thursday, Oct. 14.

The six members of the Class of 2022 from the PCHS girls soccer team recognized during the pregame ceremony were Grace Buehne, Kaitlyn Cookson, Ariana Fanjoy, Hailee Hartford, Jessie Mayberry, and Shanaia Milano.