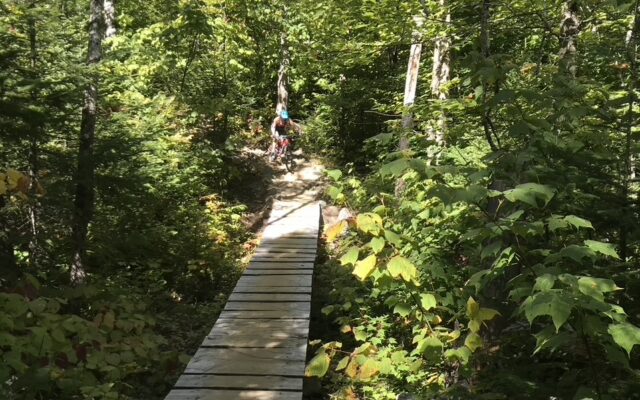 Stuart Hedstrom • April 14, 2021
The outdoor recreation attractions in and around the Moosehead Lake region could soon include up to 25 miles of mountain bike trails on Little Moose Mountain Public Reserved Land. With the support of the town of Greenville, the nonprofit Moosehead Outdoor Alliance was formed with a mission to design and build a premier mountain bike trail system.

The outdoor recreation attractions in and around the Moosehead Lake region could soon include up to 25 miles of mountain bike trails on Little Moose Mountain Public Reserved Land. With the support of the town of Greenville, the nonprofit Moosehead Outdoor Alliance was formed with a mission to design and build a premier mountain bike trail system.

The project includes amending the Moosehead Region Management Plan to allow the development of mountain bike trails. The proposed amendment was the subject of a Maine Bureau of Parks and Lands webinar on April 7.

This type of recreation was not discussed during the original development of the Moosehead Region plan, but the Bureau of Parks and Lands said the concept is consistent with the vision for the area. The bureau prepared a draft plan amendment that would allow for the mountain bike trails in three delineated zones after discussing it with the advisory committee during a virtual meeting in February.

“It has gotten endorsement from the town of Greenville and some of the local business community, including some of the folks who have just purchased the ski resort property,” Bureau of Parks and Lands Senior Planner Jim Vogel said. “We have not heard many negative comments at that stage of the process.”

Vogel said the amendment to the development plan to add mountain bikes would allow for building up to 25 miles of new trails. “This would primarily be single tract, purpose-built mountain trail though there is the potential for at least multi-use wider paths on the east side of the unit connected to the town of Greenville,” he said.

Vogel said three zones, each between 300 and 400 acres in size, are involved and in total make up about 70 percent of the 15,000 total acres of the Little Moose area.

The mountain bike trails would feature varying degrees of difficulty to accommodate riders from novice to expert, and would benefit the community in the tourism-based economy, he said.

The trails could also be used for walking, jogging, hiking and cross country skiing.

The organization will seek state and federal grants and raise funds for the project.

Vogel said the trails will coexist with timber harvesting. “We want to minimize impact on the trail even though we acknowledge here it is impossible not to impact the trail when timber harvesting is going on. But with correct planning hopefully that can be minimized so there is not a lot of damage or trail repair or that sort of thing required after harvesting has occurred,” Vogel said.

Parking areas across the three zones, near Gravel Pit Pond, the Little Moose lot on Route 15 and at the North Road entrance, would all be improved under the plan.

Several requirements need to be met for the Bureau of Parks and Lands to approve the final plan, including determining specific trail routes — which could be done later this spring — and permissions from abutting landowners must be obtained.

The mountain bike trails would cross existing ATV/snowmobile trails so signage would be posted to let motorized and non-motorized riders know of each other’s presence.

“All trails need maintenance and that would be the responsibility of the trail proponents,” Vogel said. He said the New England Mountain Bike Association — of which Moosehead Outdoor Alliance is a member — is interested. The bike association  is a non-profit recreational trail advocate with more than 7,000 members and 28 chapters, including six others across Maine.

“There is excitement for this new era,” Vogel said. “Trail folks are eager to get started … on  actual on-the-ground trail planning as soon as possible.”