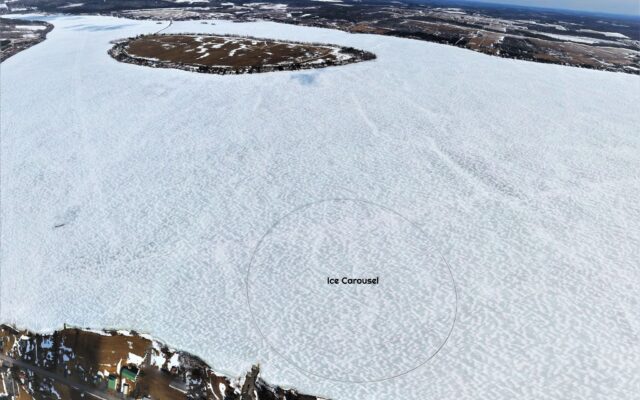 ST. AGATHA — A gigantic, circular chunk of ice cut on Long Lake in St. Agatha on Friday, April 9 may have what it takes to return a World Championship Ice Carousel record to Maine.

Northern Maine Ice Busters carved a disc with a diameter of 1,234 feet out of the icy lake in just one day using chainsaws and one of two inventions designed by St. Agatha plumber Roger Morneault.

Simply cutting the largest ice disc, however large the diameter, is not enough. The ice disc must spin for one full revolution to qualify for the world record ice carousel.

Morneault’s potato harvester blower motor modified with a 24-inch brass propeller will be used to spin the latest northern Maine ice disc at a public ceremony on Saturday morning, April 10

The volunteer group of between 20 and 30 ice carousel enthusiasts initially intended to cut a smaller disc, until a group based in Finland threw a frosty wrench in those plans. In February, the Finnish group successfully cut and turned a monster-sized disc measuring in at a little more than 1,000 feet in diameter.

The Ice Busters successfully carved out a 2018 World Record Ice Carousel on Long Lake in Sinclair in April of that year. The northern Maine championship ice disc was 427 feet in diameter and weighed 22 million pounds.

At 17 inches thick, the Long Lake ice this year was easier to cut through than during the 2018 endeavor, when the ice measured 31 inches.

Morneault is determined to see the Northern Maine Ice Busters reclaim the title for Maine.

“I don’t think we will — I know we will,” Morneault said.

Morneault’s confidence is based largely on the strength of his homespun inventions.

Besides the modified potato harvester to provide motion, the industrious Mainer doubled the teeth on the chainsaw of a Ditch Witch dirt trencher so the machine could cut through ice.

The Ice Buster volunteers on Friday used augers to drill 1,280 holes in perfect precision, thanks to volunteer surveying efforts from Sackett and Brake Survey Inc., which has an office in Dover-Foxcroft. Morneault’s trencher cut between the holes to complete the disc which measured in at a circumference of 3,800 feet.

The elder David DeMerchant said he regretted not seeing the 2018 ice carousel at Long Lake, and suggested the opportunity to his son and daughter-in-law, who were visiting.

“I never got up here to see it,” he said. “I had surgery in Portland and they came up to stay with me awhile, so I said ‘let’s go see it.’”

Roger Morneault is confident his modified potato harvester will do the job in terms of spinning the carousel, but said it is not guaranteed.

“Never anywhere on planet Earth has this been tested,” Morneault said. “We’ll see if it works.”