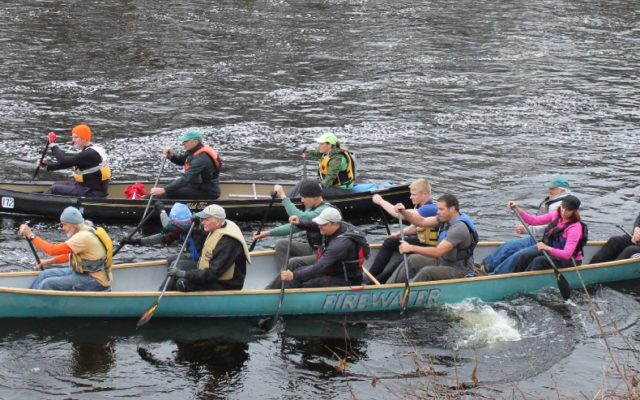 Spring paddling can be dangerous. Here are some tips for staying safe.

Contributed • April 1, 2021
By Aislinn Sarnacki, Bangor Daily News Staff As ice melts from the landscape and waterways open up in the spring, you might find yourself itching to toss a boat in the water. That’s perfectly fine, but there are a few things to consider before you start paddling or motoring around.

As ice melts from the landscape and waterways open up in the spring, you might find yourself itching to toss a boat in the water. That’s perfectly fine, but there are a few things to consider before you start paddling or motoring around.

Certain elements of spring add extra dangers to water sports in Maine. First and foremost, the water — both inland waters and the ocean — is especially cold in the spring, which heightens the risk of becoming hypothermic or drowning if you fall out of your boat or it capsizes.

“I actually measured the water temperature in a salt bay when I was paddling the other day and it was 42 degrees,” said Karen Francoeur, a Master Maine Guide who owns and operates Castine Kayak Adventures. “And on the river yesterday, there were huge icebergs.”

An expert paddler and one of the state’s top educators on paddling safety, Francoeur starts paddling privately as soon as the ice melts in the spring. But she’s cautious to only paddle with fellow experts, and even with her experience, she avoids certain paddling locations — such as areas where chunks of ice are still floating around.

“The risk factor is just so much higher, certainly in March, but in April and May, too,” Francoeur said. “A really beautiful day can turn bad awfully quick. All the things you usually do to be safe on the water you should do even more this time of year.”

After winter, bodies of water take time to warm up in Maine, especially deep lakes and rushing waterways that are being fed by spring run-off. The ocean is also slow to warm.

In March, the temperature of the ocean off the coast of Maine is in the high 30s. In April, the low 40s. And in May, it starts to creep up into the mid to high 40s, according to National Weather Service data.

“Two weeks ago, a lot of these bodies of water had ice on them,” said Lt. Jason Luce of the Maine Warden Service, who serves as the state’s Boating Law Administrator. “So, if you fall in, you have very few minutes, if that, before hypothermia sets in, your body starts to go numb, you lose all control of your appendages and you aren’t able to swim.”

In addition to the water being especially cold, the spring freshet (run-off from melting snow and ice) causes water levels to rise and currents to pick up speed, Francoeur said.

“During the logging days, they ran logs on the spring freshet because the waters were raging and moving,” Francoeur said. “And the Native Americans would take the spring freshet to the sea and then paddle back in the fall, which means they could go against the current in the fall. As summer progresses, everything gets warmer and more manageable.”

Trees downed by winter storms are another common hazard that boaters face in the spring. If blocking waterways, these trees are known by boaters as “snags,” and they can easily injure you or cause your boat to flip. And, if you run into trouble, there are far fewer people out on the water during the spring to aid you than during the height of summer.

“Generally early in the season nobody’s around,” Francoeur said. “So you might not have anyone around to help you.”

When and where is it safe to boat in the spring?

If you want to go paddling or boating early in the season, there’s no set date for when you should or can start, Francoeur said. It depends on the body of water you want to explore and your skill level.

“This time of year, I really like going to marshes and zigzagging through the trees,” Francoeur said. “Because the water is high, you can access places you usually can’t. And the birds — the birds are coming back. You can see all different kinds of birds from the water.”

Shallow ponds, marshes and slow-moving streams are great places to paddle early in the season, Francoeur said, because they tend to warm up faster and their calm waters are easier to navigate than swift-moving currents. In addition, Francoeur suggests sticking close to land. That way, if you do fall into the water somehow, you can easily reach shore and recover.

“At Hirundo [Wildlife Refuge in Old Town], Pushaw Stream can be nice,” Francoeur said on March 29. “I paddled that a couple of times last week and it was beautiful and sunny. I paddled without gloves and the water didn’t feel horribly cold, though it would have if I’d capsized in it.”

How to increase your safety while spring boating

Paddling and boating, like any outdoor activity, always comes with risks, but you can minimize those risks by taking precautions and building up your skills and experience.

The number one thing you can do to improve your safety on the water is to wear a life jacket at all times, said both Luce and Francoeur.

“You’d be crazy to paddle this time of year without wearing a well-fitting life jacket,” Francoeur said. “It keeps you afloat and it keeps you warmer.”

From 2015 to 2019, Maine had a total of 38 boating fatalities, and 22 of those fatalities were drownings of people who weren’t wearing life jackets, Luce said.

“I get that [life jackets] are uncomfortable sometimes, especially when it’s really warm out and people are trying to soak up the sun,” Luce said. “But wear your life jacket and it will save your life.”

Another way to increase your safety is by checking the weather to avoid high winds and storms, Luce said. He also suggested knowing or studying the body of water you intend to visit, and checking current conditions there. A river in the spring can be very different from the same river you visited in late summer.

Being prepared with proper clothing and gear is also key, Francoeur said. Many paddlers wear wetsuits in the spring to stay warm, while others layer up in synthetic clothing that will dry quickly if it becomes wet.

“The more you do to stay dry, the better,” Francoeur said. “I oftentime will have [clients] wear rain gear over non-cotton clothing.”

Carry an extra set of clothing in a dry bag, just in case you need it, and don’t forget food, water, first aid and other boating safety gear. Make sure you leave a detailed trip plan with someone who will check in on you and make sure you’ve returned, and consider paddling with another person or more for extra safety.

Learning skills — such as how to get back into your boat if it capsizes — can really boost your safety, Francoeur said. Through her guiding business, Castine Kayak Adventures, she teaches these skills in workshops on a regular basis.

“People just don’t know what they don’t know, and that’s the biggest thing,” Francoeur said. “When you have all those skills down, it’s super empowering because you can do more, but even so, you want to be cautious.”