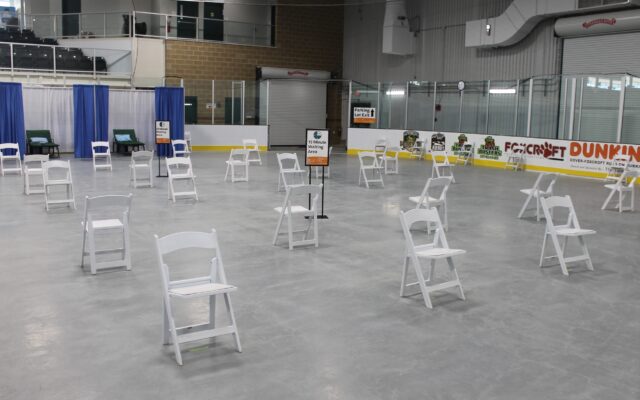 Contributed • March 31, 2021
By Jessica Piper, Bangor Daily News Staff AUGUSTA — Health officials are encouraging Mainers in their 50s to sign up for COVID-19 vaccines as scores of appointments remain available after the state received a record number of doses this week. The number of unfilled appointments comes as somewhat of a surprise after Maine’s early vaccine rollout was characterized by high demand, with seniors battling to get through clogged phone lines or overwhelmed websites to compete for scarce slots.

AUGUSTA — Health officials are encouraging Mainers in their 50s to sign up for COVID-19 vaccines as scores of appointments remain available after the state received a record number of doses this week.

The number of unfilled appointments comes as somewhat of a surprise after Maine’s early vaccine rollout was characterized by high demand, with seniors battling to get through clogged phone lines or overwhelmed websites to compete for scarce slots. Maine expanded vaccine eligibility to people in their 50s last week, but less than one-third of people in that age group have been vaccinated so far, according to state data.

There are several possible explanations for why spots are not filling as quickly as they were at the start of the pandemic and it is too early to say which was most likely, said Nirav Shah, director of the Maine Center for Disease Control and Prevention. But he said the unfilled appointments presented any opportunity for older Mainers to get vaccinated this week as “concerning” variants of the virus continue to spread in Maine and across the U.S.

“For those of you who are 50 and over, who have been waiting for your vaccine, this is your week,” Shah said.

The appointments come as Maine is receiving a record more than 68,000 first vaccine doses this week between the state’s allocations and doses sent to Walgreens, Walmart, Hannaford and newly added Shaw’s locations through the federal retail pharmacy program. It amounts to an increase of 47 percent compared to the previous week.

Shah said it was too early to say whether currently unfilled appointments suggested vaccine hesitancy, noting there could be other factors, such as people in their 50s finding it more difficult to schedule appointments compared to older age groups because they are more likely to be working during the day. Nearly two thirds of Mainers in their 60s have received at least one vaccine dose, as have about 80 percent of those 70 and older.

The CDC director also declined to speculate on whether the state would extend vaccinations to younger people sooner than April 19 if appointments go unfilled this week. Upward of 450,000 Mainers under age 50 who have yet to be vaccinated are set to become eligible on that date.

The state also plans to ramp up efforts to educate the public about the vaccine and continue to work on setting up clinics in areas where people may struggle to access the state’s larger vaccine sites, Department of Health and Human Services Commissioner Jeanne Lambrew said.

“We have not really needed to do much work in public education because people have been eager to get vaccinated, but now we need to join with different messengers,” she said.

As of Tuesday afternoon, Northern Light Health had vaccination appointments available at its Cross Insurance Center site in Bangor for Thursday and Saturday, according to its website. The hospital system also had upcoming appointments available within the next week in Portland, Dover-Foxcroft, Ellsworth, Blue Hill, Palmyra and Presque Isle.

A full list of sites offering vaccines is available on the state’s website. Eligible Mainers in need of assistance in scheduling an appointment may also call 1-888-445-4111.