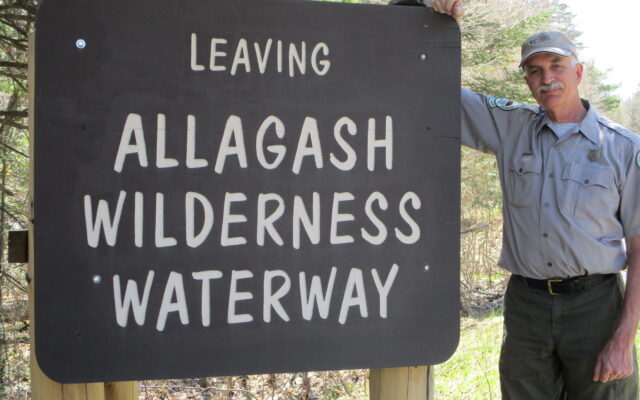 Contributed • March 31, 2021
By Matthew LaRoche, Allagash Wilderness Waterway superintendent After 44 years of dedicated service managing two of Maine’s most iconic rivers, I am calling it a career. I began my profession as an assistant ranger right out of the University of Maine as green as they come.

After 44 years of dedicated service managing two of Maine’s most iconic rivers, I am calling it a career. I began my profession as an assistant ranger right out of the University of Maine as green as they come. As I move into retirement, I see myself as the mentor, tutor and leader of a very dedicated group of waterway rangers. When I interviewed for this job as superintendent, I told the panel that one of my goals was to leave the waterway on a high note, and Lord willing, I will accomplish that goal.

I started my career in May of 1976, working at Chamberlain Bridge under the tutelage of Everett (Skip) Cram. Skip was very patient with me, teaching me the basic skills I needed to become a self-sufficient ranger. He would often invite me over for supper after work — I think he was taking pity on me because I wasn’t much of a cook in those days, and I didn’t want to slow down enough to cook a nice meal.

My next season on the waterway, I moved to Umsaskis Lake. I really enjoyed my time at Umsaskis as I was issued my own 20-foot canoe and motor and had more independence in the planning of my work. One of my favorite duties was to go downstream by canoe to Round Pond, clean the campsites and patrol the pond in the evening. I would then head back upriver to Umsaskis the next day. It was a bit of an adventure navigating over the remnants of Long Lake Dam and motoring up through the rapids upstream of Henderson Brook Bridge.

Umsaskis will forever be near and dear to my heart because I met my wife, Ruth, there. Ruth’s dad, Myrle Scott, was the supervisor of the waterway back in those days and waterway headquarters was located just up the road from my camp. I couldn’t help but notice this nice-looking young lady walking by my camp in the evenings. Long story short, we fell in love and were married two years later. That is one of the best things that ever happened to me!

After spending a couple of seasons at Umsaskis I was promoted to an Allagash Ranger and spent time as the roving ranger and at Churchill Dam. I really enjoyed my time at Churchill — I had my own section of the waterway that I was responsible for and got to meet most of the people that were canoeing the waterway.

About the time that our oldest daughter, Anna became school age an opportunity arose for a park manager position on the West Branch of the Penobscot. I interviewed for that position and was hired. I can remember how awestruck I was with the West Branch. Places like Ripogenus Gorge, Nesowdahunk Falls, Debsconeag Falls, Lobster Lake and the Upper West Branch. This was a lot of river to take care of with just two people at that time.

The West Branch was a good fit for me. There was a lot to do and a constituency from the Millinocket area that had been doing pretty much whatever they wanted on the lower section of the river for generations. I worked with Great Northern Paper, the Maine Forest Service and others making improvements to the campsites, access sites and rafting sites on the Lower West Branch. I also had my hands full keeping law and order and enforcing campsite rules for this section of the river. With consistent patrol, enforcement and help from the Piscataquis County Sheriff’s Department, I was able to gain compliance with the rules for this area.

The first time I ever went down the Upper West Branch I saw that a lot of work needed to be done. At that time, a campsite on the Upper West Branch consisted of a fire by permit only sign, a ring of rocks with trash in it for a fireplace and a couple 2 by 4’s nailed between two trees with boards nailed to them for a table. Over time, we upgraded the campsites to the same standards as the Allagash Wilderness Waterway (AWW).

I met many nice people while checking campsites along the river. Wiggy Robinson was one person who made a positive impression on me while I was on the West Branch. After Wiggy and I got to know one another, he invited me to go fishing with him at Slaughter Pond. It was quite an experience hiking into the pond from Kidney Pond, fishing the green drake hatch, then hiking out in the pitch black of night. We made several trips to Slaughter and other ponds every summer. We became good friends for the rest of Wiggy’s life. I never knew how well respected he was in the sporting world until a few years later when Inland Fisheries and Wildlife named the Legendary Guide award after him.

The Bureau of Parks and Lands created a superintendent of the AWW position in 2009. I interviewed for the position and was hired. It was like coming home for me, a job that I was well prepared for, that had new challenges and was personally and professionally rewarding.

I met with then Conservation Commissioner Pat McGowan and he gave me a list of priorities to work on, I stuck that list up beside my desk and diligently checked the tasks off one by one. I had a desire to do something to enhance the wilderness character of the waterway and bring people with opposing views about what the waterway should be together. So, we initiated an effort to restore a section of the tramway and we removed over 50 signs in my first year on the waterway as a wilderness character enhancement.

One of my proudest achievements as waterway superintendent has been to mold the rangers into a friendly and professional work unit that works to better the entire AWW, as opposed to six independent ranger districts.

This has truly been a dream job for me. I have enough managerial type tasks to keep mentally challenged and I can still take time to work with the rangers and get my hands dirty. As a side benefit, I have been able to canoe, fish, hunt and explore in the wildest areas of the eastern United States.

I owe a debt of gratitude to Will Harris and Tom Morrison for taking a chance on me when they hired me, to the rangers that regulate the area and work hard to keep the waterway clean and safe for our visitors. I am thankful for the support I have been given by BPL Director Cutko and my supervisor Ron Hunt. Most of all I want to recognize my wife, Ruth, for always being there to support me and making me look good, which at times is no small task.

In retirement I will be guiding outdoor adventures in the North Maine Woods and Moosehead Lake area specializing in canoe and fishing trips. See www.mainewoodsguide.com or give me a call at 207-695-2877.

LaRoche is superintendent of the Allagash Wilderness Waterway, a Registered Maine Guide and an avid outdoorsman. He can be reached at 207-695-2169 or at matt.laroche@maine.gov.