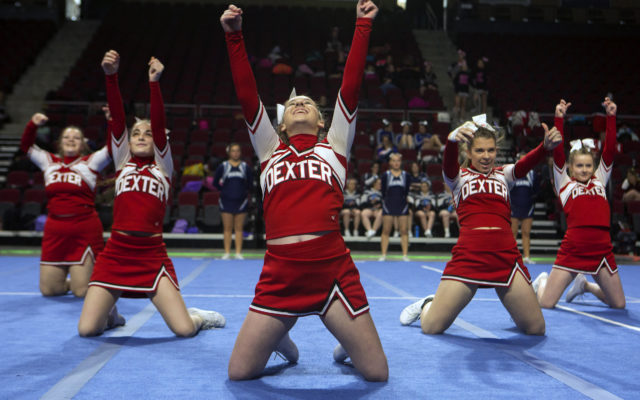 Staff, Piscataquis Observer • March 29, 2021
The COVID-19 pandemic forced the Maine Principals Association state cheering competitions to be held virtually in 2021. Teams had one chance to perform and record their routines earlier in the week and submit them.

The COVID-19 pandemic forced the Maine Principals Association state cheering competitions to be held virtually in 2021. Teams had one chance to perform and record their routines earlier in the week and submit them. Theses were judged and then the performances were livestreamed and the results revealed on March 27.

Three more teams from northern Maine rounded out the top five. Calais was third in the 19-team field with 47.6 points, followed by Central of Corinth (43.5) and Houlton (42).

Lisbon took home the state title in 2019, one year after Central had claimed the title.

There were three portions of the normal routine eliminated because of COVID-19 concerns: vocal performance, pyramids and the five-point showmanship category. That meant the maximum high score was 75 points instead of 100.

Sumner was seeking to become the first back-to-back Class C champ since Washington Academy of East Machias triumphed in 2007 and 2008.

Monmouth Academy had won seven state championships in Class D during an eight-year span before moving up to Class C in 2002 and claiming the C crown that year.

Southern Aroostook of Dyer Brook (32.7) and Schenck of East Millinocket (30.9) rounded out the top five in the 11-team field.

The Bangor Daily News’ Larry Mahoney contributed to this story.