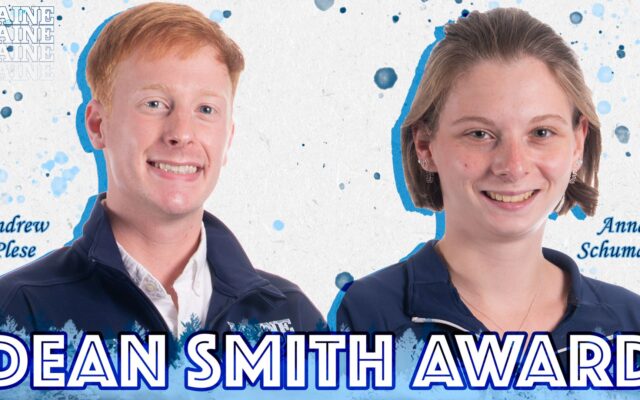 Contributed • March 24, 2021
By Pete Warner, Bangor Daily News Sports Editor Track and field competitor Anna Schumann and swimmer Andrew Plese of the University of Maine have been honored with the “M” Club Dean Smith Awards. The award is the most prestigious award presented annually to the top student-athletes at UMaine.

Track and field competitor Anna Schumann and swimmer Andrew Plese of the University of Maine have been honored with the “M” Club Dean Smith Awards.

The award is the most prestigious award presented annually to the top student-athletes at UMaine. Student-athletes, who are nominated by their coaches, must demonstrate outstanding academic and athletic achievement, be of outstanding character and serve as a contributor and leader in their community.

Seniors Plese and Schumann were honored Tuesday night during a virtual edition of UMaine’s Scholar-Athlete Recognition Awards Ceremony during which 370 student-athletes were feted for their accomplishments in the classroom.

Schumann is a two-year track and field team captain from Moers, Germany. She is double majoring in molecular and cellular biology and microbiology with a minor in biochemistry and holds a a 3.991 grade point average.

She is seven-time Dean’s List selection and six-time Presidential Scholar who during 2019-20 the University of Maine Center for Undergraduate Fellowship and during 2020-21 earned the UMaine Institute of Medicine Fellowship. She has spent free time she has assisting fellow students as a peer tutor in chemistry, organic chemistry and statistics.

Schumann was recently accepted into Cornell University to pursue a PhD in biomedical and biological studies.

Plese, from Richardson, Texas is a swimmer who is majoring in kinesiology and physical education — exercise science, with a minor in interdisciplinary disability students.

The four-year letterwinner swam events including the 650-yard freestyle, 400 individual medley, 100 and 200 breaststroke, and 200 backstroke. Plese won the Erin Woolley Memorial Award as the member of the team who best embodies the dedication and contributions that Woolley made to the program.

In the classroom, Plese was selected by UMaine faculty to serve as a student ambassador for the College of Education and Human Development. The four-time Dean’s List recipient was honored with the Palmer Plaque for Academic Excellence.

Plese has dedicated numerous hours to volunteer work at UMaine. Under his guidance, UMaine’s Student-Athlete Advisory Committee raised more than 3,000 in 2019 and $2,500 in 2020 to aid in the fight against food insecurity for the greater campus community.

He has volunteered in several community outreach activities including spending time at the Eastside Center for Health and Rehabilitation, The Institute for Orthopedic and Sports Rehabilitation, Relay for Life, and the Junior Black Bears Swimming and Diving program.

The “M” Club in 1992 named the award for former UMaine student-athlete standout Dean Smith of Dover-Foxcroft. In 1990, had the top grade point average among electrical engineering majors at UMaine and was the Northeast Atlantic Conference scoring leader in men’s basketball. He was a three-time Academic All-American, and he received the prestigious NCAA Walter Byers Award as the nation’s top scholar-athlete.