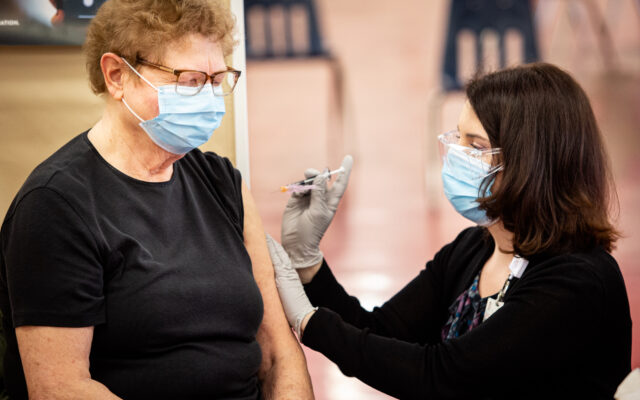 Contributed • February 26, 2021
By Jessica Piper, Bangor Daily News Staff AUGUSTA — Maine will extend coronavirus vaccination eligibility to roughly 200,000 more residents between the ages of 60 and 69 beginning Wednesday and change prioritization afterward to be based only on age, Gov. Janet Mills said Friday.

AUGUSTA — Maine will extend coronavirus vaccination eligibility to roughly 200,000 more residents between the ages of 60 and 69 beginning Wednesday and change prioritization afterward to be based only on age, Gov. Janet Mills said Friday.

Mainers aged 50 and up will be eligible in April, 40 and up in May, 30 and up in June and younger Mainers after that. That age-based system replaces a previous plan to prioritize adults with underlying conditions as well as some frontline workers after Mainers age 70 and older who are currently eligible, and would be the only one in the country exactly like it.

Nirav Shah, director of the Maine Center for Disease Control and Prevention, said Friday that the shift to an age-based approach was based on data suggesting age — even more so than serious underlying medical conditions — was the strongest predictor of severe illness. Ninety-eight percent of virus deaths in Maine are in people over age 50, he noted. Maine is the nation’s oldest state by median age.

“We found that the data kept pointing back to age as the strong indicator of death or severity of illness,” Shah said.

The change would also make it easier for the state to administer additional vaccines quickly, citing concerns that occupation-based categories would be more time-consuming to verify, Mills said. The Democratic governor noted vaccines could be extended to younger Mainers sooner if the state’s capacity continues to increase.

“It replaces the prospect of complicated eligibility rules like those based on your type of work, or on specific medical conditions, the verification which I’m very concerned will become difficult to implement and could inadvertently slow down the process,” Mills said.

Maine will also set up specified vaccine clinics for K-12 teachers, Department of Health and Human Services Commissioner Jeanne Lambrew said. But there is no priority otherwise for teachers or other new occupations. They can only be vaccinated if they are eligible by age.

The switch to an age-based system sets Maine apart. No other state has gone to one after vaccinating nursing home residents and certain essential workers, according to the Kaiser Family Foundation, a nonprofit health research organization. California announced a switch to an age-based system in late January but backtracked, allowing adults with certain health conditions to be vaccinated alongside older people, CalMatters reported.

Some states have taken similar approaches, however. Connecticut is using primarily age-based criteria, Gov. Ned Lamont announced last week, but is also vaccinating K-12 teachers and childcare workers. Rhode Island is not prioritizing frontline workers other than health care workers and first responders, but plans to vaccinate adults with certain pre-existing conditions after those aged 60 and up are vaccinated.

Mills acknowledged that Maine’s plan differs from other states, but argued the approach “will benefit the most people named the soonest” given the state’s older population. Maine has the oldest median age of any U.S. state, about seven years higher than the median age nationally.

The change in prioritization comes a day after the state announced a substantial increase in its weekly allotment of vaccines from the federal government, and as U.S. regulators consider approving a new, one-shot vaccine from Johnson & Johnson that could speed up the process.