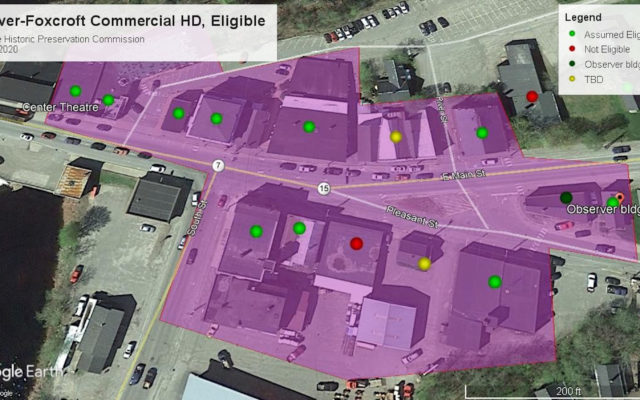 Stuart Hedstrom • February 23, 2021
DOVER-FOXCROFT — A project being led by the Center Theatre to create a National Register Commercial Historic District in the downtown received a measure of support. The Dover-Foxcroft Board of Selectmen voted to support a nomination for the district during a Feb.

DOVER-FOXCROFT — A project being led by the Center Theatre to create a National Register Commercial Historic District in the downtown received a measure of support. The Dover-Foxcroft Board of Selectmen voted to support a nomination for the district during a Feb. 22 meeting held over Zoom.

“What we’re working on is a National Historic District for Dover-Foxcroft,” Center Theatre Executive Director Patrick Myers said. He said the project information and a map of the proposal is available at https://www.centertheatre.org/dfhistoric-district. A remote public hearing is scheduled for 6:30 p.m. on Wednesday, Feb. 24, at https://us05web.zoom.us/j/85708784745?pwd=Z3dqZmlwK2xTV25MUnBDV0lOWjlnQT09.

The map shows the proposed district outline as suggested by the Maine Historic Preservation Commission. The area could include as many as 14 buildings from In the Woods (the former site of Mr. Paperback) on East Main Street up to the Observer Building Museum at the intersection with Pleasant Street. The Observer Building Museum is listed individually on the National Register of Historic Places, which is a different designation than a National Register Commercial Historic District.

“When your property is included in a [commercial] historic district there aren’t any strings attached,” Myers said. He said property owners could paint their building pink or tear it down and the National Register would have no input.

Other benefits include historic tax credits (20 to 55 percent) for the rehabilitation of historic buildings in the district, a National Register Commercial Historic District would promote community and encourage visitors, plus projects in the area can be eligible for specific grants and funding.

The negatives listed on the project information page on the Center Theatre website explain that if there are federal dollars or federal permits involved in a project in the district, there is paperwork and a review by the State Historic Preservation Office. But it is only a consultation. They can offer suggestions, but have no ability to change or impede the project.

“This district will not add any burdens or restrictions to any project that goes on in there,” Myers said. He said he has spoken with 10 of the 13 property owners in the proposed National Register Commercial Historic District, with nine being in favor and the other being undecided.

Myers said the Center Theatre is pursuing the project because as a building within an historic district, the organization will qualify for grants and funding not otherwise available. The first anticipated project using this funding will be to improve the columns and exterior of the building facing the Piscataquis River.

Thanks to a grant from the Maine Historic Preservation Commission, the Center Theatre is working with Scott Hanson of MacRostie Historic Advisors, who will consult and help with the application process for the project. He has previously worked in town with the Moosehead/Mayo Mill project.

The project timeline would be from nine to 12 months with various application approvals needed including from the State Historic Preservation Office and National Park Service, Myers said.

When asked about any financial commitment from the municipality, Myers responded, “There are no burdens or liabilities on the town.”

“The only time any regulatory overview would come into play would be if a property owner would seek state or federal historical tax credits for their property,” Hanson said.

In other business, Town Manager Jack Clukey said an application to the Maine Department of Environmental Protection for trust funds for bridge/culvert replacements was successful. He said the agency has awarded the maximum $125,000 to go toward the replacement of the Grove Street bridge.

“We were awarded the maximum on the Grove Street project, $125,000, so that will go a long ways,” Clukey said. He said the equivalent in town funds can be used for other needed work.

Board members had a copy of the proposed 2021-22 municipal budget in their meeting packets. Clukey said the current version of the spending plan includes deferred capital item purchases, a new wheeler plow truck for public works, bridge capital improvements and daytime staffing for the fire department.

The net difference in the budget compared with last year is $105,671 or 3.78 percent. The estimated change in the mill rate, including the county assessment, is an increase of 1.49 percent.

The next phase is to move it to the Budget Advisory Committee, which will start meeting next week.

The committee is scheduled to work remotely over the first four Wednesday evenings of March, likely starting at 6:30 p.m. The annual public hearing is tentatively set for Wednesday, March 31, but the full month’s schedule will be decided on during the initial March 3 meeting .

In his report Clukey said Northern Light Mayo Hospital has its next vaccine clinic scheduled for Saturday, Feb. 27, in the gymnasium at the Morton Avenue Municipal Building. “They found it worked much smoother than they thought it might,” he said.

The town manager said the clinics would likely move to Fridays in the future and “their schedule will depend on what they are allocated.”