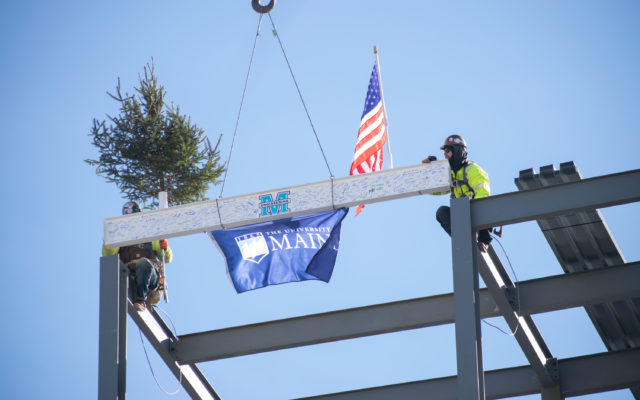 Contributed • February 18, 2021
By Nina Mahaleris, Penobscot Times Construction workers raised the final beam completing the steel structure of a new $78 million engineering building at the University of Maine on Feb. 12.

Construction workers raised the final beam completing the steel structure of a new $78 million engineering building at the University of Maine on Feb. 12.

UMaine representatives and members of the design and construction team presented the project in a small outdoor ceremony, which was also live streamed via Youtube.

Construction of the three-story 107,000-square-foot facility began in May 2020 and is expected to be finished by next summer. The building, which will be called the Ferland Engineering Education and Design Center, is named after James and Eileen Ferland of Skowhegan. James Ferland is a 1964 alum of the university.

Their $10 million contribution to the project is the largest single gift in UMaine history. The state of Maine allocated $50 million to the center, along with a donation from the Harold Alfond Foundation. A total of $25 million was privately raised for the project.

The building will house various programs in the College of Engineering such as mechanical and biomedical teaching laboratories and research spaces. The building’s main feature will be a project design suite with 48 workbenches where students can complete their independent projects.

UMaine College of Engineering Dean Dana Humphrey spoke before the small crowd of people who witnessed the final beam raising in person on the sunny-but-cold afternoon.

Representatives from Consigli Construction of Portland and WBRC Architects/Engineers of Bangor also joined Humphrey in the ceremony.

Approximately 78 UMaine graduates are involved in the design and construction of the new building.

The painted beam, which was covered in signatures from university members, was hoisted up to the top of the steel structure — on top of it, a small evergreen tree and an American flag. A University of Maine flag was attached to the bottom of the beam.

A time capsule containing messages and a Crosby Clip was also welded to the back of the beam. The clip — which is used in steel construction — was invented by Dexter native and UMaine mechanical engineering alum Oliver Crosby.

Crosby graduated from the university in 1876.

The college also plans to hold a dedication ceremony after the building is finished next August — on the 150th anniversary of the first UMaine engineering graduate, Benjamin Gould.

The center will be a gathering place for all engineering students and faculty, Humphrey said. “This is going to be the best space of its kind in the northeast.”

The space is a necessity for the university’s engineering program, he said. There are currently four engineering buildings at the Orono campus, but the college needs more space to host its growing population.

The College of Engineering has grown more than 70 percent since 2001, according to Humphrey.

Maine also has a desperate shortage of engineers, he said. For every single engineering graduate, there are at least two or three job postings available. The university’s job is to take that increase of graduates and meet the demands for the state of Maine, Humphrey said.

“This is a fantastic milestone for the UMaine community and the state,” UMaine President Joan Ferrini-Mundy said. “This Engineering Education and Design Center will be key to helping meet Maine’s workforce and economic needs. And we will have a beautiful facility to help attract diverse and innovative students from Maine and beyond.”

“This is going to be the focal point for engineering education at the University of Maine,” Humphrey said.