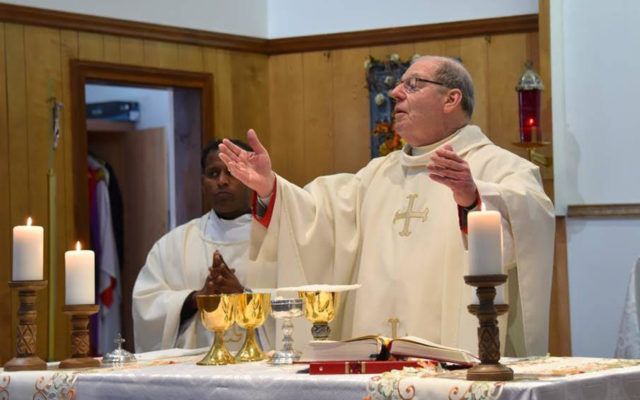 Bishop Robert Deeley said Thursday the diocese has asked for the governor to permit churches to fill up to 25 percent, but that those requests have been rebuffed.

Under a previous order, no more than 50 people could gather in a Maine house of worship. Now that limit has been raised to five people per 1,000 square feet or 50, whichever is greater. That’s the same as retail stores.

But the diocese said that fewer than 10 of the 141 Catholic churches across the state will see their capacities rise under this order.

“This ruling is unacceptable and does nothing to provide relief to our parishes and parishioners. Many Maine Catholics who were frustrated by the previous limits are now perplexed and upset. The governor must reconsider this and go to a percentage model,” Deeley said.

Deeley said that Vermont, New Hampshire and Connecticut have permitted churches to fill up to 50 percent capacity, while more than 30 other states place no restrictions on indoor religious gatherings.

“It is difficult to understand the state’s position when we have shown that we can successfully operate our churches and schools, which offer five days of in-person learning per week,” he said.

The governor’s restrictions on indoor religious gatherings have been a lightning rod for criticism. One church, Calvary Chapel of Orrington, sued Mills over those limits last May, saying that they violated the First Amendment and Mainers’ religious liberty. A federal judge sided with Mills in that fight, and an appellate judge later upheld that decision.

Despite the criticism over those restrictions, most churches complied with the order to limit transmission of COVID-19, the illness caused by the coronavirus. Maine’s Catholic churches were among those that adhered closely to those limits and others imposed by the diocese.

The diocese said Thursday that no virus outbreaks have been traced to any of Maine’s Catholic Masses. Several churches across the state, including in Brooks, Calais and Sanford, have been linked to widespread virus outbreaks.

Deeley’s criticism comes as Catholics across the state mark Lent, a significant six-week period of religious observation when Christians prepare to commemorate the passion, death and resurrection of Jesus of Nazareth.

“Not having daily and weekly access to the Eucharist, the very presence of Christ, has been a great hardship for thousands of Maine Catholics, particularly when our neighboring states are allowed to provide this opportunity. Our parishioners have suffered enough,” Deeley said.